We're Having an Earthquake. And a Beer.

We were well into hour three of a five hour meeting in downtown Annapolis.  I had been pounding coffee all morning and was starting to get shaky.  Too many things to do.  Too hard to sit still.  A five.hour.meeting.  The woman beside me said, "Did the floor just shake?" and I answered, "Sorry, I was probably bouncing my leg."  Out of curiosity, I bounced my leg on the floor........nothing happened.  Weird.  About three seconds later, the entire building moved, and didn't stop moving.  Quietly but sharply, the same woman announced, "We're having an earthquake."  We all instantly stood up and looked at each other.  Our director calmly said, "Alright, we should leave now."  The building's fire alarm went off.  We went down, down, down the stairs and outside.

The state capital closed. County offices closed.  Gas lines ruptured. Brick walls cracked.  Police and fire vehicles crawled through suddenly gridlocked traffic.  But really............nothing much happened.  Here's what the carnage looked like - warning - you may not be prepared for this truly gruesome imagery:

In short, happy, well dressed people enjoying a beautiful afternoon in coastal Maryland. Yes, they are sitting outside for fear of these buildings imploding, but as you can see, they don't appear to be terribly stressed. The Ram's Head was still open and serving beer on their patio, so that is where we went, pending our building manager's decision to officially close the building until he can get a structural engineer to inspect the damage.
Getting home was kind of a disaster, since all bridges and tunnels had to immediately be inspected for damage. But again, this was a pretty minor deal, as natural disasters go.  A 5.8 richter scale quake, roughly 1/10,000 the intensity of Japan's recent quake (or so they are saying). Not harmless, but minor, right? Well, once I turned on the television at home, it seemed like they were reporting on an entirely different event.  I mean, really.

In the end, all I can do is offer this one piece of hope for all of you fellow hurricane survivors out there: 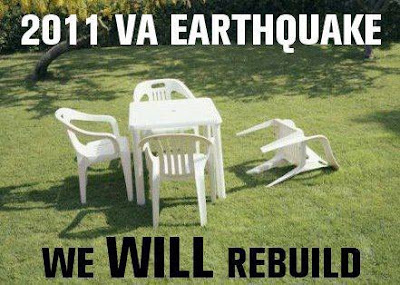 OK, or maybe this: 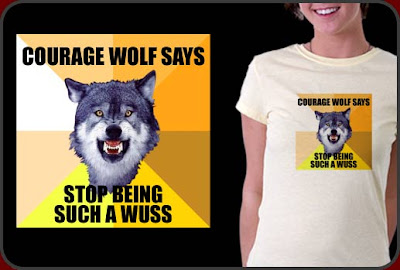 The photo with the chairs made me laugh. Ya'll might be in for a hurricane here shortly though.

Yes, quite an earthquake! I was reading a book out on the back patio, and the wicker couch bounced a little. Immediately, being such an old feeble fart as I am, I figured I was having a vertigo attack, or maybe even a heart attack, since it was a very weird sensation. I put my head back, ate a butterscotch candy, and hoped whatever was wrong with me would pass. I didn't even realize it was an earthquake until I went inside a couple of hours later and they were STILL talking about it on the TV. The reporters were all like "People in New York, as usual, are taking it all in stride. We stopped several people on the street and they were going back in to work and saying 'yeah, whatever.'"
I just couldn't figure our why the reporters were still trying to talk to the man on the street three hours after the (non-) event.
Anyway, it was a little traumatic to some people in the City who had to walk down 50 or 60 flights of stairs in their self-evacuation, shades of 9/11, and THAT probably wasn't too much fun. I still don't know: is it better to stay put in the skyscraper or walk down 40 or 50 flights of steps during an earthquake?
PS - TEDDY was all stretched out on the concrete floor of the patio and HE didn't even wake up!

Yep - a brutal event. It shook pretty hard in Accokeek, but the only real clean up I had was to straighten 4 pictures at home

Well, why not have a beer during an earthquake???

oh, delightful. The lawn furniture shot went straight to facebook. Bless you for your lack of hyperbole. =) One of my husband's facebook friends reacted to Bear's post re: the California quake citing the 2 quakes and the hurricane "When will it all end?!?" And I instantly thought "when you're dead."

Happy to be alive and kicking and witnessing these super cool, fascinating, and humbling Earth events. Bring it! =)

I'll admit, when we busted out of the fire door and EVERY ALARM IN THE STATE CAPITAL was going off, plus all the sirens, it was pretty eerie. Especially on such a beautiful day.

But after about 10 minutes of nothing else happening, people were just chatting, eating pizza, and complaining about the lack of cell service.

BRING IT! indeed.....now for the hurricane!