This year's summer garden was a great lesson in "You get what you put into it."  In the case of my garden, I didn't put a whole lot of time and effort into this summer's veggies.  Part of my excuse is the ubiquitous "life," but the other part of it is that I worked hard to improve the beds and soil last summer, last fall, and this spring....and luckily those efforts still paid off a little bit this summer.  Still.......a little disappointing.

What went wrong?  While I still need to do a soil test (and suspect a very low pH), the weather was a killer.  We went from a cool, wet spring to an extremely hot and droughty June and July, to a very wet August.  Not good.

The invasive brown-marmorated stinkbug was predicted to be bad this year, and the species lived up to its billing - sucking plant juices out of tomatoes, peppers, okra, and even purple millet (left).  There are very few chemicals that can even touch the nasty little bugs.

The Roma tomatoes were pretty resilient to the stinkbugs, but were also victimized by mockingbirds, raccoons, and rats (although Amy did manage to make some delicious salsa and . The peppers got off to a horrible start, and are still lagging behind. The cucumbers, for the second straight year, were weak at best. The okra came out dry - just skin and dry seeds. The herbs did okay, the wildflowers did okay, and the squash would have been perfect, had I picked them every other day instead of once or twice a week. Still, we had food to eat. We still have buckets and buckets of sweet potatoes on the way.


The summer plants are dying.  Fall is on the way. In the next two weeks, I'll be putting cover crops in - oats and field peas this winter.  We'll do some more lettuce and spinach as well.  And this year, I have hoops to keep them warm into November or December. What will I do differently next year? It's too early to tell.  Going no-till was a great success.  I spent far less time weeding the garden in 2011, compared to 2010. The soil, based on appearance alone, is far superior to what's sitting in conventional tilled farm plots just a few feet away.  Occasionally, I still find roots and stems from 2010's gardens.  Organic material is great for the soil! I hope to send the soil out for testing in October to see if I need to be doing anything differently.

However, it was pretty clear that another experiment - staging my spring plantings at different times under the lights - did not really cause an extended harvest, as I had hoped.  That knowledge will reduce the stress and complexity of my February, 2012 indoor plantings.

One thing that should improve is Hank's ability to hang out while I'm gardening next year - he'll be going on THREE years old - can you even believe it?  He is becoming very interested in "helping," and while the quality of the assistance rendered is dubious at best, it's awful cute. 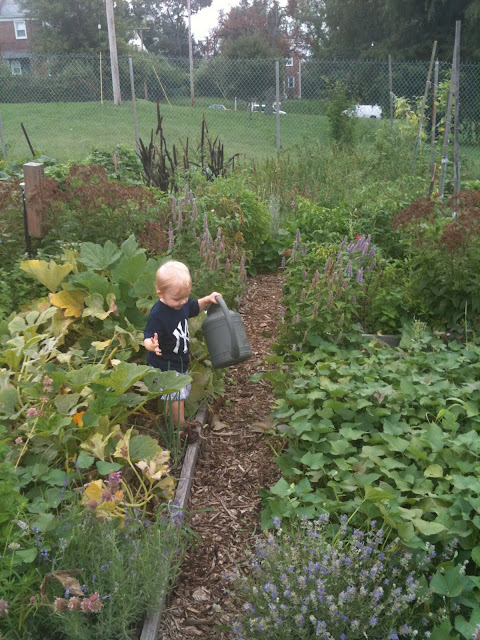