That Rain was Getting Out of Hand In the last two weeks, we've had a hurricane (Irene), an earthquake, and a tropical storm (Lee), with another tropical storm (Marina) on the way. And yes, I refuse to post pictures of flooding.  What I need to know is whether to expect locusts or zombies next - I'd prepare very differently for either! The farms, fields, and forests are overwhelmed with mud and water. The Chesapeake Bay is muddy, and carrying a giant field of debris downstream to the ocean.  On most days, is at least partly covered by small craft advisories. Ponds and streams are a disaster.

My last trout fishing trip, around August 1st, found a cold but healthy small stream at 40 CFS. Hurricane Irene's rain took it to 1,500 CFS about 10 days ago. Now TS Lee has us at 6,000 CFS. I don't even want to know what that stream looks like! 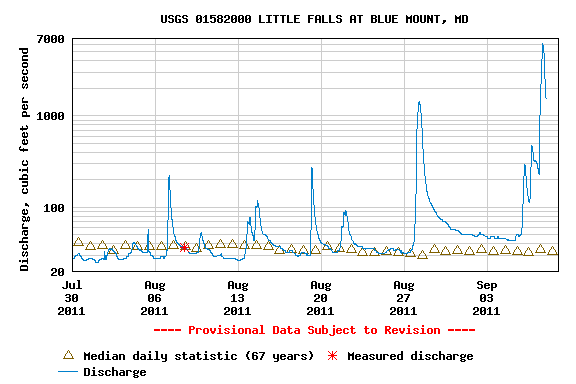 It seems like a few times a year, I have to blatantly complain about weather. You see, getting outdoors is religiously important to me.  Spiritually important.  Getting 2 feet of rain in a 2-week period (and being without electricity for 5 of those days) does not help me get outside any more often. It makes September birds and deer act funny.  It makes very hungry fish act not-so-hungry.  It turns playful September ocean waves into a riptide death trap.  And I am running out of dry GoreTex. And just in time....here comes the storm debris from central Pennsylvania and upstate New York.  I'll go ahead and say that bay fishing is done for another two weeks......at least.

I was getting  close to cutting back on blog posting when the rain finally subsided - this is primarily an outdoors blog, and there'd been nothing going on outdoors.  Except rain. And flooding.   Hopefully, the sanity, and the time afield, will return soon.  Until then?

LOVE that you posted actual data to offer perspective.

And I always wondered about people who fished in San Diego bay. Do you really eat those fish? Do you realize it's in the top 3 most polluted bays in the nation (among those tested)? And surfers taught me NEVER go into the ocean during or the first few days after a storm. eep!

I hope things clear up soon. =) Recent outdoor escapades or no, still an enjoyable post. =)

Had to find a news article relating to Oxygen and water quality for one of my Fisheries classes last week. Found something about small, localized fish kills in North Carolina and other places affected by the tropical storms. Oxygen crashed from the breakdown of all the debris getting washed into ponds/streams.

Alex - Not yet. It may be coming. We're all wondering what all of this debris will amount to, in a chemical and biological sense.

Bio - I will eat migratory fish out of the Bay. Some of my fishing buddies won't!

I must agree, I to became overly tired of the gray skies and nearly constant rain. It was wonderful to get get out in some sunshine this week for a change.

Coy - I think it's getting ready to rain some more!!!

Oh, to be a mushroom farmer this fall!