So, we've already chatted a bit about black roses.  Namely, how black roses are a figment of comic book fiction for a variety of reasons.  But pointing to just one species - even as ubiquitous as a rose - and claiming that "black flowers are impossible" - is not really scientific.

According to an extremely dubious internet reference, black and nearly-black flowers are extremely rare in nature, occuring in about two tenths of one percent of flowering genera.   And it's generally understand that the most common flower colors in nature are probably green, followed by brown, white, and pink.
Not exciting.   So let's listen to some music - here's Two Hearts Down by Knoxville's The Black Lilies:


Yeah, yeah, I know it's not technically psychobilly but bear with me here.  Why wouldn't black flowers be more common in nature?  Maybe it's impossible for plants to synthesize "black" pigment - although I certainly can't find anyone to scientifically state it.  Well, if you look at natural features as "nutritional choices" made by organisms, it's hard to see what a black flower gets you.  For wind-pollinated plants, producing a black flower would be a total waste, unless the color black scared away predators of the plant.  What about insect-pollinated plants?

Here's where it gets interesting - insect pollinators want to know where they are supposed to go to get the pollen.   The best pollinator plants are those that can visually guide bees in and literally provide a landing pad.  Here's a few examples of highly effective insect pollinated flowers: 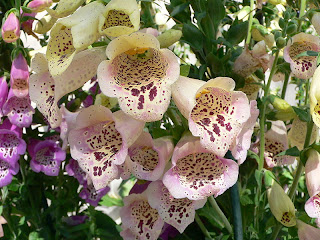 Right. So we can quickly see that bee- and butterfly-pollinated flowers are not going to be black. What else pollinates flowers?

That's right - flies! But most species of flies aren't looking for pretty flowers. They're looking for this:

Roadkill.  So as it turns out, a fly-pollinated flower doesn't have to look like any particular thing, as long as its color doesn't make it appetizing to herbivores who might eat it.  Nope. Fly-pollinated flowers just have to stink. A lot.   And while this doesn't actively (genetically) promote black flowers, it means that for many species, the color just doesn't matter - which means that black flowers won't automatically be eliminated from the gene pool.  And there's our 0.2% of flowers.  "Not eliminated from the gene pool." Can you feel the love? Well, since you're here, you may as well meet a few of them!

The Kamchatka Lily - a Frittilaria 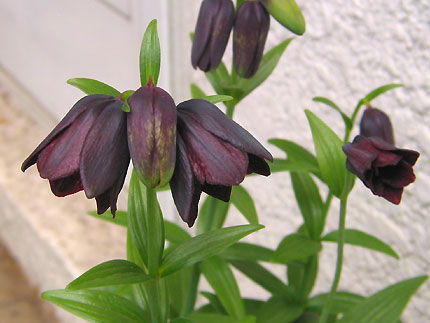 The Black Lily or "Stink Lily"