Psychobilly Outdoors - What Lives in The Graveyard Tree

Every self-respecting psychobilly band has a song, or at least sings a song, about a tree in a graveyard.  It's Psychobilly 101.  And it's actually an awesome study, because some amazing things in nature tend to be found in graveyards.  Things that should make graveyards even more special to human beings than they already are. But first, the music. We'll start with Detroit's Koffin Kats and their Graveyard Tree....

Over the last 20 years, a whole slew of studies have been published that document how valuable graveyards are....to biodiversity.   One of the first I ever read, back in 1996, was a press release from the Australian government entitled, "Biodiversity lives where the dead people go."  A little salacious for scientific work, but it highlighted a survey of cemeteries that displayed, among other things, plant species long thought extinct, often growing in cracks in the concrete.  Soon after, I read a scientific paper (that I can't find now, of course) documenting how Boston's greatest diversity in bird species could be found not in its coastal marshes, not in its nearby forests, or its many parks......but in its old cemeteries.

Last year, the BBC published a piece entitled "Urban biodiversity beyond the grave." As the cryptkeeper in the video (highly recommended, unembeddable) says, "If you didn't have the graveyard, this would be a smoky factory." Even the National Wildlife Federation got in on the action in their 2008 web post, "Peaceful Islands of Biodiversity."

So what's actually going on here?  Biodiversity is a function of the number of species present in a place, compared to the number of individuals present for each species.   So, why cemeteries?  Let's look at it visually. Notice that it's mowed, there is some vertical structure (tombstones to perch on, sarcophogi to bury under), and it doesn't appear to be overgrown.  That, my friends, is what we call an "early successional habitat," which are generally known to be the most biodiverse habitats on the planet (with the exception of some rain forests and a few types of forested wetlands).  In fact, to a bird or small mammal, the above image doesn't look much different than this:

Or this - an alpine creek bed, from Scott Ranger's Alaska Blog: 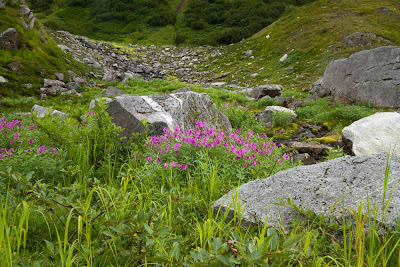 So, you get my point.  Cemeteries are also a refuge from human activities like burning, hunting, fishing and spraying herbicides, so it makes cemeteries very welcoming to urban wildlife!

So the next time you have the somber task of visiting a cemetery - look around you.  Look at what trees and flowers are growing there.  Which birds are singing.  Whether chipmunks or other critters are scurrying about.   It's hard to think of these places as "the outdoors," but to so many urban species, they represent a great hope for decent habitat.   And who knows what lives where the moss slowly grows?

Only you can write about graveyards and learn something ;)

Super great points. Graveyards and sewage ponds, two very popular stops on birding tours, one comes to learn. =) I love that you go to cemeteries to find life. How did you know about them not using herbicides? Is that typical??

oh, p.s. the comparison pics re: what habitats look something like graveyards were TOO cool. =) Nicely done!

LB, I'll take that as a compliment.

BB - herbicides - simply a factor of economics. Cemeteries are based on a horrible business model (the clients are dead!!) and they tend to constantly lose money - so the maintenance is usually limited to mowing, large rodent control (groundhogs, rats), and trash pickup. No Round-Up. No insecticides. No money!