What's the Sunday Hunting Ban Really About? (Part I) 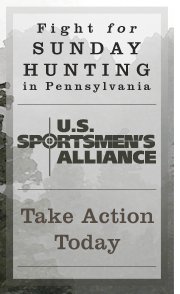 ﻿﻿﻿﻿
﻿﻿Sunday hunting. To some, it conjures up memories of days afield with kids who have a once-a-week reprieve from school and sports. To others, it is yet another signal that America is moving away from being a society that encourages us to spend time at church and at home on Sunday. Funny thing is, there’s no geographical relationship between Sunday hunting and church involvement, as some of the most spiritually conservative states (Georgia, Alabama, and Mississippi) allow Sunday hunting, and some of the states least dominated by churchgoers, like New Jersey and Maine, still have Sunday hunting bans in place. Personally, I believe that God is a little more put off by human activities like genocide, murder, pedophilia (especially when protected by churches), and global drug and arms trafficking, than he is by a parent taking their child out in the woods on Sunday to stalk a rabbit. So now you know where I stand.

From a purely logical standpoint, the Sunday hunting ban no longer holds much merit because other activities involving willful animal harvest – including commercial and recreational fishing, crabbing, lobstering, clamming, and shrimping…to say nothing of commercial slaughtering ….are permitted on Sunday in every state, and indeed, opponents of Sunday hunting participate in these activities. To say that hunting is different simply because it involves a lead bullet instead of a steel bolt (cattle and hogs), steel hook (fishing), or neckbreaking (chickens) is pretty silly. But we’re talking people, property rights, gun rights and religion.........not logic.  So let's move on.

History of the Sunday hunting ban
The Sunday hunting ban is literally older than this country. Massachussetts led the way in 1635. Granted, in that era, they also “led the way” in the then-burgeoning field of witch killing, so I don’t know how much we can speak to the wisdom of other regulations passed at that time! No new Sunday hunting ban has been enacted since 1909 (Oklahoma, repealed in 1989). In fact, as of 2011, only 11 states have any substantial restriction on Sunday hunting at all.

So why does it matter?


Honestly, in the 31 states that have no Sunday hunting ban, and the additional 12 that have some sort of Sunday hunting provisions in at least some part of the state, it hasn’t mattered. Game populations have not collapsed. Churches have not gone unattended, or been forced into foreclosure. Conflicts with non-hunters have not escalated in any way.  We know that much to be true.

But the studies of existing Sunday hunting programs don’t show a remarkable increase in recruitment or revenue as a direct, simple result of Sunday hunting. Again – we’re talking people, not logic. Again - has Sunday hunting really mattered? I haven't read any research that dramatically says, "YES!" either positively or negatively.

Those agencies, groups, and hunters most in favor of Sunday hunting point to endless, exhaustive studies that show the potential for increased out-of-state license and stamp sales, travel bookings, and increased hunter recruitment. They are (rightly) nervous about the aging of “the average hunter,” and unlike most of the public, they know that hunters and anglers pay for conservation, both through licenses and taxes, as well as through memberships and donations to conservation organizations. Poor hunter recruitment is bad news, and these folks want to pull out all the stops – one of which is Sunday hunting.

The folks most opposed to Sunday hunting choose to focus on the potential negatives. For animal rights activists, any expansion in hunting rights is a defeat. For those who hunt deer with dogs, Sunday is a day that other hunters could be chasing deer without dogs – a disadvantage to their own hunting, specifically.

Some professional hunting guides oppose Sunday hunting because it could lead to a reduction in the total length of the hunting season (number of hunting days), which is bad business (you can only guide so many hunters per day, after all, and if everyone's hunting on sunday, then nobody's hunting on monday).

For the public, 90% of whom do not hunt, it’s a confusing issue that might conjure up more fear of firearms injuries……if the general public spent much time outdoors at all. For most of them, hunting and fishing remain very foreign activities in which they have never, and will never, participate. Truly a sad state of affairs.

I know the proponents of expanded Sunday hunting love to talk about all the great things that “could” happen, but the realistic bottom line is that none of the negative impacts and few of the positive impacts have been realized. In the next two posts on this topic, we’ll discuss how the pro and anti-Sunday groups figure into the debate, and where it’s likely to lead in states like Pennsylvania and Virginia – both of whose state wildlife agencies endorsed Sunday hunting for the first time in 2011, but where the Sunday hunting ban still stands anyway.

In the process, I will probably piss everyone off, but hopefully will leave you with some thoughts about the real reasons behind the Sunday hunting debate, and where it’s likely to head in the next several years.

Crazy. If Florida had Sunday hunting bans, I probably wouldn't have hunted at all during middle school and high school. It was my only day of 'rest'.

I'm certainly thankful that's not the situation down here.

It is kinda strange though. I've hunted in lower Alabama and much of the Bible belt and you'd think -that- would be where something like that would happen.

Mainers are idiots . . . we continue to wallow in our own stupidity around this blue law. We want to encourage and support small business in this state? What are guide businesses and Ma and Pa store operations? Hunt two days in New Hampshire or one day in Maine? You decide.

Great post! This gives a person a lot to think about, and more so the history behind it. When I did my two part post on it I mainly just looked at the current status and my opinions. I think you even commented on it. WV left it up to each county to decide, but once the counties voted (and mine and most of the surrounding counties voted against) it's all but set in stone. This is mainly because of what it would take to just get it back on the ballot, not even to get it passed.

Here are my two postings on this topic, feel free to use anything you want from them.

In Connecticut we have one of these quaint laws. Should have gone the way of the buggy whip.

Alex - that's certainly the idea behind making the changes. Almost all kids (at least in the 'burbs) play saturday sports these days.

Rabid - I can't figure out Mainers. It's like a prudish Liberal Tea Party up there!! And the "which state do I visit" conundrum is exactly what states (with the ban) like NC and PA are concerned about.

Justin - that's similar to what Maryland has been doing for private land archery hunting. It hasn't been perfect but we now have maybe 8 out of 18 counties with "some" sunday provisions, at least for deer/archery.

Steve - I agree, but in my home state (VA), even the hunters have been slow to come around. Only last year did a slim majority of hunters finally favor it, which is what prompted the game department to change their recommended policy.

Thanks for the comments, boys!

There are some fairly large lobbyists group that are associated with the agricultural community. They are opposed to Sunday hunting and have been a major roadblock to sunday hunting. Why? I have no idea why a Farm Insurance/Lobby group would be so dead set against Sunday hunting. They say their landowners do not want to be pestered on Sunday with people asking permission to hunt, or from having to chase of trespassers. If someone is going to trespass, they're probably already hunting on Sunday as well. The lack of outdoor hunting opportunities, especially on Sunday, was a huge reason why I left Virginia.

Interesting and informative post as well as well thought out and well written.

As a Pa resident, hunter, and landowner I am very much interested in the outcome here. Personally I have to deal with trespassers and road hunting slobs who care not a lick about personal property. However for the most part these same people do seem to respect the Sunday hunting ban.

Thanks for the good post and I look forward to reading more.

Thanks for posting about this issue. I was raised in Oklahoma in the 80's and remember the blue law for Quail, but it didn't apply to Deer since we only had a 9 day season. I seriously thought we were the last to remove it. I hope this law is also removed from the books to allow more sportsman more time in the woods.

Wish I had seen this post earlier. The Sunday ban has pissed me off ever since I moved here from the Rockies. In CO we could hunt on Sundays, but we couldn't buy booze. Here, drink all you want, and go fishing, because you can drink while fishing, but for goodness sake don't do something where you need to be sober, like go hunting. It's a stupid law, and there is logical argument supporting the ban. Of course, anti-hunters never were much for logic.