It's Time for Maryland Sweet Potatoes It was just not a banner year for the garden, and in many ways I'm ready to stop thinking about it and to start planning 2012's garden.  Other than planting cover crops for the second time (first round eaten by birds and rats), the only significant task left in the garden was to pick sweet potatoes last week.

Technically, you are supposed to pick sweet potatoes after the first frost, when the vegetation wilts.  However, in 2010, that didn't happen until December 1st, and I had about a bushel of wormy (but otherwise tasty) Beauregards to show for it.   I grew about 3x as many this year, and did not want to have any kind of pest-induced crop loss.

So I picked them.  There was a lot more "below ground biomass" this year than in 2010, but a lot of the growth went into runty little potatoes.   I ended up picking about 3 bushels worth, of which about 2 bushels are market size potatoes.   My cost incurred for those potatoes was about $6 - I planted about 12-15 clones from 2010's crop, and bought 3 new plants ($2 each) as a backup plan.  I think we got about $40 worth of sweet potatoes.  And oh yes.  They are being used. And this is where my wife, the indomitable Sadie Priss, comes in.  And by "comes in," I mean MELTS YOUR FACE OFF WITH THIS RIDICULOUS SWEET POTATO CASSEROLE. Ahem. 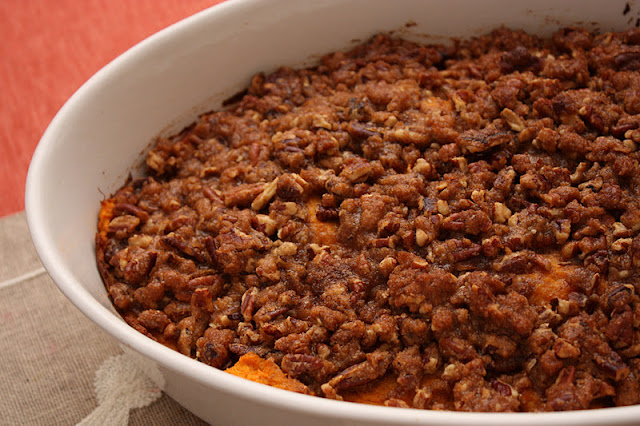 A lot of people think that you're supposed to wait for sweet potato vines to be frozen back before harvesting, but that's folklore probably derived from the fact that you do need to let white potatoes die back. With sweet potatoes, your tubers will actually last longer if you harvest before the vines die back since the tubers can be slightly damaged by a frost killing their vines, which means they turn bad sooner in storage. You also want to have a couple of weeks of warm weather to cure your sweet potatoes and make them sweeter, which is why I usually harvest pretty early (in September) to get that curing time before I have to move the tubers inside.

Sweet potatoes are one of my favorite things, no matter how they are cooked!
I went digging and found your wife's recipe- definitely giving that a shot!

I have never been a huge sweet potato fan...most of the time I have them, they are *too* sweet and just seem strange to me. My wife made some the other day though and she made them MUCH less sweet. It really let the natural flavors come out and I am now reconsidering my feelings about them.

After all the work you did planting and maintaining your crop it's disaponiting you didn't harvest earlier. Sweet Potatoes should be harvested prior to frost or immediately after an early, unexpected frost. Did you try using the leaves as greens, thye are used that way around the world.