So, I recently caught a couple of bass just like this in cold, cold water somewhere in the Gunpowder River drainage: Definitely some similarities, but the eye color is much more brown than red.  Since I haven't caught a Red Eye Bass, or Rock Bass, in Maryland in about five years, I started to think - maybe I've caught the easternmost Red Eye on record for this state!!! Then, I let the fish go.

What makes this question somewhat difficult is that many internet pictures of "red eye bass" are really just smallmouth bass with red eyes (that was my first hint).  What makes it even more complicated is that there are two very different species of "Red Eye Bass," Micropterus coosae and Amboplites rupestris.

Again, it's been five years since I've caught one.  And I'm not an ichthyologist. So bear with me.  M. coosae is common only in a few river systems in the foothills of the Appalachian mountains.  Which doesn't mean it's never been stocked elsewhere...but...the Maryland piedmont (and not draining to the Potomac) seems like a bit of a stretch.  Below is a picture of M. coosae.

You have to admit, M. coosa looks a lot like my fish.  Alas, Maryland DNR is pretty adamant that there is zero chance I had an M. coosa on my hands.  Plus, the wikipedia page on the species backs this up......and happens to be based on the authoritative text on Midatlantic fish (here it is, yes, you should buy it if you fish and live here).  Alright then, moving onward.

A. rupestris, aka the "Rock Bass" or "Redeye Rock Bass" does indeed live in Maryland - unlike M. coosae.  Here's where the DNR end starts to fall apart.  The species is not recognized as existing in the state, however, a state record fish exists (and now lives in the giant aquarium at our local Bass Pro Shop), and yours truly has actually caught "Redeye Rock Bass" in the state.  Since I've seen them myself, and since local anglers obviously stock them into farm ponds (hence the new state record, caught in the same pond as the last state record).....I'll call the matter settled.  The damn fish lives in Maryland. Native or not. And it could have been stocked into this drainage - native or not, and legal or not.  But what does the Redeye Rock Bass look like? 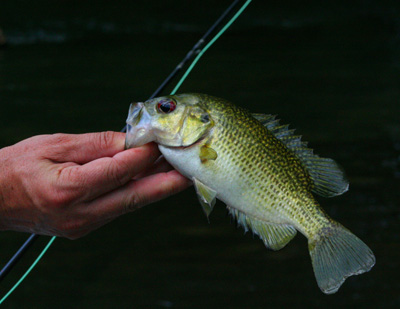 Wow.  That looks nothing like my red-eyed fish....and there's a reason for that. A ruprestis is basically a mutant white perch. Not a bass at all (which are really mutant sunfish).  The dorsal fin is different.  The mouth is different.  The scale size is different.  Everything.  So....what we're left with is a red-eyed smallmouth bass.

So, smallmouth bass it is.  Oh well.  I guess the thing that got me down this road is that many of our smallmouth in the Baltimore area don't look this way at all - they look more like this:

In the end, I learned a good lesson in the variability of fish coloration.  Not nearly as exciting as being able to claim that I found a mountain species in a piedmont stream.   And by the way, if anyone wants to give a shot at telling me what species or hybrid this fish I caught this summer was, by all means, fire away, smarties!

Ah, sorry to hear its not as rare as thought. I had the same issue with a drum that I caught out of the Ohio River. I had no idea what it was but I had a lot of fun figuring it out.

Great blog! I suspected the fish was a smallie from the first picture, but am glad you got it sorted out. That last picture looks almost like a walleye hybrid at first glance. I have caught a few spot-LMB hybrids, but have never landed anything that looked quite like that. Judging by the background - some of the odd look may come from the water chemistry, clarity, etc.

all these big fancy names for fish are giving me a headache.It's a smallmouth!

Really interesting post and thanks for doing the work to figure it out. Still some impressive fish there no matter what we call them.

Thanks for the comments - it's always worth figuring it out!

Drew - the water was super black - probably tannic/acidic. That could have had an impact on the color.

Still have no idea!