I recently saw a post over at Troutrageous! where Mike highlighted his first commenter (and corporate sponsor???) Fish Creek Spinners, from back in December 2007.  Well, since River Mud also dates back to 2007, I thought for sure that I'd have a record of feedback from readers or other bloggers that pre-dated Mike's first comment.

Turns out, well, sort of.

I have a pretty good (though slim) record of blog comments throughout the first several months of River Mud's existence, but interestingly, none of those blogs are updated anymore.  None of them.

The author? None other than that portrait of stability known as Maine's Rabid Outdoorsman. 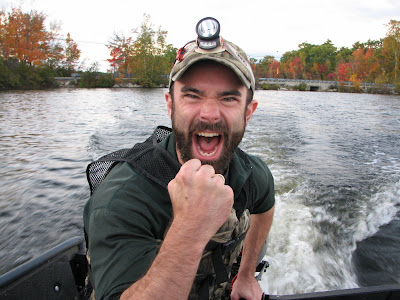 The Rabid Outdoorsman said...
Nice! If you haven't already seen it check out my friends and I hunting Eiders last season.

Yeah, so the first still-standing comment on this blog was totally self-promotional.  But that's how Yankees roll, or so I'm told.  Who was your first commentor? - and if they're a blogger, do they still blog?
at December 16, 2011

Have fun. I have a 1962 Model 58 with a full choke barrel. It's an awesome gun....for fixing a dislocated shoulder! It is beautiful though. Look forward to seeing pix of your restored 1100.

Oh man, I sold that gun to my brother (Whitey, not Tug Butt) like three years ago. He is a master with it - it was a challenging gun for me.

A buddy of mine was the first..on the 1100 front: little bit of duct tape under the forend (to let the action cycle without catching)turned my '79 1100 into my first great heater.

A fishing buddy of mine who also started a blog and fished with me. This was way back before I realized that blogging was nothing more than a labor of love.

HAHAHHA! Self Promotion! My Brother was my first commenter. Too Funny.

Tugg Butt,yeah ok big brother I hear you.Bring your rain suit when you come down in a few weeks,we are going rain or shine now!

Thanks for the hat tip, and it's really fun looking back into the past, especially if you've been around for a while like us oldheads. In blogger years we've got to be close to 70 or 80.

Ha. I must have picked you up in 2008. I've noticed how many blogs bite the dust too, but going to go check...I can think of a bunch of commenters beside you still going strong...Wolf Waters...Brenden Terrill, Mizlan, Michael Hastings, Jeff Douglas, Gene Norland...couple more.

All these guys are pretty down to earth fishing nuts without much marketing attached to their blogs.

Maybe it's the more ambitious commerically oriented types that bite the dust when they don't make any money?

IMHO, making a legitimate blog income demands a LOT of heavy-handed business strategy, financial planning, and actually ACTING on your business strategy on a weekly basis. In the course of all that, the fabric of your actual blog may be destroyed. Yay, pop-ups!

Another group who tend to give up are those who work really hard to be good writers, but are easily derailed by distraction, real life, etc.

TR Mike - hey, the post was your concept, to you goes the credit!

I like to think of myself as in the senile-70-year-old-fishing-naked-in-a-city-park stage of blogging. Ha ha.