Cloak and Dagger Trout on the Patuxent 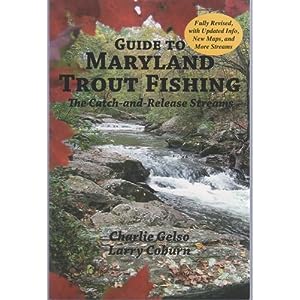 Sometimes, I imagine what my life would be like if I took my own advice with any regularity.  One pertinent example: the places where I catch fish consistently are not in any guide book or fishing map.  I advise folks of the same - after all, I share a 60-mile "easy to fish" radius with about 2.5 million people, of which about 250,000 have Maryland fishing licenses in any given year.  So there's a bit of fishing pressure.  But recently I picked up a copy of "Maryland Trout Fishing: The Catch and Release Waters," a well written book full of all kinds of useful information from typical flow levels to most effective lures (the book's focus is on fly fishing).


I read up on several areas, and took note of the Patuxent (I'll leave the branch ambiguous).  I have fished the sections of the Patuxent below the fall line for years, mainly for bass, perch, and shad, but I have never fished the river or its tributaries for trout (up into the piedmont).   I guess I thought it would be relatively untraveled and unfished (or hardly fished) in late February.  The area is also designated "delayed harvest" which normally keeps away both the catch and release crowd (too many stocked / too few wild fish) and the bait fishermen, at least until the harvest period opens in June.

And so I went.  And as you can see, so did a bunch of other people.  I was flabbergasted at how worn the trail was in late February - more on that in a bit.  Still, it was amazing to be in such a remote spot, just 10 miles north of the DC Beltway and 10 miles south of the Baltimore Beltway.  One of the tributaries (the Little Patuxent) runs right through NSA headquarters at Fort Meade...so yeah... everybody already knows this spot. Don't know why I'd assumed any different.

I made my way down to a washed out stone bridge and got to work.  With a mix of snow and rain in the air, conditions definitely weren't ideal.  I'd seen grubs, woolly worms, and bees moving earlier in the week, so I threw woolly bugger and bee patterns rigged up to inline spinners/spoons, and had several bites by suckers.  None swallowed the hook, which was fine by me.

The river is a lot different than the tributaries of the Gunpowder I started fishing last year for trout, and certainly different from the nearby Patapsco, where I caught my last February trout in 2005.  The Patuxent's banks are sandy and eroding, and the river is wide and surprisingly shallow, even in February.  There's a fair amount of woody debris, but less than I expected. The layout of pools, runs, and riffles is a bit unique too.  In the spring, I'd expect to see a good spread of trout across nice wide cobble beds about 3' deep.  The river's greatest problem is that local groundwaters recede in summer, guaranteeing that most trout will die from warm water and low oxygen levels. Finally, I drifted a red and chartreuse hackle on a gold spoon (don't hate!) past a dark pool against a boulder.  Two brown trout around 10-12" long darted downstream after it, then reconsidered the merits of their competition, and then darted back into darkness.  4,752 subsequent casts above, through, across, and below the pool did not generate any fish movement.  Dammit. Around that time I ran into another angler, fishing a pink trout magnet worm (don't hate!).  He reported a catch of approximately 9,000 suckers and did not see a trout.  The best/worst news of the day immediately followed.

"Ya know, they stocked 500 browns downstream the other day?"  Oh, lovely.  Suddenly, the two identical, eager fish, the worn-down trail, the bootprints all over the sandbars, and the reality of the site's geography all became clear.  I calmly answered, "there's two in this pool, but obviously most haven't moved up here yet - this water's almost empty of 'em."

I don't know if I was more upset that I got blanked on a stream that had just been stocked a mile or three below, or that I was wasting my time fishing a reach of stream that everybody knows about, everybody fishes, and where DNR dumps a thousand or more trout every year, who almost all die by July 4th.

There are probably some lessons here, but I don't really care.  I'm unhappy that I'm still fishless for 2012.  For today, I'm happy that I got to go out.  I tried a new river.   And while I'll probably never come back to this exact spot, I'll have an idea of what to expect when I sneak into an unpublished and unnoticed Patuxent tributary several weeks from now, looking for leftovers... And for the World's Greatest and Most Pure Trout Fisherman who lamented my lure choice in the comments below, suggesting that, for use of this lure, I may as well seine net wild trout, here's the unsportsmanlike, end-of-the-trout-fishing-lure-as-we-know-it lure you were so concerned about: Love your posts RM. I still have a lot of catching up on some older ones. I'm adding your blog to my list of favorites. Great work. We'll have to fish together some day.

I love looking for and trying out new spots. However, I too would have been upset to find that everybody and their brother had already been there. You can't ever find a new honey-hole if you don't search for them though.

I don't think I could go try new places without catching a 2012 fish though haha. You've gotta get that out of your system first.

Fat Boy - tell me where and we'll make it happen! My work no longer takes me out to western MD (that's where you are, right?) but that doesn't mean I can't come out there and fish. Drop me a line anytime.

Alex - yeah....I have an expensive user permit for a new largemouth spot that opens on March 1. They only sell 50 permits per year. Guess where I'm going after work on thursday? I'm done with the "not catching fish" thing.

Hey RM, Just got the skunk off me with some nice rainbows. I know their farm raised fish, but here on the eastern shore that's all we get. I also heard they released some golden trout, but haven't caught any of those yet. Just wondering if they are a natural wild fish, or some type of hybred. (Thought you might know)

Ahh you must be fishing the Tuckahoe! I've fished there!

Hint on the goldens, their real name is "Golden Rainbow Trout." It's just color. I don't think any other of the genetics are significantly different from regular rainbows.

RM, I work the upper end of many of your river systems, e.g., the rivertops of the Susquehanna feeding the Chesapeake Bay environs. I like your willingness to explore the new. Sometimes you win and sometimes you lose on these expeditions, but all attempts build your karma. Soon the Skunk will be off.

"Finally, I drifted a red and chartreuse hackle on a gold spoon ...."

Maybe you can take a buddy with you and just cast a large net across both banks next time, if you are so desperate to catch fish... Dynamite is said to work too, or maybe you could try some nymphs like they do in the Czech Republic....

Ha! Wait. That's not a joke, written by a night school GED dropout? Well then, allow me to retort.

Thanks for the visit. Perhaps you should stop worrying about how I fish and simply concentrate on blogging about "ranking the greatest Star Wars figures." If that's not a Godly pursuit, I don't know what is.

Are you sure you are a Quaker, and not, in fact, a holdover from the Puritans?

Thou shalt burneth until death, for thou hast used a French inline spinner for the most satanic purpose of catching a fish! YET, a fish THOU HAST NOT CAUGHT. A worse abomination has not been known to God or to Man! MAY GOD HAVE MERCY ON THY SOUL!

Hey Walt - thanks for the encouragement. It won't be much longer. We have two warm days coming up this week - I'll be on it.