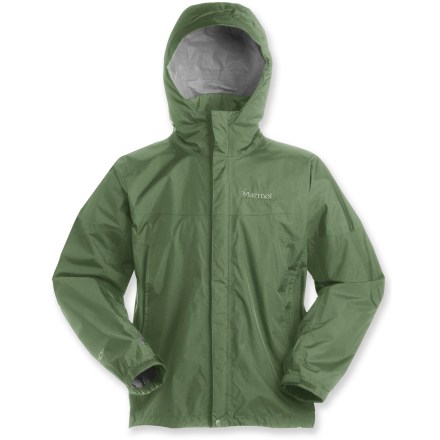 It was bound to happen.  On a ridiculously wet and warm day last October, I was out planting grasses in a newly restored wetland with a bunch of volunteers.  That rain would not quit.

It was also about 75 degrees outside, so despite the deluge, I had to keep unzipping my Patagonia shell to let some of the steam out.  Ahhhh.  That shell.  It traveled with me for 8 years across the Carribean and Central America.  To about two dozen states, up mountains, and through swamps.   It was solidly waterproof, totally packable, and had pit zips.  Winner!

But suddenly, the zipper disintegrated.  Totally fell apart.   Fabric, zipper line, and the zipper itself.  And I got wet.  Really wet.  Ultralight rainshells are one of the gear items that I demand the most out of, so I knew that a suitable replacement was going to cost me between $110 - $220 for sure.  And suddenly, it was time to act.  I looked at several choices for a replacement, and ultimately had to go to an expert, my former DU intern Nate.

Now, you need to understand a few things about Nate.  He loves the outdoors more than I do (a high bar to reach), is crazier than I am, and is just as dumb.  Yeah I think that sums it up. Oh yeah, he also has a keen understanding for what gear works and doesn't work in the outdoors, especially in poor field conditions.  He is also from Pennsylvania, so right off the bat you know there is something fundamentally wrong with him.

I gave him a list of rain shells I was considering, and he had a lot to say about all of them, but the overall ruling was "Bro, you got to get the PreCip." So, lacking a sponsorship from Marmot, I saved my duckets and some gift cards and was able to purchase a new Marmot PreCip for about $129, only two months or so after the failure of my Patagonia shell.  So how'd it do? I've hunted, fished, paddled, hiked, and worked in the PreCip - in some of the most intense rains you could put a coat through.  There are a few things I'd change about the jacket, but it's pretty much bombproof.

In sleet and snow, the jacket holds up perfectly.  While it's uninsulated, you actually get a little bump of insulation from the heavy dousing of proprietary PreCip waterproofing that Marmot gives the jacket.  And the pit zips make it possible to actually keep moving in the snow, without baking in the jacket. With normal wicking clothing underneath, I'd say the PreCip is comfortable down to about 30 degrees for brief trips outside and down to about 42 degrees for a long walk, hike, or site visit.

Surprisingly, it's very breathable.  And before going any further, I have to say this: if you want a high quality rain jacket that you won't roast or freeze in, you are going to pay over $100 (MSRP on the PreCip is about $129). If you want it to last, and you plan to actually use it with regularity, it is going to cost money.  Sorry.

I am a moderately sweaty dude.  Not extremely, but moderately. That being the case, I require my warm weather gear to be well ventilated.  Again, you're probably not going to find a well-ventilated shell for under $100, and certainly not one with well-constructed pit zips.  In fact, it seems like many outdoor wear companies are moving away from pit zips because it's hard to design and stitch them well.  I was really impressed by the PreCipon this count - the pit zips are 15 inches long!  I leave those babies open when I'm paddling in the rain, working outside in the rain, or doing anything that would have been steaming in my own heat if I were wearing a cheaper jacket.    Unlike some competitors (Kelty for one), the pit zips are constructed really fabulously on the PreCip.  I have no doubt that they'll hang in there for many years of sweaty abuse. One minor issue that I've found with the PreCip is that while it's amazingly lightweight, the waterproof construction lends it to being a tiny bit stiff (not much), which makes it a bit less "packable" than my old Patagonia.  Make no mistake, you can easily cram it into any crevice in your pack.  But it might not fit into one of those 3" x 8" tiny compression sacks for rain shells.

A big test for me was determining whether the PreCip would hold up in "real" outdoors conditions here in the Mid-Atlantic and Southeastern United States - I'm talking eight foot tall blackberry briars, ten foot tall reeds in the marsh, and 200 year old barbed wire fences that were seemingly strewn up by the gods through what is now mature, dark forest.  While the PreCip is not a briarproof coat, the material has done an amazing job of shedding potential tears.  I'm constantly amazed that it hasn't torn.  And that's my kind of coat.

With all of this great stuff, you'd think that the PreCip has no flaws.  Well, aside from the fact that it's just a rain shell and it simply can't handle 110 degree rainy temperatures or 30 degree blowing snow (a limitation of the gear type, not this specific make or model), I've found just one thing I don't like about it - the generous pockets.

Now, the pockets are well constructed.  Zippered and taped, they are going to keep your gear dry.  Or rather, they would, except that the pockets are so generously sized, that when loaded down with contents, the webbed pocket liner hangs down below the bottom of the PreCip, which is no bueno in a heavy rain.  Basically, the pocket liner is only attached to the PreCip at the zipper, and is otherwise just loose and dangling.  Of course, the adjustment is simple - I don't put anything heavy in the pocket.  Most annoyingly, though, that excludes knives and truck keys.  But honestly, in several months of hard wear, that's the only flaw I've found in the coat. 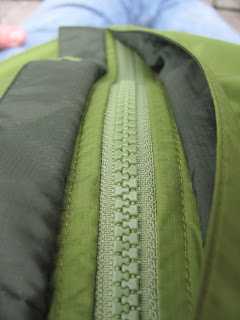 In preparing for this review, I've also talked to many other folks who have owned the PreCip.  Everyone loves it and wouldn't trade it.  Three different people asked to inspect my hood, because apparently the older models (pre-2011) would pool water up around the neck, where the ultra lightweight hood is stored. Then, apparently, when they went to put the hood on, they'd get 5 oz of cold rain water dumped down their back.  All three exclaimed, "Great, they fixed it!" Which of course, was a relief to me.

The bottom line is that if you have $300 to spend on a rain shell, you have lots of options, and almost all of them are outstanding.  But if you have $100 to spend on a rainshell, you have a lot of mediocre options available that might get you wet, cold, or steaming in your own sweat after just an hour outside in the rain.  The Marmot PreCip is definitely an exception to that rule - it's bombproof, and dollar per dollar, the nicest rainshell, windshell, or even parka I've ever owned. 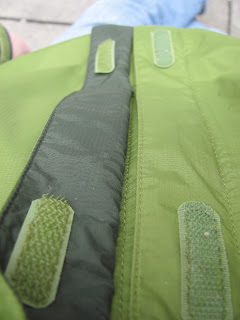 Great review especially since that's one of the items on my list. The pockets shouldn't be an issue for me as I don't put much in them. I will be keeping my eyes open for some good sales. Thanks and keep up the good work.

As, predictably, in California, if it's a wet, cool, muddy mess out, we're probably out trying to catch salamanders. Being dry rocks. Thanks for the bomber review!

Thanks Mike & BB; if you pick one of these up I hope you have the same success I have with it!