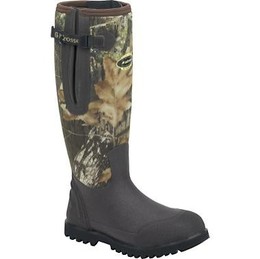 Ploosh. Suck.  Ploosh. Suck. Ploosh.  A frozen needle hits the back of my ankle. Then, the flood of 35 degree water.  Dammit.  The repair didn't hold.  I needed new boots.  That pair - LaCrosse AgIons purchased from a Hamburg, PA gear shop while on a work trip, were the best mud boots I'd ever owned.  They saw hundreds of days of work, hunting, and fishing over their four years of service.  They worked.

And so I thought I'd give LaCrosse another try - despite the apparently unfixable leak in my AgIons.  In the time I'd owned them, there was a significant shift in the "mud boot industry" (yes, I'm laughing at that statement, too) away from big, clunky rubber/vinyl boots like the AgIon (where were pretty warm and sort of well ventilated), and toward fitted rubber and neoprene boots like the Muck Boot.   The problem with Muck Boots is that they often run over $150/pair, and in a temperate climate like Maryland or Virginia, you will need a summer pair and a winter pair.  Cha ching.  And if you've owned a pair of Mucks, you know that they are not easy to get on or off - especially when cold and wet.  So, that's a problem.  But they are warm and very easy on the feet.  And that combination is priceless.  Well, maybe not "$150 priceless."  So...yeah.   Back to LaCrosse.

In my rather hasty shopping for a new pair (can't be a wetland biologist or a goose hunter without knee boots!),  I saw that LaCrosse was manufacturing several of their own types of fitted knee boots.  Several were very intensely designed - fitted neoprene scent-proof boots, etc, and didn't seem like they fit the bill or would resolve any of the Muck Boot problems I know about.  However, one model, the Alpha Lite, looked like it might work out well, and I was able to pick a pair on sale for $89 (about $30 below retail).  I had them out on a hunt that same afternoon.  I'm sure the deer couldn't smell the factory-fresh rubber.  Oh well.

Appearance:  This is a solid looking boot.  It has some camo, which is nice, but more importantly, the entire boot has a dull finish.  I do not need shiny boots for work, and I can't tolerate them for hunting.  The sole is solid, and solidly attached.  The lower boot is fitted, and the upper boot is slightly flared.  A side zipper (quiet in the field) makes access easy. Construction:  This is a well made boot.  Because the upper portion is primarily neoprene, and the lower is hard rubber, it is basically put together like a wetsuit: a little stitching and a lot of glue.  Because of the nature of these two materials, and because their is a side zipper , I don't think these boots could take the same level of neglect (i.e. weeks in the truck bed, accidentally getting run through a car wash) that my AgIons did.  But out of the box and with very little care (i.e. put them in the truck cab), they should last for years.


Any time "waterproof" and "zipper" are combined in a product, I get very concerned - because wetsuits have a very similar zipper to the Alpha Lite (minus the rubber barrier behind the Alpha Lite's ), and let's face it, a wetsuit's job is to limit flushing in and out of the suit, not to keep you dry.   But I have to tell you, these boots are dry.  Very dry.  The zipper is pretty hardy, like the zipper for a wetsuit or a very high-end tent or sleeping bag.  It ain't breaking. The rubber liner behind it (that keeps the boot dry) seems to be strong enough - over time, we'll see.  The zipper also gets around one of Muck Boots' biggest shortcomings: easy entry and exit from the boot. It sure  is nice to just slide into a boot on a cold morning and zip.

The sole is a modified lug and is more than adequate for most situations like cornfields and wet woods.  It also grips well on slopes.  However, I've worn them on wetland construction sites and found that where fine clays and silts are exposed, I definitely seem to carry a lot of mud on the bottom of the boot.

The sole is not dissimilar from Danner upland boots I've owned in the past (which makes some sense, since LaCrosse and Danner are now the same company).  A more aggressive lug on this boot would have been welcomed, but generally the sole is adequate, which can't be said for most rubber boots that retail for under $100.


Comfort / Warmth.   This was the biggest unknown when purchasing these boots online.  I was worried that the boots would be infernally hot, and I also saw some comments on the gear outlet's website that complained that the Alpha Lite was too tight around the ankle.  I have a bony ankle that's not fat, but it's not small, either.  On that count, I was relieved to find that the ankle fit was snug but not tight (especially given the side zip).   This was a huge change from cheap mud boots, and even the "old school" AgIons I'd owned up to that point.  It was clear that I could stand longer, hike farther, and even run a short distance in the Alpha Lites.  I shouldn't have to tell you how important those things can be.  But if you prefer to wear really thick socks, or you like the extra room, this boot (really, this entire type of boot) is probably not for you. 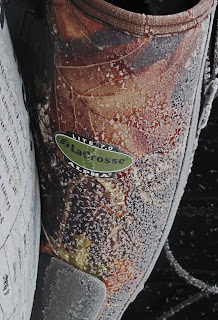 On the thermal properties of the boot, I wish I could say "I was pleasantly surprised," but honestly, I had moderate expectations, and just plain wasn't surprised one way or the other.  The boots, at 600g thinsulate in the lower and 3.5mm neoprene in the upper, are toasty and warm in winter temperatures at least down into the 25 degree range - with a single pair of wool or Smartwool socks. How awesome is that?  The boots are very comfortable, even doing active work or hiking, up into the 70 degree mark.  Beyond 65-70 degrees and into the 70s and 80s, I was somehow surprised that the neoprene upper (if dry) starts to get really hot, which then also prevents heat from leaving the hard rubber lower.  Again, this is true of neoprene wetsuits - ask anyone who has surfed or paddled cold water on a hot day - you start finding excuses to get the suit wet and cool it down!

On the foot sizing, I was also concerned when ordering - my feet are between a normal and wide size, but LaCrosse boots are usually generous in width, and the Alpha Lite is no exception.  Very comfortable, tons of arch support, and tons of ankle support.  Those are the benefits of a tighter boot.  The length/shoe sizing holds true to normal sizing, as well. 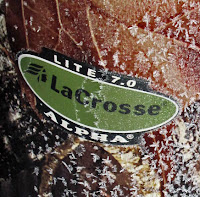 Overall / Recommendation.  LaCrosse has been making boots in the United States for over 100 years.  Their products, while less flashy than some, continue to impress real users of outdoor gear, and I'm no exception to that.  When I bought these boots, I thought there was a decent chance I'd have to return them after wearing them a few times. Luckily, I've found that they work just great for me, and if your activities and climate are anything like mine, you'll enjoy wearing these boots - and you might even forgive that they won't be with you in June, July, and August.  If you're strictly a summer hiker or birder, you probably want to look elsewhere for a mud boot, but for those of you who are outdoors all year-round, the LaCrosse Alpha Lite is a great piece of gear to have in your arsenal of boots and waders.

I am in the market for a new pair of knee-boots, and was trending in the direction of Muck (like seemingly all of my hunting buddies). Your impression that the zipper on these LaCrosse boots is durable has brought LaCrosse back to my attention, the ease of entry on these boots is a big selling point, and knowing that the zipper isn't necessarily a weakness is great to know. Nice, thorough, review!

This is also a great boots to have. I also have a pair and I'm satisfied about the level of comfort whenever I wear it.