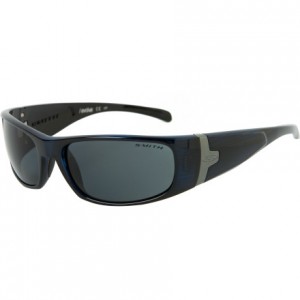 As I mentioned last year when I reviewed the Smith Proofs on this blog, I'd wanted to try out Smiths sunglasses for several years, but I was extremely afraid of getting burned by the $110-140 price tag of their polarized models - a price tag that places them firmly alongside similar Ray-Ban Predators (which I wore for years) and Costa Del Mars (which I've never owned).

I've had the Shelters for a year now - they've been great sunglasses for me (and I did get a deal on them).  Early in 2012, I had the chance to grab a pair of Smith Shelters for an even better deal, and thought I'd try gray lenses instead of my standard brown with tortoise shell frames.  If there's one thing that brown lenses don't give you, it's great protection in high sunlight conditions.

The Proofs I purchased were made using Smith's "Evolve" recycling process, and they were literally the lightest sunglasses I'd ever owned.....until buying the "Evolve" Shelters.   The frames of these sunglasses are light and flexible - a great thing since my two year old loves to grab and bend them (the death of my Ray-Ban Predators in 2010).

One of the first things you'll notice about these shades, though, is the overall size - these are big glasses.  This is a model suitable, in my opinion, only for guys with medium to large heads (like me) and perhaps for guys and ladies with smaller heads who want to make a fashion statement featuring gigantic sunglasses(which is fine).  The style is obviously a wrap, but the arms are huge - very huge. Reminiscent of some designs I remember from about 10 years ago, surf brands like Dragon and others.  I've lost almost 25 pounds since buying this (if only those two facts were related...) and now, the Shelters almost seem too large.  They are big. In fact, the Smith website even says they are "optimized for larger faces."  Well played, Smith.  Well played.

If you're using the Shelters outside in high light (as I recommend - it's a pretty dark lens), the huge arms actually pay a nice dividend by cutting down peripheral glare.  They actually remind me of trap shooting glasses in that way.  Although if you want the Shelters for trap shooting, may I recommend the yellow, pink or brown lenses!.

The lenses are solid, scratch resistant, and well polarized.   Again, the gray lenses are quite dark, and I found that fishing, hiking, or driving with them on in dawn or dusk  glare conditions was definitely not a good call on my part.  Wearing them in higher light, I could easily locate fish under a glare, and see the text on my mp3 player, but I could not read the display of my Android smart phone.  The polarized gray lenses do poorly in low light conditions.