How to Waterproof Your Boots with a Heat Gun File under "awesome activities!"  Well, not really.  When I first bought my Danner Mountain Light II's in 2000 and my Danner Upland Boots in 2002 (my late grandmother gave me the money), I was really good about keeping them moisturized and waterproofed.  And, with both sets of boots costing over $300 per pair, why wouldn't I?  However, as time went along, I got lazier and lazier with them, and I subjected them to more and more abuse.  My Mountain Lights, in particular, got carted all over the western Hemisphere for work and play - Mexico, Costa Rica, Barbados, Canada, Arizona, Oregon, Rhode Island...the list goes on....

Somehow, despite what you see in this picture, I still have both pairs of boots, and both still are waterproof.  I still wear them both for work, but I do suspect I'll need a new pair in the next year for hiking (Dear Danner Boot Company......).

But for now, they need to be kept intact, especially my Mountain Lights.  It was clear from the texture of the leather - which was starting to crack - that a simple rub from my favorite sealer, Sno-Seal, would not cure what was ailing the boots.   But in a few not-at-all-sketchy forums across the  internet, such as AK47.net and Thumpertalk.com, folks have spoken of opening up leather boot pores with a heat gun and hot wax.  I thought about it over the last year and finally decided to give it a try.  Here's how it went, and how you can try it to (warning: heat guns are dangerous, do not ever use them, that is all).

First, you need a heat gun.

At some point, you'll have all of your supplies together to do the job.  At least 24 hours beforehand, scrub the hell out of your boots.  Get them wet.  Get all the dirt and grime out of every pore and crevice that you can.  THEN LET THEM DRY. I shouldn't have to say that.  Also, I highly recommend getting new, high quality laces for your boots.  Danner laces are great, but you can also do customized length laces by Sierra Boot Lace Company, which are way less attractive and less stretchy than the Danner laces, but are at least slightly more durable than the Danners.  They are guaranteed to last longer than your boots...for what that's worth. Alright, let's get nasty.  Apply wax generously to your moisture-starved boot.  Remember: it's going to drip somewhere when you start heating it up.  Keep in mind what's downhill from your boot in your hand (i.e. hopefully not your living room carpet).  Push the ball/plug of wax aggressively into the boot - you don't want the whole thing to move like a glacier when under heat.  Turn the heat gun on LOW.  The wax will start to melt, and then will quickly move downhill.  Trust me. If you're like me, you'll be shocked at exactly how much melted wax your boots will take - in my case, at least four times as much as a conventional boot waxing.  Keep heating, and rub with a rag at the same time to help give yourself pretty universal cover.  Work hard to get that toe box resealed - many splits from the sole occur here because the leather or stitchings can dry rot. Move onto the rest of the boot.  Again, in my case, the toe box was the most moisture-depleted area on the boots.   The other areas were still in decent shape.  I gave them a hard rub of Sno-Seal and started to work the heat gun around them, wiping up any extra sealant from the heel.  Remember that whenever you heat a compound (like a commercial wax), it will physically dissociate, meaning that part of the wax will dry into the boot, some will coalesce on the surface, and some may even evaporate.  So wipe up any residue. Give it a rest.  Make sure the boots have adequate moisture, and let them sit for at least three days in a cool, dry place.  The boot will actually sweat out a little moisture, which could be water, old sealant residue, new sealant residue, etc, so you will want to wipe them up again. Picture to the left is immediately after waterproofing.  Following picture is from five days after waterproofing. 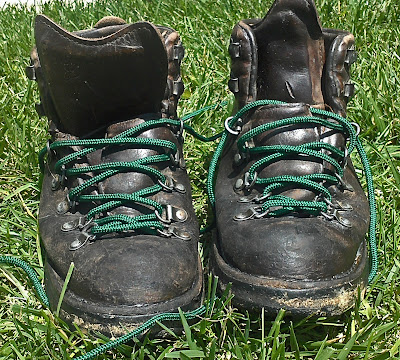 You can see the difference in the boots from having sat still, already waterproofed, and "figuring themselves out" from a hydrostatic standpoint.  (Keep in mind that these particular boots have notched over a thousand miles in a half-dozen countries).  And there you have it! Waterproofing your boots with a heat gun!

Last picture should be entitled “Ready for Church”. I bought some cheap tools that I am terrified of, especially the Harbor Freight stuff. Did you get new laces?

I have a pair of Vasque Superhikers that I love and can't part with but are in need of repair. Gonna give this a try.

Rev - how true! I love it. I am also afraid of Harbor Freight tools - especially anything that heats up or "shoots" anything via air or spring pressure. I got new laces - Danners. My last laces in those boots were Sierras - they did three good years of almost daily duty and one of the rubber tips fell off.

Gary - those Vasques are great boots. I'd been reading about this technique for over a year and I recommend it - curious to hear if you find a better way to do it (hint: that is very likely)!