Not a lot of people appreciate millet.  Bird hunters.  Bird watchers.  Wetland biologists.  A few ethnographers who are into "primitive grains."  That's about it.  To most other folks, it's just a weed.  They are wrong.  Millets are a widely sorted group of large grass species that share more in a common form than they do in actual genetics - referred to as convergent evolution.   Some common traits include fire resistance, flood resistance, long-term seed viability, high palatability (sp?) of seed, high production of seed, and so on.


Doves (and dove hunters) seem to favor Proso Millet, domesticated in China over 7,000 years ago.


And these days, everybody is talking about a new hybrid called Chiwapa Millet, sold exclusively by
Tony Vandemore's Habitat Flats company. Ducks are big fans too....305 days of the year. 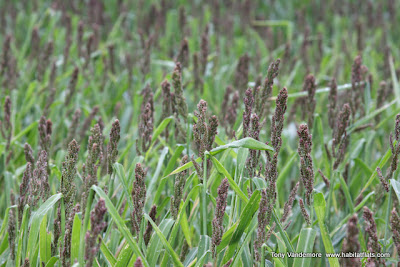 Every year, I grow a few rows of Purple Millet to dry and save for winter bird food in the back yard.
I think the doves are annoyed by the extra effort that's required to pluck the seeds from the heads. 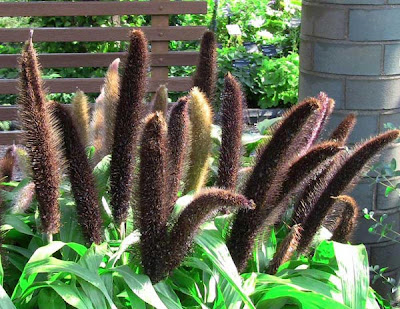 And if you thought this post could not get more boring, you were wrong.  This year, I decided to plant an heirloom plant - in fact, one of the world's longest-cultivated plants - German Foxtail Millet - as a cover crop.  Originally from China, the "German" variety, sometimes called "German Rice," was more of a food staple than rice for a few thousand years.  Now relegated to the status of "abandoned food crops," it once was the source of royalty - near divination, and I kid you not, there was a "Lord of the Millets."
I bring you German Foxtail Millet. This is just a neat plant.  Now, there are giant grasses like Egyptian Wheat, but this is just a "big grass" - about four to five feet tall with these solid six inch seed heads. One problem that folks seem to have with it is that it produced a substantial amount of stem and leaf - so much so that it's favored as a green hay for livestock - not as a source of seed for wild or domestic birds.

Like most of the millets, the german millet seems to have about a 90 day maturity calendar, and like most millets, it doesn't seem to be a fan of cold air temperatures.

Once the heads dry out a bit, they are headed to my birdseed bin - I'll let you know how they like it. The German millet is quite pretty..I'll try it next year as a screen for the pool (and additional bird food). Great post- NOT boring at all!

Chiwapa is new to me. Is it easy to grow for ducks??

Thanks Samantha! Mike...heard zero complaints about chiwapa. I do think that it requires serious site prep, only some of which is required for the similar Japanese millet.

Are there any millets native to North America?

Outstanding question! Off the top of my head, barnyard grass and Walters millet are two native millers. Both are used in wildlife habitat seed mixes, often in lieu of Japanese millet.

Outstanding question! Off the top of my head, barnyard grass and Walters millet are two native millers. Both are used in wildlife habitat seed mixes, often in lieu of Japanese millet.

Feel free to surf to my web-site - hcg injections

I want to plant foxtail millets, where can i buy the seed ?

I want to plant foxtail millets, where can i buy the seed ?

I am seeking permission to use your foxtail millet "German millet" (Setaria italica) photo for a USDA plants "Plant Guide" hosted on a USDA Plants Database http://plants.usda.gov/java/
for educational purposes.
...please contact chris.sheahan@nj.usda.gov

I am seeking permission to use your foxtail millet "German millet" (Setaria italica) photo for a USDA plants "Plant Guide" hosted on a USDA Plants Database http://plants.usda.gov/java/
for educational purposes.
...please contact chris.sheahan@nj.usda.gov