August 17th, 1997.  I had just quit my job as a wildlife technician for the US Army and had moved to Boone, North Carolina to start graduate school at Appalachian State University.  First - and last - time I'd ever lived beyond the eastern continental divide.  To make the move happen, I'd overdrafted my bank account by about $400, and then of course, my 15 year old 4WD Subaru died as I pulled into downtown Boone.  Oh well.  I couldn't afford the $175/year campus parking permit anyway.

When I settled into my $200/month concrete basement apartment in the floodplain of a mountain stream fed by highway runoff (turns out, that was a bad idea, which is a whole 'nother story), I checked into the ASU campus, only to learn that I wouldn't receive my first paycheck for another six weeks.  I don't curse much on this blog, but "F*ckin' Perfect," was about all that I could say that week.  And I said it repeatedly.  I ate a lot of corn out of the can, generic tater tots, and the cheapest hot dogs available for human consumption. I wondered a lot about why God was making things so hard on me, when so many other people (read: other grad students with financial support from their parents), had it so good.  On the flip side, the scenery was amazing and people were outgoing and friendly.  Maybe things might be okay.

Later that week, Thursday, I believe - making it August 21, I got four calls from four different friends in about a thirty minute period to tell me that our dear friend Scott had taken his own life.

I couldn't, and I didn't, make it to Scott's funeral 300 miles east of my new home, a reality that I regret, and one for which I'm not sure I've been collectively forgiven by my old friends.  I regret missing it not for Scott, but for the rest of our friends who were grieving acutely over his decision to move on from this life.   We loved him.  I've made peace with Scott's decision over the years - it was his life, after all - but I cannot abide by the wake of pain and turmoil his action caused.   And, sick though he was, he was also quite aware of the stir, the mourning, and the scarring that his action would cause.  He'd talked about his own death for years, actually.....which is why I've not used the word "surprise" anywhere in this essay.

Let's dispense with the conventional examination of "all the damage that suicide causes."  Whatever. It happened.  That wound was created in the rest of us, and it either healed or scarred in each of us.   It's long done, and rarely discussed amongst us any more.  Here's my issue with the scenario, 15 years later.  Scott, like nearly everyone on earth, had something to give.  Scott, like many suicidal people, mistakenly thought that the world owed him something - at the very least, an equal opportunity at  Happiness. Contentment. Mental quiet.  And he held that ill notion that if one's path is repeatedly beset by trials and tribulations, then living is destined to fail, and not worth the effort.

In written word, it's hard to show how strongly I disagree with that attitude.  It's clear to me that life on earth - this life - is a blessing - which doesn't mean that it's easy.  Or fair.  Or fun.  Sure, we don't have the ability to jump between dimensions, exist in a single state forever, or to manipulate time.  But we can reason.  We can adapt.  We taste. Smell. Hear.  Feel.  Differentiate between thought, emotion, bias, belief, and assumptions.  Our species appears to be at least somewhat singular in the combination of those abilities.  That combination is a blessing, and no matter what happens when we leave this world, we'll leave almost all of those abilities and perceptions behind. Forever.  We each have a unique chance here to do something worthwhile - if only in our spare time.  And then we are gone - never to return in the same way we were once here.

Scott Miller once jokingly wrote, "Oh Lord, hear me cry; I've not earned the right to die."  The older I get, the more sense that makes.  The world owes us nothing.  It's given us life.  Somewhere to grow food and get clean water.  The chance to prepare for future generations of our species in almost anyway we choose to do so.  That is truly massive biological power.  Life should be more than a chore.  It should be an obligation to those who receive it to truly make a mark, even at the smallest scale.

It's popular right now to bash the millenial generation as being coddled and lazy.  To them, I say: this is your chance.  Your only chance.  The older you get, the harder it will be to start making an impact.  This is your chance and your responsibility to leave this country and this planet in better shape than when you arrived here.  We can disagree on what "better" means.  But it means that you should feel obligated to act. To live.  To learn....and to be wrong. To "Go and Sin Boldly," as the manic depressive Martin Luther once stated.

It doesn't mean you have to do it according to your parents' plans, or according to society's expectations.  After all, parents' plans are just that, and society is a creation of human beings that simply feeds itself at the expense of so many other things.  There is something you were meant to do here.  Go find it with an open heart.   Embrace the pain, the victories, the struggles, but focus on none of those.   Just go find it.  Go do it.

I lost friends both before and after Scott to suicide, drugs, alcohol, or a combination of those, especially when combined with fast cars and trucks.  Given our collective love of big adventure, high speed, and righteous parties, I'm lucky to have not lost more - I'm thankful to have so many friends who found their way through their own darkness somehow.  And I'm lucky to have lived this long that I can bear the burden of the final choices of friends like Scott, and use that burden to inform the way I live my life.

To try to live fully, understand as much as I can, share what I've learned, and cast off that which I cannot fix.

Scott, thank you for that.  We still miss you. 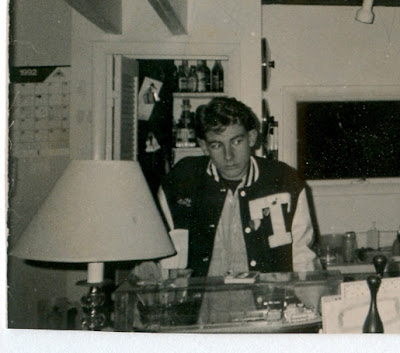 There are tears in my eyes...
"Embrace the pain, the victories, the struggles, but focus on none of those." Just keep on -- searching -- finding a reason to live. Like you, I believe there is one, it's just much harder to find sometimes than others. Thank you for the reminder and for this post.

And thank you, Scott.

That's high praise...thanks...I haven't slept well since I started writing this last week. Side effect of this line of thinking, I guess.

May the Lord erase the memories of the Subaru from your mind.

I went back to school as an adult, before I got married, because I had a scholarship. It was rough going when I relocated to start school. All travel had completely stopped because of terrorism. No one was hiring. I remember eating some canned tamales from a 99 cents store.