As I've written in a bunch of different posts, fishing with a toddler is.......different.   For those of you that have a toddler in the house (or had one at one time), you can envision what I'm talking about, even if you never tried to take the little one(s) fishing at that age.  For those of you without such first-hand knowledge, I give you the picture to the left.

Toddlers are full of energy, an inability to listen, an inability to think about consequences or pain, and the attention span of a chipmunk.  They are also cute and hilarious.  But that still doesn't sound like an ideal fishing partner, taken as a whole.  Still, the inability to seriously fish (or fish seriously) with a toddler in tow has to be considered within a more important framework - getting children used to being outdoors, around outdoors gear and equipment and situations.

After several delays related to storm, work, and other life related details, we were finally able to head to southeastern Virginia to meet my newborn nephew, already about 10 weeks old.  We knew we'd get some beach time with Hank - who, in June, had showed us that he's starting to be able to actually play on the beach instead of running up and down it for miles at a time.  I also knew we'd go fishing at some point, but I really wanted to get him on a boat.  Over a dozen attempts to get him on a boat up to this point had been thwarted by everything from illnesses to storms to boat troubles.    This time, we pulled it off.

We made a run down to my brother's place in the Chowan and Nottoway headwaters, just north of the North Carolina border.  The weather wasn't perfect, but I figured we could get out there.  When we pulled up, I let Hank inspect the boat on the trailer, and asked him if he wanted to ride.  He was pretty excited.  So, down to the boat ramp we went.  He was pretty patient as the boat got put in the water, and happily let himself be handed down to Uncle T in the boat.

Then, we were off!


T snuck the boat out of the ramp and the no-wake zone and gave Hank a chance to get used to what was going on.  In preparation for the trip, I had focused on what I now know to be the truths of toddler fishing:

1.  Be flexible - the trip could be over at any moment, for a variety of reasons
2. Keep it safe
3. Make it fun
4. Bring "meltdown preventatives"

Since I obviously knew the seating situation on the skiff, I brought Hank's camp chair along.  That turned out to be a big deal.  I also brought his fishing rod, a couple of his action figures, a roll of Oreos, some juice and lemonade,  some chocolate, his "fishing hat," and sunblock.  Prior to the trip, I took him into Eastern Mountain Sports and confirmed that his old PFD was too small for his weight, and got him fitted for a new one.  I forgot to pack his rain coat, which wouldn't have been a big deal if it wasn't raining...oops. 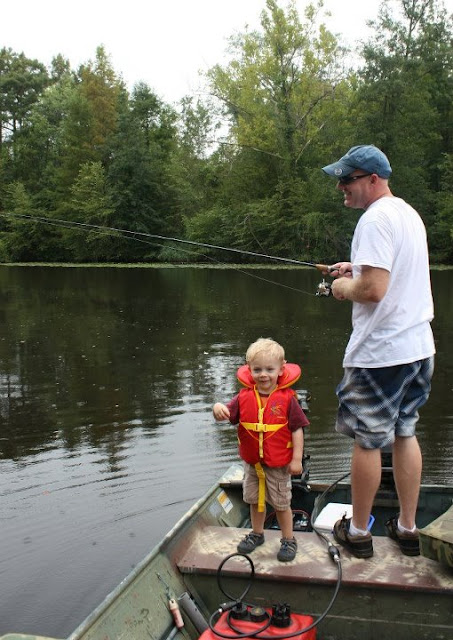 Hank was really interested in the outboard and trolling motor.  This of course led to him tripping all over the fuel line, which tends to upset boat owners.  T took it in stride though, and Hank apologized.  T and I had agreed on the "maximizing fun" aspect of the trip ahead of time, and so we fished for bluegills with live crickets.  Before too long, a little slab was in the boat. 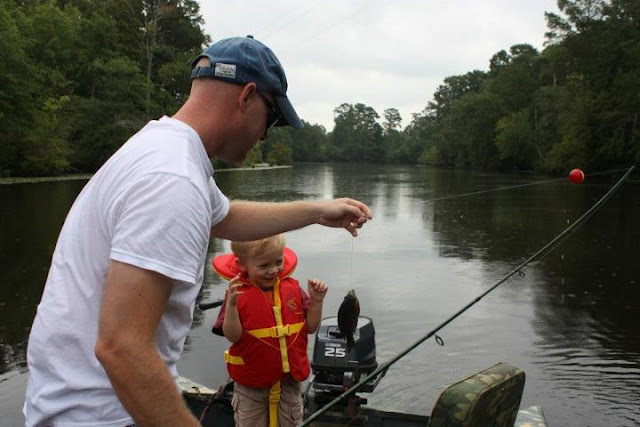 We tried to see if Hank wanted to reel in the fish; he didn't - he seemed a little shocked at the sudden intensity.......but Hank was excited to have a fish in the boat, as always, and T was great about letting him get up close and personal. 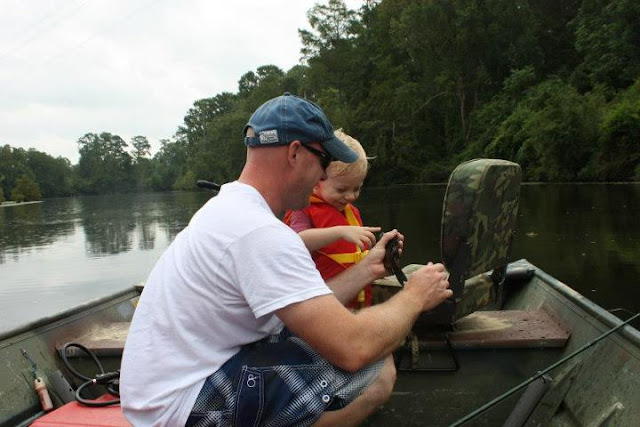 Also one of my standards with Hank, "Do you wanna pet it?" Followed by a new one for me, "Hank, look at the sharp teeth!" 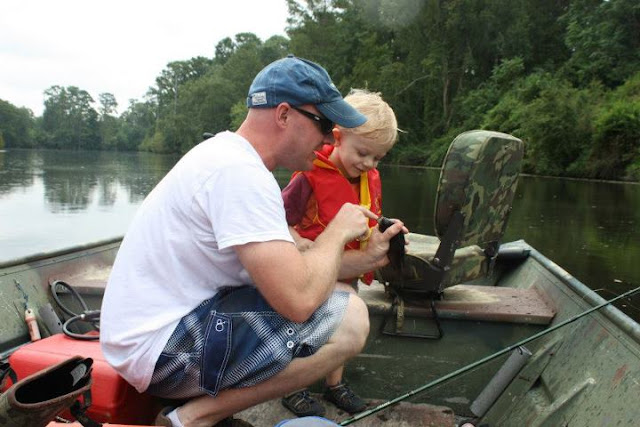 When it's my brothers and I fishing the River, we are normally off the ramp as soon as there's a touch of light in the morning.  With Hank, I knew it was important to not throw off his schedule and confuse him (i.e. why are we getting on a boat in the dark?), so we hit the river around 10:30am.  This was a bit of a problem only because it was 900,000 degrees outside, and the fishing was overall pretty horrible.  Honestly, I can't imagine it being great in a river, on a boat, while trying to watch a 2.5 year old out of the corner of your eye at all times.  Impossible to concentrate on fishing.

Both T and I had brought an extra rod (remember - we didn't plan on doing any serious fishing) because we both anticipated that once Hank saw us cast a few times, he would want to fish with a "big boy" rod, not his Spiderman rod.....and we were right.  He wanted to carry around a "real" rod.  Note: he had nowhere near the coordination required to crank the spinning reel.  Not gonna happen for awhile.

After about 45 minutes of fishing, Hank started getting a little shifty, so I gave him a few M&Ms and Uncle T brought out a "secret" meltdown preventative - a Batman Pez dispenser.  Hank was ecstatic, and it bought us another 20 minutes of fishing (in relative peace, actually).  "It's Batman with candies in his head!"


Finally, Hank declared, "I wanna go back to Uncle T's house."  We brought in the lines and started moving back.  We also engaged in activities like:

1. Letting toddler steer the trolling motor (he cranked it hard right and we drove right into the river bank)
2. Screaming contest (for real)
3. Explaining that it's OK to pee off the side of the boat, but it's not OK to pee on the floor in school. 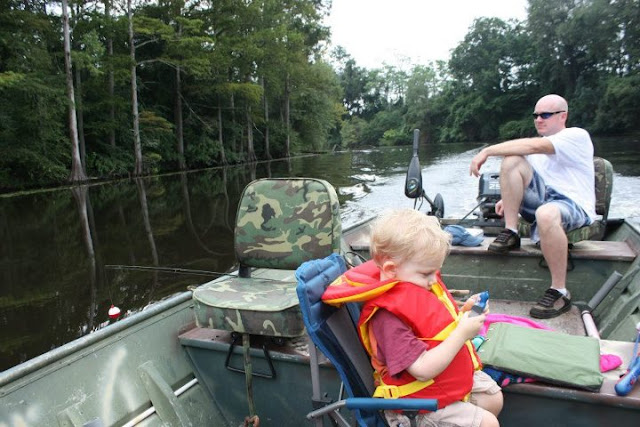 For the final run back to the ramp, I put Hank's chair sideways so he could see T and the motor.  This was a pretty effective tool and keeping Hank in his seat - important since there are half-sunken trees all over the river.  As you can see, he was mostly still enamored with the Batman Pez dispenser.

I've learned a lot about fishing with toddlers in the last year and a half.  I'm pretty satisfied with how far we've come (minus the rock throwing), and I'm excited for whatever's next.  Until then, maybe I can sneak away to fish like a grownup for a few hours one of these days....
at September 03, 2012

You guys did a great job! In a few years, you'll have a pre-trained fishing buddy. ;)

That's some powerful boat goodness! Life on the river with a kid is awesome!

Hank is the man. Plain and simple. It won't be long before he's casting an reeling like a pro!

Way to go guys! I have to admit that it's a challenge for the first 4 or 5 years , but watching my son catch his personal best Striper by himself last year was well worth it.