Me and Pneumonia. Hello, Old Friend! The doctor was stern, with one admonishment following another. Almost like when you're trying to get one ice cube out of the tray, and they all come out, and hit the floor, and the sink, and the counter, and you're like, "Holy crap, that's enough. ENOUGH."   But.  Out it came.  "You have pneumonia. You are contagious. Why did you wait to weeks to come see me? What were you thinking? Your wife and son could get it! Do you know what pneumonia can do to a little boy?!" So, the weekend's being spent in the shadows, until the mega-antibiotics render me non-contagious.  Hrmph.

But in fact, I do know what pneumonia can do to a little boy.  Meet my first friend in this world, who I spent my first weeks fully dependent upon, as I stared at it from the comfort of a warm plastic tub. 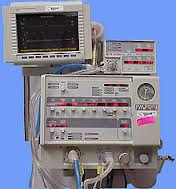 Actually, it would have more likely been the Arp Infant Respirator, featured on the last cover of Virginia Tech Magazine.  Here it is.  With its two switches and five knobs. Technology!  I was born early, and born with what's now called IRD - infant respiratory distress (JFK's infant son Patrick died of IRD).  And fun was had by all.  Mortality from IRD was 50%  in that era - now it's down to 15%).  So that was the beginning.

One of my first memories - though they are quite hazy - is from being in the hospital at age 3, with pneumonia.  I remember the horrible, tiny TV against the ceiling that was black and white, with nothing to watch, and nothing worth eating except jello.  I remember crying.  And being alone. And so, so terribly bored.

The river I grew up on was full of septic, sewage, and farm runoff.  When I was 18, we were wakeboarding on the River (because we are idiots) and I wiped out really bad and got water not just in my throat, but a tiny bit in my lungs (I could feel it sloshing around).  How weird.  Within 12 hours I had a fever, and had full-blown bronchitis a day later.  I went to the doctor, got antibiotics, and five days later, was in the emergency room.  After a bunch of extra labwork, it was confirmed that I actually had a mycoplasmic - not bacterial - infection, and to no one's surprise, the antibiotic-resistant mycoplasms had turned my lungs into another case of pneumonia.

Dorm life was tough on the immune system, but the student health department's instinctive desire to give everyone antibiotics for everything certainly kept some of my nasty bugs from causing pneumonia.  But once again at age 22, a misdiagnosis of viral bronchitis left me with a closed left lung, a blackout, and a surprised me waking up in the emergency room.  With bacterial pneumonia.

That was 16 years ago.  I've had health insurance for the last 14. And no pneumonia, despite years of playing and working outside in absolutely ridiculous conditions.  Until now.

I don't know.  I guess when you (I) don't have something like asthma, or some other condition (say, a chemical addiction) that constantly reminds you of your mortality, you forget about how thin the line really is.  I certainly forget it - and I think about my own mortality....err....let's just say...too often.    At what point do I look myself in the mirror and say, "This is what's going to kill me - but hopefully not this time."   The funny thing is, no doctor has ever told me, "You know, these things are tied together and you need to live or act a certain way."  I don't know what that means.  I guess I don't know what any of it means, except that I hate pneumonia, I hate its presence in my life, and it makes me thankful to God that I do not have a real, frequently occurring hardship or illness that never lets you turn away from it, the way I've been able to turn away and ignore pneumonia so many times, for so many years.

I am thankful.  And it's time to take some more codeine.

I have asthma so I understand lung problems. It can slow you down quickly. Asthma also lends me to get other stuff like pneumonia a lot quicker.

Get better soon so you can get back out in the outdoors!

Hope you feel better so you can get outside again.