A year and a half ago, I was contacted by an ad agency for Cooper Tires whose staff had seen River Mud and thought it would be worthwhile to send me a set of tires and a flip cam for their ad campaign. Over 100,000 people have now read my review!

The tire? Cooper's AT3 Explorer, a new tire that was designed to follow up on Cooper's Explorer series from several years ago. With a few design refinements and expansions in size options, Cooper was betting that the AT3 would allow them to more strongly compete with the BF Goodrich AT that most of us have owned at one time or another in the last 15 years.  Without having any direct sales data on-hand, the feedback from my original review and comments from the staff at my local tire and battery place indicates that Cooper has been successful to that end.

So how's the tire?  In brief, it's held up well on off-road trails, been perfect in wet on-road conditions, and the highway/fuel mileage/noise issue is comparable with other AT tires I've owned, including the BFG AT.

Let's go back to my original review.

Highway Ride.  My initial review mentioned that the AT3 produced little noise below 65mph, and a very typical noise above that speed.   As the treads have worn down, the noise at lower speeds has increased slightly, but it's a very slight and steady hum.

At high speeds, the noise has not gotten any worse with the mileage on the tire.  It should be noted, though, that once any of the tires are slightly low on air (even prior to the 10% deflation that my truck's sensor will pick up), the tire produces an awful noise between 45-55mph.  Why? I don't know.  It mostly just says, "you need air in the tire," and then, problem solved.

Rain duty.  Performance on wet roads continues to be, in my mind, a compelling reason to own knobby tires.   I've never had an offroad tire, even one that's worn down, slip in the rain the way that street tires for trucks slip every.single.time it rains.  With rear wheel drive, living in a city of 700,000 people, I can't fish-tail at green lights. It's just not acceptable.  All that being said, I've recently had the AT3's slip, just a quarter turn, while moving forward at a light change in heavy (hurricane) rains.  I'm not concerned about it at 30,000 miles, but it's something I'll be watching for as I move toward 40K and 50K miles. 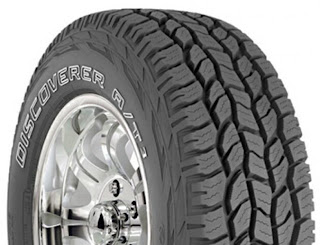 Light offroad duty.  As I wrote in my initial review,   offroad access here on the east coast is fairly well regulated.  There's very little primitive access, and for most of us (and our poor trucks), that's for the best.  All that being said, forest roads and forest roads.  What may be a dry, sandy ride down into the valley in the morning can be a two-foot-rut inducing ride back up the mountain in the afternoon - all of it on "forest roads."

I keep waiting for the offroad performance of these tires to deteriorate.  For that first muddy slip.  That first mess I can't get out of, 500 feet from a paved road.  Yet, when combined with a little common sense, I haven't found that in 30,000 miles of driving on the AT3's.  I've had two punctures in the tires, and both tires held up through the puncture (both found by me during routine inspections) and subsequent repairs.

Fuel mileage.  This has been the single aspect of the AT3's performance that has declined over time.  When I replaced my stock tires (Bridgestone Duelers) with the AT3's, my fuel mileage decreased slightly from 23mpg-h to about 21.5mpg-h.   I would have expected this from any offroad tire.  However, unlike offroad tires I have owned in the past, as my AT3's age, my mileage seems to keep decreasing, and I've estimated it recently to be around 19.75 mph-h.  My truck is a Toyota with less than 100,000 miles on it, so I honestly don't think it's the truck.

So there you have it - over a dozen people have emailed me to request a follow up on the initial review, and now you have it.  At 30,000 miles, the Cooper Discoverer AT3 is a multi-use tire that I am still pleased with, and would be pleased with if I had purchased it with my own money.   More importantly, it's one that I will consider on equal footing with Yokohama and BF Goodrich as I compare options for my next offroad tire in the next 12-18 months.
at December 27, 2012

Thank you for the update. I am heavily considering these tires and it's good to hear a detailed review from someone who has had them for a while.

Thank you for the update. I am heavily considering the AT3 for my Montero and it's good to read a review from someone who has had them for a while.

I recently replaced my dueller revo2 with cooper at3's. They handle great on wet roads as well as muddy trails. Just waiting for snow.☺☺☺