After working hard and quickly adapting to find a way to kill a goose on the farm one day, I returned the next day to hunt with TB and Steve.  Conditions were weird.  50 degrees.  Fog.  No wind.  The geese had fed throughout the previous day in the rain.  What in the world would they do today?    What we did next, well, I can't really explain why we did it, but we did.  We decided to hunt the East Pit, where I have not shot a goose since December 2009, but have returned, like a dummy, at least once a season since then.   It's my comfort zone, and it's not a good one. 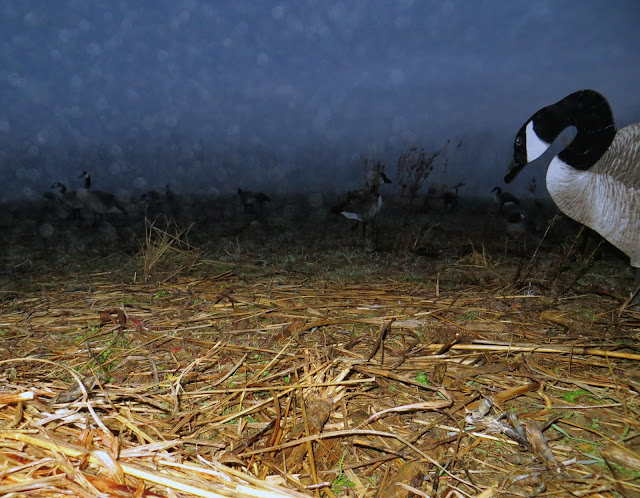 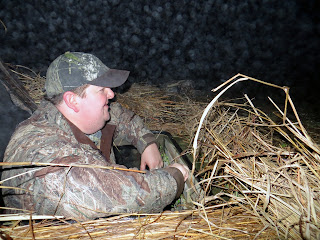 We had a few small flocks of geese take a look, but they just weren't really motivated to come into the spread.  Maybe if we had stayed longer.  Put out more decoys. Less decoys.  Called better.  The geese didn't do anything consistent on this day, and I learned almost nothing, which is rare.

Here's what I did learn - repeating the same mistakes and expecting the law of averages to right the wrongs of the past is a loser's game.  I won't hunt that pit again until I personally see live geese standing on top of it.  It's time to hunt differently. Harder. Smarter.
at January 28, 2013

We have two, very young daughters, so I'm not budgeted for travel time, or trying new things. I just hunt nearby, in familiar areas for now. I have even hunted the ugliest positions imaginable; under high power lines next to busy highways and behind factories. A few days into the season,I had to chop a hole in the ice at a corner, taking sniper shots when a bird would swim around the corner and this was perfectly sporting according to geniuses that set the dates for the seasons.

Well, that's why it's been hard for me to break the habit. You know that the "old standards" work "sometimes." If you try a new spot, it might take a dozen times to get it right. Or it could even turn out to be a total dud.

Unfortunately in the Mid-Atlantic, you can't hunt any private property without written permission, so that severe limits the urban hunting potential. I too have hunted the "forgotten urban lands" and find the spots ugly, but the hunts surprisingly rewarding. And 20 minutes from home.

I go back because it is hard for me to believe that I will walk out with nothing in hand again- but I think you know how that story ends.