Not the Winter Omen I Envisioned.... 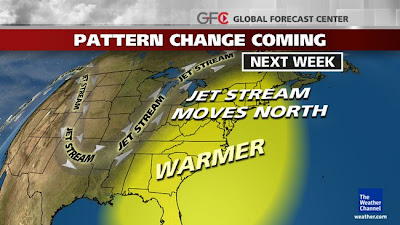 This was alongside a header reading, "Has winter already peaked?"  NOOOOOO! There's three weeks left of duck season!  Not warmer air!

On the plus side, this means that we likely won't get "frozen out," which, for you non-hunters, means that temperatures are so cold that 1) ducks may eat all day and night but still can't keep warm, and 2) the creeks and smaller (less than a quarter mile wide) creeks freeze up, eliminating most roosting areas and many feeding areas for ducks.  Which, of course, means that one morning, they wake up and fly south to southern Virginia and northern North  Carolina.

On the negative side, if temperatures don't stay near freezing, the ducks and geese simply don't have to leave the roost and feed in any regular or predictable manner.  This makes hunting them almost impossible unless one has hunting access in areas where they roost.

On the nervous side of the coin (that's right, this coin has THREE SIDES), I've only hunted a half dozen times this season (which started in September), and I'd planned to get out another half dozen times in the last three weeks of the season, which historically, can be very productive.  See above - that could now be in jeopardy.

If you gun the roost...for shame!

The old guys at our lease love to shoot the roost. And then wonder why 1,500 geese get up and leave 45 minutes before dawn every day.