Sometimes, going outdoors becomes routine.  It's a blessing, actually.  But when that happens, it's important to be able to find a day to get out and exercise our brains again.  A new place to hunt.  Or the same old place, but under very different conditions.  The constraints of my work and family obligations don't leave a lot of time for those, and sometimes I forget that a free-roaming imagination can still be mine - if I make the time. 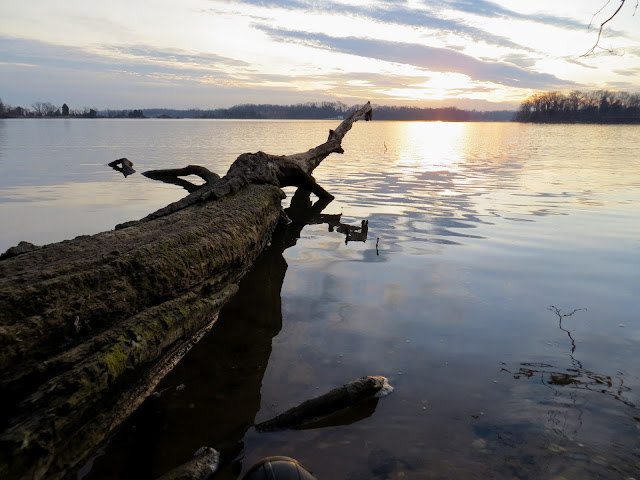 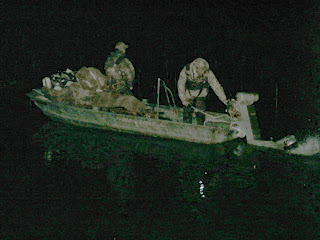 I hunted in a familiar spot on Maryland's eastern shore.  Conditions were acceptable (light rain, 40 degrees) but certainly not optimal for January hunting.  Bob and I hunted an island blind that was just barely out of the wind over about 2 dozen floating goose decoys and another dozen floating duck decoys.  Right after legal shooting time (6:50am), the ducks flew.  It's been a long time since I've seen so many ducks in one place.  And I don't know that I've ever seen so many ducks while duck hunting.  To hear the symphony was amazing - mallards, wigeon, wood ducks, loons, geese, and swans.   Just amazing to see it.  Unfortunately, they were swinging wide of us - the mild weather has made them well aware of the best feeding areas (i.e. not in front of our duck blind) and so they now move quite efficiently from spot to spot, without any real concern about our truly masterful decoy setup.  But what a beautiful sight.

I left the blind at one point, hiding behind a fallen tree on the island's northern point to see if I could pass shoot any of the birds on their way to the feeding grounds.  I could have shot at dozens, and at least three flocks came within 60 yards.  What can I say - the shot never felt right.  But what a sight - watching tundra swans circle the creek like loaded-down C-5 Galaxies, each of their graceful glides ending with a huge splash and a wave on the creek's surface.  By 9am, the ducks had fully moved off the roost, and onto a shoreline protected from the wind, and obviously loaded with clams, worms, and acorns.

Luckily, the geese began moving off of the River around 8am.  They were lazy, having fed in mild temperatures and sunny fields for the better part of the week.  But they were also anxious, well aware of the dropping barometer (luckily they didn't know a warm front - not a cold front- was on the way).   The geese weren't overly concerned about whether, or how we were hunting, which was a bit of a concern to us.  Nothing we did seem to scare them or attract them.  Calling, not calling.  Flagging, not flagging.  Standing in front of the blind, or not.  They just were not coming - this is what happens when migratory birds become patterned in a wintering area.  They know where to go.  And if you're a hunter on the east coast, where it's illegal to hunt on anyone's private property without an annually signed permission letter from the landowner, you probably don't have access to wherever the birds are going.

But we worked.  We worked out of the blind.  We worked in the blind.  We patterned the birds themselves, and found out that in several large flocks, single "attached" birds without a mate could be pulled off of the flock fairly easily - but not quite into the decoys.  We then figured out that as the flocks were headed upstream, any birds on the left of the flock that peeled off and looked at the decoy spread did not have to fly over the entire island above the trees......the left-peeling singles were low, before they turned over the far right edge of the spread, they were within gun range for just two or three seconds.  It took us a lot of talking, watching, listening, and, the funnest part, a hike up to the island's cliff, to figure out our odds.

Once we thought we had figured it out, no geese peeled off of the left of any flock for 20 minutes.  Then, in two flocks in a row, a single bird peeled left.  Each one fell to the water with a single shot, at about 45 yards, at one particular angle off of one corner of the island.  I was shooting 3.5" Hevi-Metal #3, which apparently can kill a goose at 45 yards.  Bob was shooting 3" Black Cloud #2, which I already know can kill a bird stone-dead at 45 yards, and I watched it again.   Just 10 minutes later, around 10am, the morning flight was over. 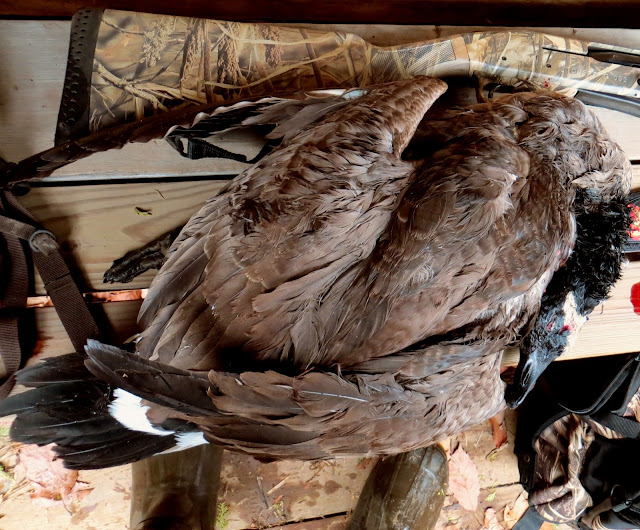 I saw the farm from a few perspectives I'd not seen before.  I used both old and new knowledge of the river to truly hunt birds, not just lay in wait for them with calls and decoys.  I loved it.  And I can't wait to go back.
at January 14, 2013

Excellent writing...felt like I was there. We are having bad luck in DE near Bombay Hook because of the warn weather. 2 Mergansers on Saturday...but the geese just will not commit.

Thanks for the compliment! The hunt in this story was last friday. We also hunted saturday and were stone cold skunked....geese were everywhere and nowhere.