It's true that a story can be too long, no matter how good it is.  So let's start at the end.  B-Senior screeched through the darkness and falling snow, "Boys, we gotta get the hell outta here!"  The hunt that had started as a casual hike across a mile-long, bone dry sand spit in broad daylight now found us wading through waist-deep ice floes and trying to save as many decoys as we could, and praying that the dog had made it to shore ahead of us.   But that's not the end of the story, either.  Let's go to the end.

So there we were, at the barn.  It would have been pitch black but for the light of the driving snow. The ATV was covered in ice, sand, and leaves, and was steaming.  Its flat tire was impossible to ignore.  I got a few pats on the back for my adventurous driving through the ice, snow, and high tide, but no one actually spoke.  All of our waders were frozen stiff in the positions that we held on the ATV as it did its best to reach dry land.  We were all bleeding on the face and hands from striking willow branches at 20mph - the other option to be to run into 18-inch deep saltwater slush, in the dark, in 20 degree air. That plan ate an ATV on that same beach a few years ago.   We chose the branches.  The dog was already curled up underneath B-Junior's truck, trying to get warm.   We had taken down about 40 decoys, came back with about 30, all of them now frozen together in a sandy, icy block. 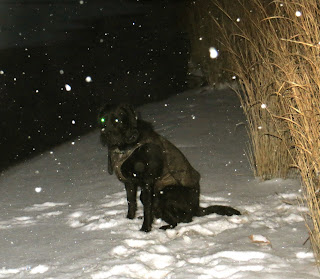 The other 10 decoys were still out on the river, in the dark, trapped between blocks of floating ice.  A few more were scattered along the beach, somewhere, under the snow, in nearly empty decoy bags that were ripped out of the ATV by the willow branches.

Our buddies had shot on "The Spit" in the morning.  No high tide to worry about, they said.  There's actually too little water, they said.  They had shot more ducks than had been shot on the creek in recent memory - years - and the incoming snow storm and cloud cover offered us a near guarantee of the same.

Our first view of the inlet showed us all we thought we needed to know.  The first few snowflakes of the storm.  Dozens of ducks swimming casually around the duck blind.  Some black ducks flew right past us at less than five yards, as we stood on the beach unarmed, and they landed behind the blind.  The excitement built. 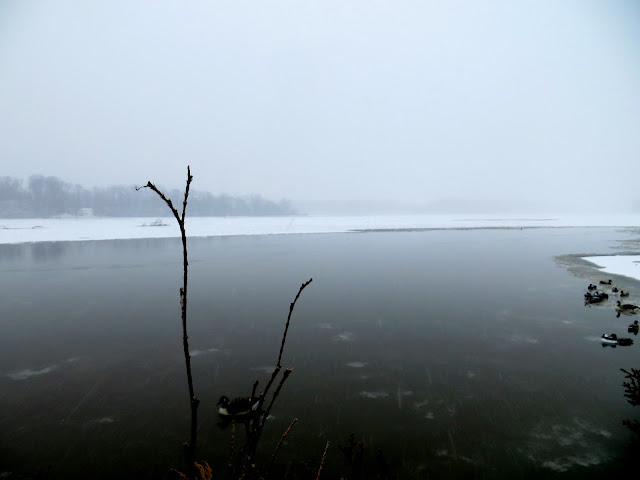 We noticed the tide trying to push into the creek - pressurized under ice in the River.  There was a bit of a current but it seemed manageable.  We put out a nice decoy spread of buffleheads, mallards, black ducks, and geese.   The ducks started flying immediately.  Our first treat was a nice flock of 15 mallards that came very close to landing in the spread.  We were committed to them doing so...entirely forgetting that it was the end of January and few ducks would be so foolish.  They circled three times - the last time in range, and then left without us firing a shot - still waiting for a belly-up shot.  That was the last time that happened. 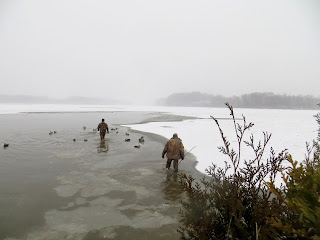 The snow began to fell quite heavily which led us to goof up a number of shots.  One with black ducks sitting in the decoy spread as we chatted, and several other opportunities to shoot bluebills and buffleheads between the duck blind and the decoys.  Easy stuff - all flew away unharassed.  Finally, we started to take our toll.  First were the gadwall.  Then the mallards.  Then geese who were flying just a bit too close.  More of each should have fallen, but some of each did fall.   I need to remember on overhead shots on geese (from rear to front), the shot has to be taken immediately overhead because the going-away shot on such a large bird is not likely to be fatal. 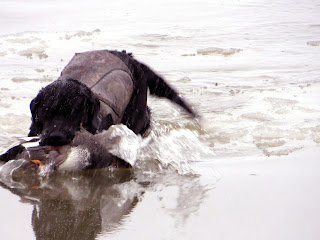 The snow intensified and became blinding.  We lost the ability to see ducks coming into the decoys, instead only hearing the whistling winds pass by the duck blind.  Geese began to sit down and chatter on the ice about 500 yards away, eventually pulling several thousand birds from local fields onto that same spot.

Then, all hell broke lose.  The dog got stuck in the ice - too thin to walk over, too thick to swim through - and then I looked the other way, only to see that half of the decoys were ripping away in the current.  What had been a few inches of water under the blind had become two feet of ice and salt water, and it was clear that things were changing rapidly.  We used my handy decoy retrieval pole to save several, but then the pole itself was nearly ripped to pieces by another ice floe just below the surface of the creek.


We tried to re-arrange the remaining decoys out of the main strength of the current, but the setup looked horrible.  Luckily, the snow probably saved us on that count, as the ducks didn't seem to be able to see much more than we could.  We killed a few more ducks at very close range (afraid to shoot birds that might sail over the ice) and then without much fanfare, legal shooting time expired on my last hunt of the season.

B-Junior and I went about the process of picking up the ice-crusted decoys, several of the anchors already frozen together, and B-Senior went to retrieve the Polaris, which had earlier gotten us within 200 yards of the blind, and was parked another quarter mile up the beach, on high ground (because you never can be sure).   We watched geese fly right over the blind - nearly striking it several times due to snow blindness, and laughed about the impossibility of that happening 15 minutes earlier, within legal shooting hours.  I looked at the full moon and the silent, driving snow, and thanked God for another full and exciting hunting season.   The peace was broken after just a moment with a brisk, "Boys, we gotta get the hell outta here!"

We might be up there around Easter. That is a great time to fish up there as well. I'll holler at you as it gets closer.