I feel like I begin too many posts with the phrase, "We live in the I-95 corridor."   Hmm.

That being said, we live in the I-95 corridor.  When it comes to planning fishing (and to a lesser extent, hunting) outings, I have to be wary of the fact that the slightest bit of rain is going to turn into a sludgy runoff plume headed straight from the area's cities, suburbs, and farms, and right into the creeks.

Due to busy work and home life, and pouring every spare minute of free time into fixing up the garden for what I hope is a two month relatively maintenance free period, I hadn't been fishing in about three weeks.  I was showing a colleague around a restored wetland site one day, and despite 99 degree temperatures, a good number of largemouth were hanging out on the water's surface at 10:00am.  The previous night, we'd had a thunderstorm at home, so I didn't even consider bringing any tackle the next day.  The water at this swamp was crystal clear.

I watched the weather all night at home - not a drop of rain - and planned on hitting the site at 6am for a little pre-work fishing the next day.  On the way to the swamp, it was clear that I'd been fooled, as small puddles started to appear on the roadside, and shrubs in the right-of-way were hung low with the weight of rainwater.
Sure enough, the water was turbid and brown from a small storm that must have passed through, undetected by me, the night before.   I really didn't have a backup plan as far as tackle or places to fish - I was already committed.   I threw a good selection of plastics out, hooking up well - again - with the YUM Shakalicious Worm, but the bass were few and far between.  Also typical of plastics (and a lack of treble hooks), I lost several fish after the hookup.  The bigger fish were especially hard to come by, and in some cases clearly did not see my lure in front of them or on top of them.  I called it quits around 7:40am with five bass and three redbreasted sunfish brought to hand. 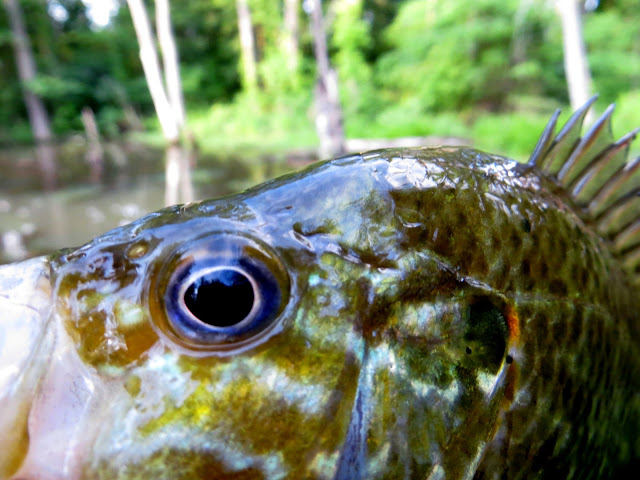 I had enough time to grab a cup of coffee and slather on some sun lotion for another 99 degree workday outside, and enough sense to hope for - but not count on - another fishing day that might skirt around the edge of a thunderstorm, rather than suffer through it.
at July 01, 2013

Fishing needs a good timing for everything to have a good catch. However, in this journey of fishing you caught some small fishes tough. Not bad after all. :p
columbia river guided fishing trips.