And On That Sign, It Said No Trespassin'....And No Fishin'! 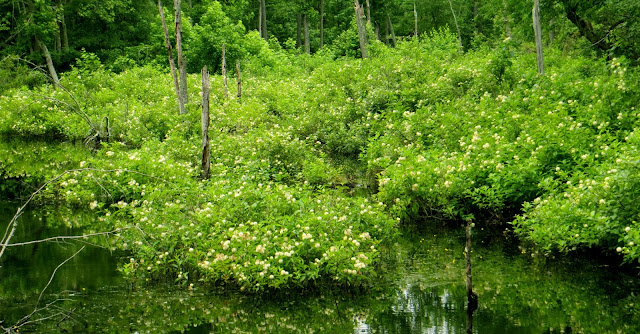 Skunked again - freakin' thunderstorms.  What's worse is that I got a chance to run out in the early, early morning to some spots I hadn't fished in two years or more.  I had a great game plan, I had all the right tackle.  I was ready, boy.  But wasn't ready for this. 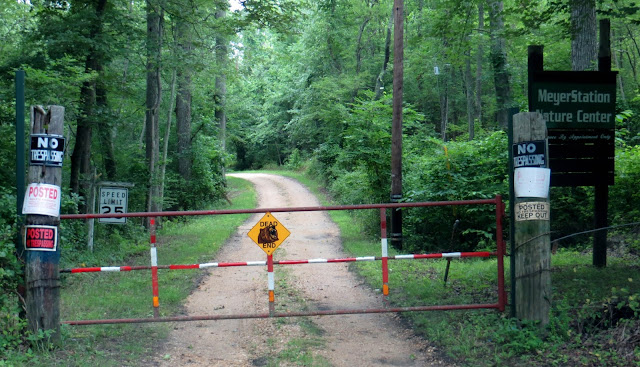 Or this, just a few miles away. 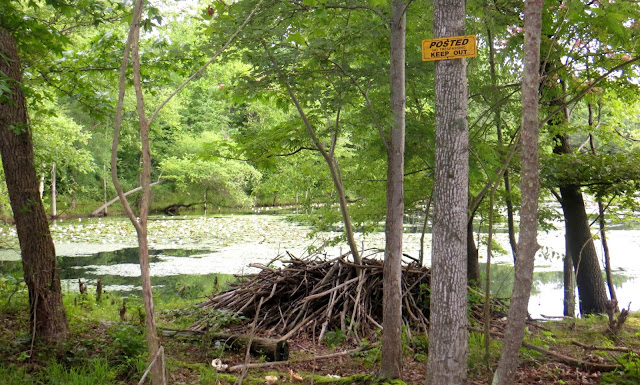 What a bummer.  I still ended up fishing four different spots, all of them either reclaimed sandpits or relatively deep beaver swamps.  I had a few very wimpy bites but no big blowups and certainly no fish to hand.  I tried fishing big weedless stuff with no luck, and once the "no luck" became obvious, the landscape didn't seem to lend itself to anything "not weedless...." 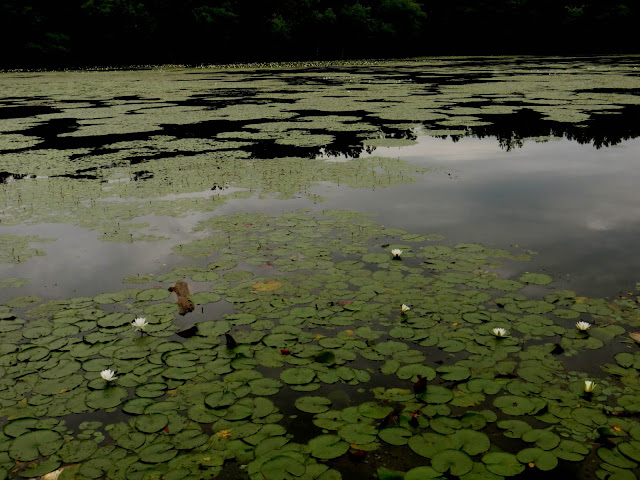 This fishing season was going in the right direction (after starting extremely poorly), but after two consecutive bad outings (at least I caught some juvenile bass the previous trip), I'm starting to have a bit of doubt about what the hell I'm doing out there, and if it's worth my time.  True, there's lots of fishing pressure at every public hole around here.  True, poachers are taking a heavy toll too, especially on our designated catch-and-release waters.  And true, it's rained almost every other day for the past four months.  I don't know.  I'm tempted to run out before work and fish this week, but I kind of feel like a bolder fishing trip might be needed to shake off the skunk....guess we'll see!

As I went walking I saw a sign there
And on the sign it said "No Trespassing."
But on the other side it didn't say nothing,
That side was made for you and me.
at July 08, 2013

Don't feel bad Kirk, we all have sometimes multiple skunk filled days. Interesting country to take a walk in right?

Beautiful country. Once you veer off the main road, it's no different than North Carolina east of I-95. Except for the lack of gators, which is fine by me.

What is your email so i can ask some questions if possible?

If your question is "Did you fish the two holes with no trespassing signs?" the answer is no. I go to the woods/water to relax and the last thing I want is a confrontation that will ruin my day. I see 'no trespassing' and then I curse and leave.

The other spots I did fish are on County and state parkland of various types up and down the river.

My question was more along the lines of "are there any bass in the Governor's bridge natural area pond, and if so, how does one target them?"

There are a lot of lilies and weeds but it looks like a decent pond. Kind of murky right now but there are small bluegills. Is summer fishing here any good, and if not are there any areas close by that you wouldn't mind sharing?

Haha, well, I never know with the "Please Call Me At Your Earlier Convenience" messages on this blog.

Your question is a good one. I've written about the fishing - and poaching - at Gov Bridge NA before, on this blog. In theory, it should be an ideal spot for bass, with its gravel bottom, cool water, and heavy structure. Plus the "catch and release" requirement. Unfortunately, the bass are extremely skittish and spoiled. I've caught several there over the years, and narrowly missed some giants there, but it is tough, very mental fishing.

Now onto problem #2. The property has a GIGANTIC and well known poaching problem, where guys will wade into the shallow areas with (2-man) seine nets and net up as many bass as they can fit in a few 5 gallon buckets.

So honestly, I think GBNA's bass population is hurting a little bit. If you want fish, simply travel up and down the Patuxent. Since it is mostly forested, the shoreline fishing is tough, so either put in a small boat and go nuts, or find the abandoned sand pits that have been requisitioned into parkland, from Fort Meade, past Patuxent NWR, all the say into St. Mary's County. You'll find fish. You just have to drive.

That's too bad about the poaching. What are they doing with the fish?

About the patuxent, where is it fresh and where is it brackish? I've launched a kayak at the natural area and to me the river there seems like it couldn't support any fish of size. What parts of the river might hold fish? I was thinking about Jug Bay for catfish. But i'd rather go for some bass. I was also looking at Cash Lake in Bowie, have you fished there?

Jug Bay is more of a perch and catfish area, from what little I know. Cash Lake and the rest of the impoundments on Patuxent NWR are great bets, but getting permits for the different lakes can be tricky. There's also Centennial Lake and Triadelphia Reservoir farther up in the watershed. As for the River proper, go to kMart and buy a $200 kayak and get out there. Private property restrictions and the forested banks make shoreline fishing really tough.