Beachin' It Up with the Toddler Crowd

For years, we've made annual treks to the beach each spring between late April (our anniversary) and mid-June (Amy's birthday).   Sometimes, several trips in that short period.   All of it started when I moved away from the beach (2.5 hours instead of 25 minutes), 14 years ago.  In 1999, it was my best man's wedding in Va Beach.  In 2000, my bachelor party in Va Beach.  In 2001, trips to the Outer Banks, RI shore, and Cape Cod.

The nature of these trips, which actually date back to 1994 (a cold ass April surfing trip to Va Beach in my sophomore year of college), continues to change as the years move on, and that's something with which I struggle.

Even after we got married (2000), I would make a point to charge pretty hard in the outdoors at least a few times during the trip.  For a few magical years that Amy's parents had a beach house in Southern NC, we'd go down in September and always get hurricane swells.  We'd time the trip for dawn low tides, and I'd surf from dawn until 10am every day, and possibly get a quick evening surf in, spending the rest of the day lounging around and attending venues and activities that my wife was interested in - hey, the system worked.

Not anymore, with Sir Hank, Mayor of Crazy Town. Having a kid has made these beach getaways a mental health necessity, but has also prevented those trips from being really exciting from an outdoors standpoint.  To be honest, at least twice I've scheduled (post-child) beach trips without checking a tide chart. Quelle horreur!   I just knew that nothing outdoorsy and fun would happen.  What a bummer. 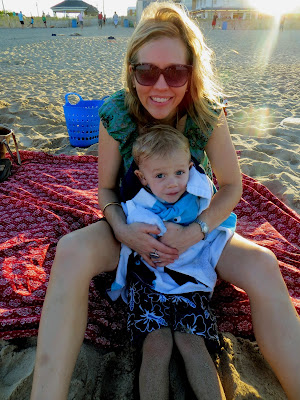 Things are changing.  In the last few months, Hank has sat through an entire movie at a movie theater, caught his first fish (well, ermm, mostly), and swam/thrashed about in the open water of the Chesapeake Bay without going all crazy on me.   I'm hoping that translates into a calmer boy who doesn't destroy Mommy's Will to Live in the three hours it might take me to go fishing or surfing down the street from our rental house.  In the long run, I'm hoping it translates into having a little boy who enjoys something about the outdoors, even if his tastes aren't mine!

We'll see.  I miss surfing.  I miss saltwater fishing.  I miss the ocean in general.   It is so exciting to be teaching my son about all of it, and now that he's seen surfing actually happen, he's pretty excited to try it.  I'm not ready for that, though!  Hank's swimming skills leave much to be desired.