Getting Real About The Brutality of Growing Food 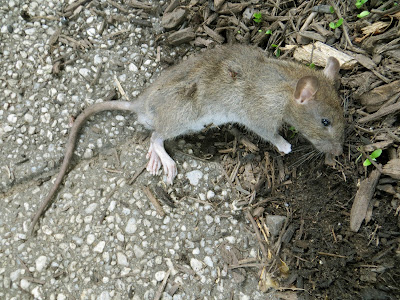 This is Rattus norvegicus, the Norway Rat.  He's kind of cute, even for a rat.  How'd I get the photo? Well, when he turned away from me, I  lined him up with my pellet gun's primitive iron sights, and when he turned back toward me, I put the pellet through the area right behind his shoulders, right through the heart and lungs, bounced off of a bone, and tore back out the same side it went in, near the stomach.  He died in less than two seconds.

Beyond pooping all over our deck, our yard, and my garden (rat feces are known to contain many diseases contagious to humans), this rat had decided to try out my cucumbers.  You may say, "Just eat around it!" or "Just grow more, so the rats can have theirs, and you can have yours."  He'd been destroying about half of my crop, actually.

No.  I understand the cost of getting food.  I am not competing with invasive, disease-ridden Norway Rats for the food I'm growing and irrigating in my own yard.

An article called "Backyard Chickens - A Growing Problem" was featured on Yahoo earlier this week.  The author, Ms. Simone Lai, discussed several problems with the popular movement to grow chickens (for egg production, not meat)  in suburban and urban environments.   One of the problems, although I might also refer to it as an opportunity, is that many of the Young Aspiring Wayfarer-Wearing Chicken Growers have never grown anything.  Not a garden.  Not chickens.  Not even a windowbox herb garden that might be pecked away at by spider mites or city pigeons.  They don't understand the basic ecology of energy limitations in the urban/suburban ecosystem, which dictates that if you create new sources of calories, guess what, the critters are coming to get them.  And life is going to ask you, "How bad do you want it?"

The first deer lease I ever got was on an organic vegetable farm.  The owners were non-hunters and in fact, rarely ate meat.  But they wanted those deer gone.    I tell people that story (with more details) a few times a year and people are frequently confused....."But I thought they loved the pretty animals?! It's so horrible and brutal, sigh."   People don't understand that as soon as you start growing food, you are going to have to compete if you actually want to keep, sell, or eat any of that food for yourself.   So that's right.  The harvest of your organic cruelty-free tofu almost assuredly requires an annual slaughter of the deer who would otherwise eat it, resulting in a quadrupling of the price of that already expensive cruelty-free tofu.

Hunters pay a pretty penny to be able to hunt over fields of food intended for American vegetarians.   If you think Whole Foods salad bar is expensive now, at $8.99 per pound, can you imagine if rodents, deer, rabbits, and geese ate 10-50% of the year's crop?  We're not talking just a 10-50% increase in price, because those crop fluctuations actually impact the agricultural markets.  If ethanol producers are buying corn at $13/bushel, Whole Foods is buying it at $11/bushel, and half of the crop is lost to geese and deer, then guess what....Whole Foods won't have corn. 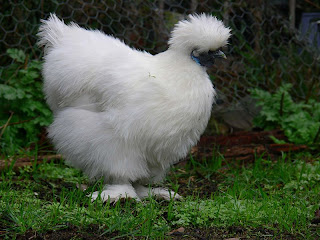 One of the problems discussed in the Yahoo article above was that people are getting fed up with cleaning up after their chickens, feeding the chickens, and protecting the chickens from their own stupidity, and so farm animal rescue facilities are being overwhelmed with thousands of unwanted high-end fancy chickens.   I asked myself, "Why not just kill the chicken? After all, it's going to die in the rescue facility."  But I got back to the same exact point as the "Cruelty Free Tofu,"  being a responsible food producer means being able to make difficult decisions like, "This particular chicken is not a good match for our needs," and to move forward with the lethal decision to terminate the animal.   No different than killing a rogue fish in your aquarium, putting out mouse traps in the kitchen, or having to put a pet to sleep.  Yes, those are all very different things, but the moral consequence is the same - an animal is going to die because you decided it's time for that animal to die.

Apparently most of these folks purchase chickens with no intent of killing the animal (either for food or another necessity), and just hope that "when the chicken is done, maybe it will die in its sleep, and even better, maybe it will bury itself somewhere!"  But the reality of growing food has not changed since the Agricultural Revolution 7,000 years ago.   If the raccoon eats the chicken, then you don't get any more eggs. If the chicken gets sick, it won't lay more eggs, and it might get your other chickens (or your family) sick.    If you're fine with that, why did you purchase a chicken in the first place?  If you're not fine with it, please approach the topic with an adult attitude about what your responsibility as a human being (and food provider) truly is.

I knew that rat was around the garden somewhere, hiding in the slightly wider swath of destruction caused by a suburban raccoon (who was fenced out and did not return).  Nibbled leaves, destroyed tomatoes and cucumbers, and even a tuft of fur tipped me off to Sir Rattus.   I set traps for three nights, a month ago, and trapped three rats (You gotta love City Living).  Yet this rat remained.  I largely decided to let it be.....until I saw it in the garden, in broad daylight.  Once I had seen it, I couldn't pretend it was only rarely in my garden, there was no chance it would survive the week.  And it didn't.  After I killed him, I strolled into the garden and picked seven cucumbers - four ruined by rat bites, and three without a single toothmark.

If you're going to grow lettuce, or herbs, or chickens, or goats, don't pretend that problems won't occur.  Plan for the inevitability that you'll be faced with a decision about whether your food is more important than food for the feral cat down the street.  Failing to make a decision on how to act (including possibly giving up) is not an option, and when livestock, even chickens, are involved, that failure is unethhical.

Wait, I thought eggs came from the grocery store. What the deuce?

Best way to grow chickens is for both eggs and meat. Get yourself some laying hens in March (that way you don't have to incubate them), then enjoy the eggs all spring, summer, and fall. Then put them in the pot come December, so you don't have to keep them warm when the egg production slows. Get yourself some new laying hens in March, and start the whole deal over again.

I feel your pain. The vermin that have trashed my vegetable garden and that have decimated my butterfly garden are rabbits. We have no predators in my suburban development, so there are probably close to two dozen rabbits on and around my 0.4-acre suburban lot alone. I think we're on the fourth litter of this year. Can anyone give me a good recommendation for a pellet gun to thin out my rabbit population? Seriously, I need to buy a pellet gun. What should I look for?

You don't need to feel bad on my account...I hate rats and birds, cats, dogs and most children.

SA - having been through the pellet gun game for the last 1.5 decades of City living, let me help you out. I would first try a large caliber if possible (.22 or .25) gun with high power and see if it's too loud for your use (i.e. your neighbor's concern). I would stick with the large pellet size and then march down toward subsonic pellet guns, knowing that once you get below about 700fps, the pellet loses its punch after 25, 20, 15 yards.

Thanks for the advice!

Very nice, thanks for sharing.

I remember I first learned the term "rattus norvegicus" from Henry Rollins on the Black Flag Family Man album. I thought he just made it up.. haha. I had to try to look it up. Its too easy these days with wikipedia..