Getting to Know Your Food: Peppers Anyone Can Know and Grow

So, you fancy yourself a conservationist, environmentalist, doomsday prepper, or sustainability guru, and you don't grow any food.  Huh.  Yes, I know a few of you live in 110sf apartments with half a door and no windows and no roof access, but most of you do in fact have at least one sunny window and probably access to a rooftop or courtyard garden.  A lot of  you, whether you know it or not, also have access to a community garden space, which usually runs between 100sf and 500sf (150sf is enough  to grow lots of food, most of the year).  My current garden (new in 2013) is roughly 125sf of intensely planted and irrigated beds, to give you an idea.

So why aren't you doing it?  Like a lot of things people-related, perhaps you just think you can't.  Or you never have, and you don't have time to learn.   But here's what you need to do:  You need to grow peppers. You need approximately 0.75 square feet of sunny, decent soil to grow a pepper plant.  Don't misinterpret me as saying that home pepper growing will have any significant impact on any of the world's problems.   But if you don't grow food yet, here's why you should start with Capsicum spp.and only then make the educated decision that you "just can't grow food" - because here's my bet - I think you can.


Why grow peppers - The Gateway Drug to Urban Gardening?
1. They are hard to kill
2. There are hundreds of varieties, many of which (listed below) are easy to grow
3. If you have a limited tolerance of taste (or heat), there are varieties for you
4. Peppers are easily pollinated, even by household insects like kitchen ants, houseflies, and gnats.  You can also pollinate them by hand if you really like.  Takes 30 seconds.
5. It will give you a direct relationship with your food, which psychologists have learned is an important thing for people living in a turbulent time, say, 2001 to present.

So let's look at some peppers!

1. Mini-Bell and Baby Bell Peppers.   I can't say enough about these peppers.  If you don't like hot peppers, and you're only somewhat of a "pepper person" when it comes to that distinctive, smoky flavor, then Baby Bells (usually modern hybrids) and Mini-Bells (usually heirlooms) are for you. The pepper walls are thin, and seeds are easy to remove.  They are easy to slice into thick chunks (for those who love pepper flavor) or very thin slivers (for those on the fence....use paper thin slices as a pizza topping).  They produce many small fruits, which you can pick whenever you like.  I started growing the Ohio Mini Bell (heirloom) in 2010, but this year switched to the "California Wonder" Baby Bell, a modern hybrid. 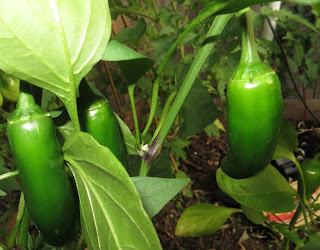 2/3. Jalapeno Peppers and Mild Jalapenos.  Speaking of smoky pepper taste, here's the Jalapeno!  It's a hot pepper with the shortest growing season of all the hot peppers!  If you live north of the Mason-Dixon line, that's important, as growing habaneros can be a roll of the dice in mild, shorter summers.   Jalapenos can be used for all kinds of things, and now, several varieties of "non-hot" Jalapenos are available, to impart that smoky taste to anything, without adding the heat.  On a summer morning, you can pick an entire bowl of these things from two or three plants, and feel really good about your food growing success.


4. Cayenne Chili Peppers.  Cayenne chilis - your standard "chili pepper" - are really not difficult to grow, and produce tons of fruit.  Unlike Jalapenos, in my opinion chilis do not impart much flavor but do in fact bring a bit of blazing heat.  Unlike most other peppers, they can be effectively dried and stored for a year or longer, and crushed to bring that same heat to a mid-winter recipe. 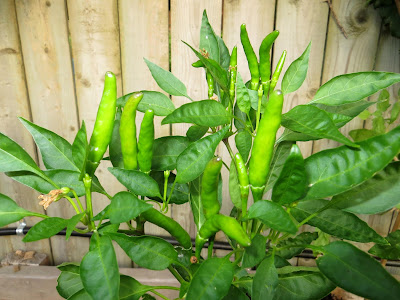 5. Thai Chili Peppers.  I really like Thai Chilis.  They are easy to grow, even inside the house, and they magically get pollinated by something, because I sure never see any bees on the plants.  Grow in a pot next to some Thai Basil and YOU WIN!   Thai chilis have that distinctive form of many "indoor" peppers, with fruits sticking straight up in the air.


Honorary Mention:  The Fish Pepper and Friends.  Some of you ethno-food people out there really need to get on the stick and grow your own food.   I'm not going to waste time explaining why.  Just do it.  In our region, the Fish Pepper is an important one.  Brought to Baltimore and Philadelphia by slaves who had lived and cooked in the Carribean, the fish pepper was grown in waste soils in the worst parts of town.    As those cities didn't have significant levels of slavery into the 1860s, the African-American communities were "free" to live on prior trash dumps and other undesirable areas, and work in relative servitude for the upper echelons of the white communities and businesses.  The fish pepper was an important "secret" ingredient in fish sauces and soups through the early 1940s, and then it disappeared until someone found a jar of dried fish peppers in the 1990s.   Now it's sold in limited quantities by specialty seed dealers.   It has a semi-hot, very fragrant smoky taste.  See, you should grow a plant like this and impress all your friends with the story. 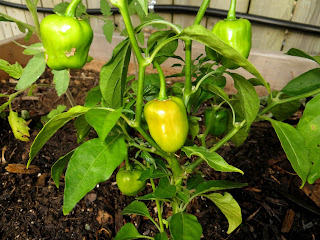 1. Habanero Peppers et al.  Okay, you all think you want to grow Ghost Peppers and Scotch Bonnets and Habs, and that's great.  I love them all!  But first of all, those need 90-110 days of HEAT to grow.  This means you may likely have 0 habaneros per week for the entire summer, and the week of September 20th, you will have 400 ripe habaneros on your hand.   This is problematic because a standard "hot" Caribbean recipe calls for roughly one half of one pepper, which can be purchased for roughly 12 cents at the supermarket (preferably you will drive your SUV to the store and throw trash out the window on the way there, while menacing bicycle commuters). Oh, back to the point -these peppers require attention and plenty of water once they set fruit, so they are not easy.    I hate that I grow these peppers - it's kind of a waste of soil, water, and effort.  I plant four to six plants of Ridiculously Hot Peppers every year, and usually fail to get peppers off of at least 50% of the plants before the October frost kills them.

2. Heirloom Bell Peppers.  Y'all don't know about tobacco mosaic virus, but if you try to grow your grandmother's favorite heirloom bell pepper, you sure will. Tobacco, tomatoes, and peppers are all in the nightshade family together, so they share things like giant hornworms and tobacco mosaic virus.  Heirloom bell plants, unless well cared for and in optimum soil, set relatively few fruits per plant.   Most of the heirlooms have very thick walls, which are great for stuffing with tasty deliciousness, but ensure that it takes forrrrrreeeeevvvver to grow a single pepper.  If you can put in a garden plot with a row of 10 bell pepper plants, that is how you grow heirloom bells.  Not one plant in a container.

3. Poblano Peppers.   Poblanos are one of my favorite, but dang, are they hard to deal with sometimes.   My experience is that they require more water than any pepper except the habanero, which is annoying.  The big problem is the utility of poblanos.  Like big bell peppers and unlike Carribean hot peppers, you usually want several at a time to complete a single recipe for a family or a group of guests.   In my three years of growing Poblanos, I've been very disappointed at how they seem to ripen one at a time, and if left in the kitchen, grow moldy within a few days - as you're waiting for just one more to ripen.   Like big bell peppers, only trifle with these if you have a large garden space (around 300sf).

Additional resources (seriously, check these out):

Great post. I also like to grow chiltepins, mainly for nostalgia's sake since I once worked in the oilfield in south Texas. They are slow growers too and get very big with loads of tiny fruit. I plant them in big pots and overwinter them in the basement. I get plenty of late peppers in the first year and tons the second.

Very interesting post. I love peppers of all shapes colors and varieties.

You can't grow a garden without peppers! I figured if I wrote something like this up, maybe someone would take the initiative and learn to grow just a teensy bit of their own food. You never know, it could be life changing, and they could be filleting wild fish and bow hunting urban deer a few years later...

Back in my single days I was an avid gardener of herbs, tomatoes and peppers. I enjoyed it but it was a commitment. This year we eased back into the herbs and I have a good source for tomatoes, but man I miss the peppers.