Fishing was a rare treat this summer, which is unfortunate.  Last week I decided to carve out a little time to chase big largemouth bass and honestly, it could have been worse.  I caught one frankensunfish and brought zero bass to hand.  But I came so close, repeatedly throwing big baits into heavy cover.   So close.  How close....

5.  Blind Willie Bass.  Walking a popper back alongside a log, I watched a gigantic fish blow up the water behind it, then beside it, then in front of it, then behind it again, before finally getting bored with the chase.

4. Long Distance Commuting Bass.  Walked a 4" Rapala Gold Shiner around an old stump and got a monster hit.  The fish went down and for at least three seconds I couldn't even see my line.  In that time, the fish moved across the channel right toward me, and under a sunken tree right in front of me, on the bank.  My line got loose for just a moment, and I was rewarded with two treble hooks full of rotten leaves.

3.  Domestic Spying Bass.  The smallest fish of all, at about 15 inches, came the closest to being brought to hand.  Tricked by a red sparkle YUM Shakalicious, it ran deep, jumped, and made it to the bank, where it threw the hook.  It sat still in the shallow water and I awkwardly tried to grab it like a loaf of bread, getting nothing but a handful of weeds.  Obviously, it swam away.  Except it didn't.  10 minutes later, when I came back to cast from the same spot, I stepped into the water, causing the lazy fish - now in two inches of water - to jump once more, away from me and back to safety.

2. C-Blocker Bass.  I'll admit, I've had this problem many times in the last few years.   A big fish is eyeing up the lure, and the magic is about to happen.  Up comes an 8 inch teenager and short-strikes the lure, earning an eye roll of the bigger fish, who swims away.  Yeah.  Had a few of these.  Par for the course these days, as I keep pushing toward larger lures.

1.  National Geographic Breech Shot Bass.  This was the most exciting moment of the afternoon for sure.  I landed the big golden Rapala inbetween two brush piles in deep water.  At the moment I twitched the lure, the tiny ripple of a fish lip broke the water and kept swimming in an arc across the surface of the water, breeching, then diving in slow motion.   Nature documentaries always photograph big pelagic fish this way and it was amazing, like watching a subway drive past in slow motion.  I just saw the side of a gigantic fish, followed by more of the side of the fish, and  my line tightened, and my drag ran out, all in slow motion.   After the longest second and a half in my fishing lifetime, the fish was deep, the hook was thrown, and my Rapala was slowly floating back to the surface.

Hottest Waterfowl Hunt of a Lifetime 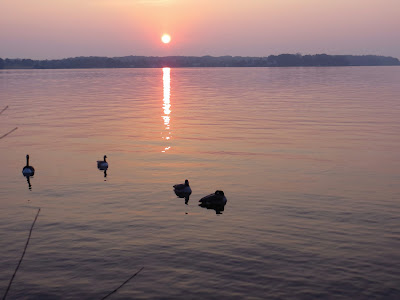 Had we killed some geese on this 95 degree morning, it would be a fabulous bookend to my 2009 blog post, "Coldest Waterfowl Hunt of a Lifetime," where we hunted hard in -17F windchills (-4F air temp) and ultimately prevailed over the geese.  But prevail we did not, on this humid and sweltering morning.    It was hot (85F) when we left the dock at 6:10am.   It was hot (88F) at dawn.  It was hot when we picked up the decoys at 8:40am (91F), without seeing or hearing a goose.

That said, it was a fine time.  There was a breeze, at least for awhile.  Several good flocks of ducks stopped in to check out the well-managed habitat around the blind.  Hope the ducks come back for duck season.   I hope to hunt hard and hunt smart this season.   Guess I'll have to wait for another day to get the smartness going.
at September 23, 2013 2 comments:

I Scouted the Hell Out of this Land, and All I Got Was a Nest of Seed Ticks

I apologize for the profanity.  Well, no, I don't.  Well, I do, basically.  Half-way.   Well, thank whoever the Patron Saint of Foreseeable Miracles may be, but I finally got written permission to hunt a property that I've been asking to hunt for a few years.  The landowner never said no, but my request never really got anywhere until I built the relationship and was able to bring it up multiple times in a row.   Now, I need to understand how deer actually use this property.   Only way to do that is to spend time there. 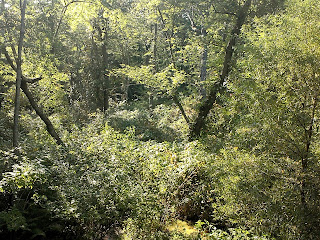 So yeah, it's marginally overgrown.  The photo to the left is looking down a 60 foot cliff.  Cons:  not being able to see anything below that canopy of porcelainberry.  Pros:  well defined deer trail on the cliff face.  Tactic:   wait until the leaves fall. 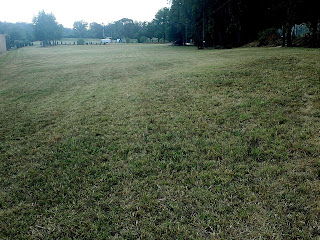 Landowner said that one small herd of deer beds down in the overgrown weeds clearly dominating the right side of this photo.  OH - you don't see the weeds?  That's because two weeks before archery season, the landowner got sick of the weeds and bush hogged them.  The herd freaked out (under the bush hog) and ran off the farm and onto the adjacent county road, causing an accident with a car.  Brilliant. 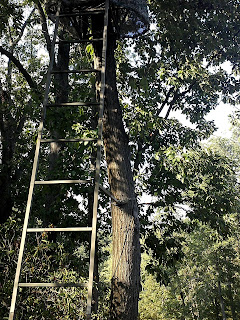 A long-standing client of the landowner has hunted here for many years and received the "first right" of hunting locations.  That he picked the best spot on the property - a mowed, grassy slope connecting the upper fields to the lower swamp - is no surprise.  That he chose to put a 20' tree stand right on the crown of a 60' slope is a bit of a surprise.  Guess the guy likes shooting long distances, straight down. 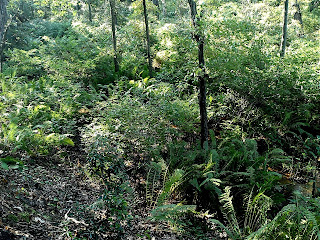 Bottom of the deer trail.  Can you see it? Above all, it's great to get outside this time of year.  Even though I walked through several chiggers and one solid nest of seed ticks, resulting in a total 30-40 bites.  The deer are there, and I'm looking forward to cooler weather to go find them.
at September 16, 2013 5 comments:

All Your Creativity Is Belong To Us 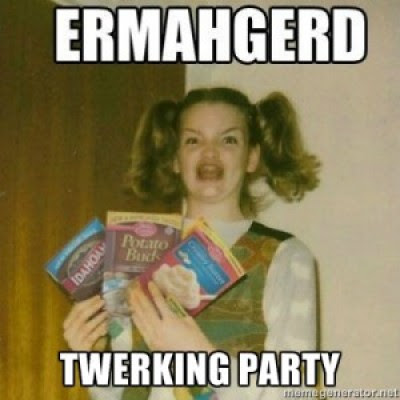 Anyway, I'm working on a big writing project.  I have no idea what I'm doing.  But I'm writing.   Thousands of mostly coherent words spanning into mostly coherent paragraphs into slightly coherent chapters,  that hopefully are not rip-offs of the music I've been listening to lately, like Lucero's "When I Was Young."

I've also been writing a fair bit for work, and writing lectures for the night class I teach.  My creative energy is the center of an interesting tug-of-war between things that need to get done and things that I would really like to get done.  Apparently, it's not going to get any simpler, as I found out in the middle of writing this that I've been accepted as a member of the Outdoor Writers Association of America (OWAA).   I'm feeling excited and challenged by it.  I blogged awhile back about my reservations on OWAA, namely that for several years their membership screening process blocked out bloggers in favor of people who were perhaps "professional outdoor communicators" but not necessarily what I'd call an "outdoor writer."  Then ago, I'm sure this year's suite of Marketing Interns with OWAA memberships might say the same about me!

Anyway, I pledged to try it.  I hope that my writing improves and that my ability to sell my writing improves.  Those really are the only goals.   The other ethereal stuff has always been easy for me, "Meet new connections," and "share a river with a new friend."  I do that everywhere.

Okay you bastards, I have to write a lecture now. Love you all, you bunch of lurkers!

Got a chance to get out for a few hours with some friends somewhere on the border between southern and central Maryland.  I've been out so few times this summer that I was just focused on having a good time.  Surprisingly, we caught striped bass (none legal) in the channel and a good bunch of white perch against shoreline structure.  One buddy caught and kept a 13-inch perch; we returned everything else unharmed.  The wind was up and the water was cloudy - live bait would've helped us quite a bit.  Beautiful day out...hard to believe fall is here.  Well, it's close.  It was 87 degrees again today.

Hope everybody's getting outside - we're turning over the summer garden, scouting for bow season (that 87 degree thing is a kicker), and planning for our first resident goose hunt later this week.

See you on the water!