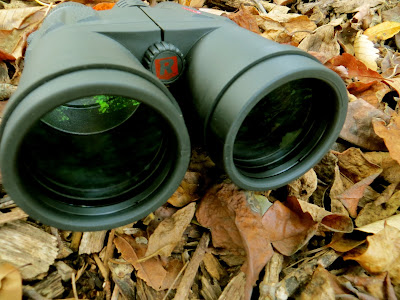 So I finally bought some big boy optics.  I didn't want to, I assure you.  I don't like the price or the weight of adult-scale optics and it took me about three years of warming up to take the plunge.

I had many options to choose from at my local Mega Sportsmans Store, but was pretty disturbed at the gap between low end optics ($40-$100) and high end optics ($250-$2,000).  If you want to buy a pair of binocs because you need one, a quick handling of the cheapos will leave you feeling unconvinced to say the least.

Redfield brand binocs seem to sit in that no mans land of price ($120 - $230), and it's hard to know what benefits you're getting over the $75 cheapos and what bells and whistles you're losing over the $400 Nikons, for example.   But let's be straight here.  I am buying binoculars to extend my visual range when I'm doing something else.  I'm not a birder.  I've used them scouting for deer and scouting for ducks.  I plan to use them to scout for surf when riding down the beaches of North Carolina and Florida.   In all cases, I plan to put the binoculars down and go do something else.

The binoculars I ultimately chose for this type of workload was the Redfield Rebel 10x50.  They are a solid handful and at 30 ounces, are a bit heavier than I hoped.    That, along with the very cheap case and woeful chest harness included with these retail $159 pieces (as always, I paid less than retail because I can't afford retail), really seem to be the only sacrifices made to keep the price point on the Rebel.

Magnification is everything you'd expect of a $250-400 pair of binoculars and clarity is amazing.  I bought these because I needed them to handle low light conditions, and they excel in that role.  That is, until their 30oz weight starts to cramp your wrist.   It should be noted that the new-to-the-market Nikon Trailblazer 10x50 ($169) weighs 25oz, while the Bushnell Marine 7x50 weighs 36oz, so my weight wimpiness is a factor in complaining about the Rebel's 30oz package.

This pair of binoculars actually feels good in my hands, despite the weight.  Like most optics these days, they are designed around the comfort of the user, even if it adds weight.  They'll be in the field with me quite a bit this winter - you'll see pictures of them again!

Performance:   A
Price:  B+
Handling/Ergonomics:  B
Total Grade:  A-