Not the Ideal Way to Spend Late November

Yeah, fun times here at the River Mud Ranch.   I've been exhausted.  I mean, having to pull over on the way home from work and sleep exhausted.  The "cold" I had was only sort of kicking my ass, meaning that I'd only missed about a day and change of work and lost a bunch of sleep due to coughing.

But after two weeks, I sucked it up and went to the doctor, where the "medical professionals" say I have a "potentially life threatening" case of some minor thing called "spasmodic bronchitis."  Unlike acute bronchitis (which I also currently have, apparently, but to a much lesser degree, and something I've had dozens of times in my 39 years alive), spasmodic bronchitis is a non-boogery situation where for some random reason, your lung tissue becomes irritated and decides to swell up, and stay swelled up, to the point that the bronchioles are occluded and can receive no air.  Disclaimer: I only know the term "occluded" because some of our tidal wetlands at work become "occluded" from tidal flow.

So anyhoo, that whole "I'm really tired" thing is apparently an "I have to sleep every three hours because my body doesn't have enough oxygen to continue" thing.  Whatevs, my bad. 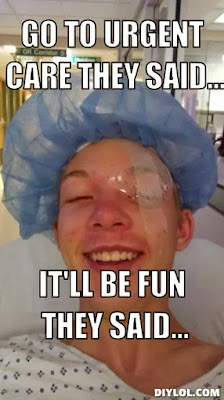 In addition to slowing me down on a lot of otherwise really productive stuff happening at work,  this illness has been a 20 day kick in the shins to my effort to finish my first novel in November (I began writing in September).  I'm roughly half done (30,000 words), and this illness is a real hindrance.  Why does it matter?  Because I am a world champion of getting things started, and somewhat of a court jester of getting things finished.   In addition to those somewhat important things, there's the fact that hunting season is ON....and I have no physical interest in sitting in a duck blind or tree stand right now.  And in addition to that relatively trivial pain in the rear, there's the fact that my four year old is starting to understand Christmas, Santa Claus, the actual Christmas story (minus historical inaccuracies like Jesus' actual birth date), etc.  And I've literally slept on the couch for a good two weeks of that.  Which makes me disappointed with myself.

So I hope y'all are getting outside (unless you're the jerk wad who built a secret duck blind 251 yards from mine, in which case, here's a bag of used sinus wash).  I'll take another puff puff from my albuterol inhaler, and pop another prednisone for the rest of you.  Nobody steal my azythromycins, though.

Bummer to hear all that, but at least you're on the path to mending. Could be worse.

Good luck, and hopefully you'll be able to enjoy most of the holiday fun with your little one.

Hope you get into a duck blind or treestand real soon!