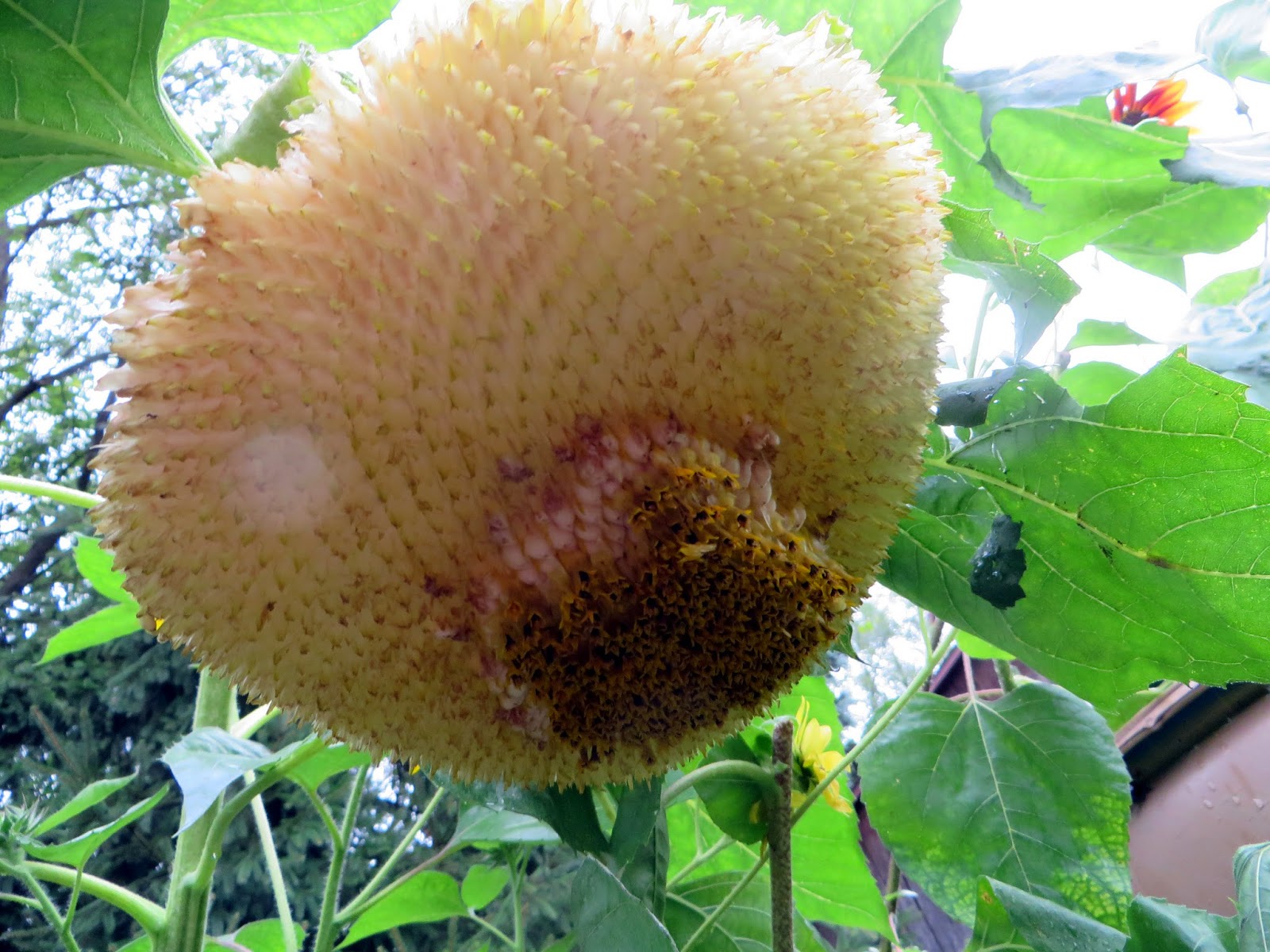 Recently, I was working in the garden with my five year old son.  He craned his neck to look up at the Black Mammoth Sunflower he had planted as a seed four months prior, now past full bloom and developing the characteristic striped, swelling seeds - but many were missing already.  He had picked a peculiar spot in a raised bed, so I did my part and planted a few dozen more sunflower seeds around.  You know, just in case.   "Daddy, why are all the seeds on the ground?"  I explained to him, "Well, buddy, the squirrels have been climbing up the plant and eating them."  He looked at me impetulantly, "But you said the sunflower seeds are for the birds."

Yeah, he had me.  I responded, "Well, they're for whatever animal gets them first, I guess."  His irritation was sustained and he repeated, "But my sunflower was for birds.  Not other animals."  I then presented him with a choice - to 1) cut and dry the seed head, and toss the dried seeds out for birds in the winter, when they are truly needed, 2) cut down the plant and dry it for burning in the fire pit so "no other animals could get it," or 3) to let it be, knowing that my young son's sole interest in growing that plant (a reasonable, achievable one at that) would be completely unfulfilled.

He chose to let nature - such as it is in a backyard garden in an 80 year old neighborhood in a city of 700,000 people - take its course.  Days later, all of the seeds were gone, split seed coats littering the garden and sidewalk, along with squirrel, rabbit, and raccoon droppings, and I cut the plant down entirely to begin to make room for winter cover crops.  Goldfinches flitted about the other varieties of sunflowers, but my son's plant did not fulfill what he believed was its highest and best use - providing food  for our local birds.   Our collective choice was to grow out that small sunflower patch this summer, and I weeded the garden to make sure the sunflowers could dominate the area.  That choice was what we refer to as "ecological engineering."  Something lived and something died. 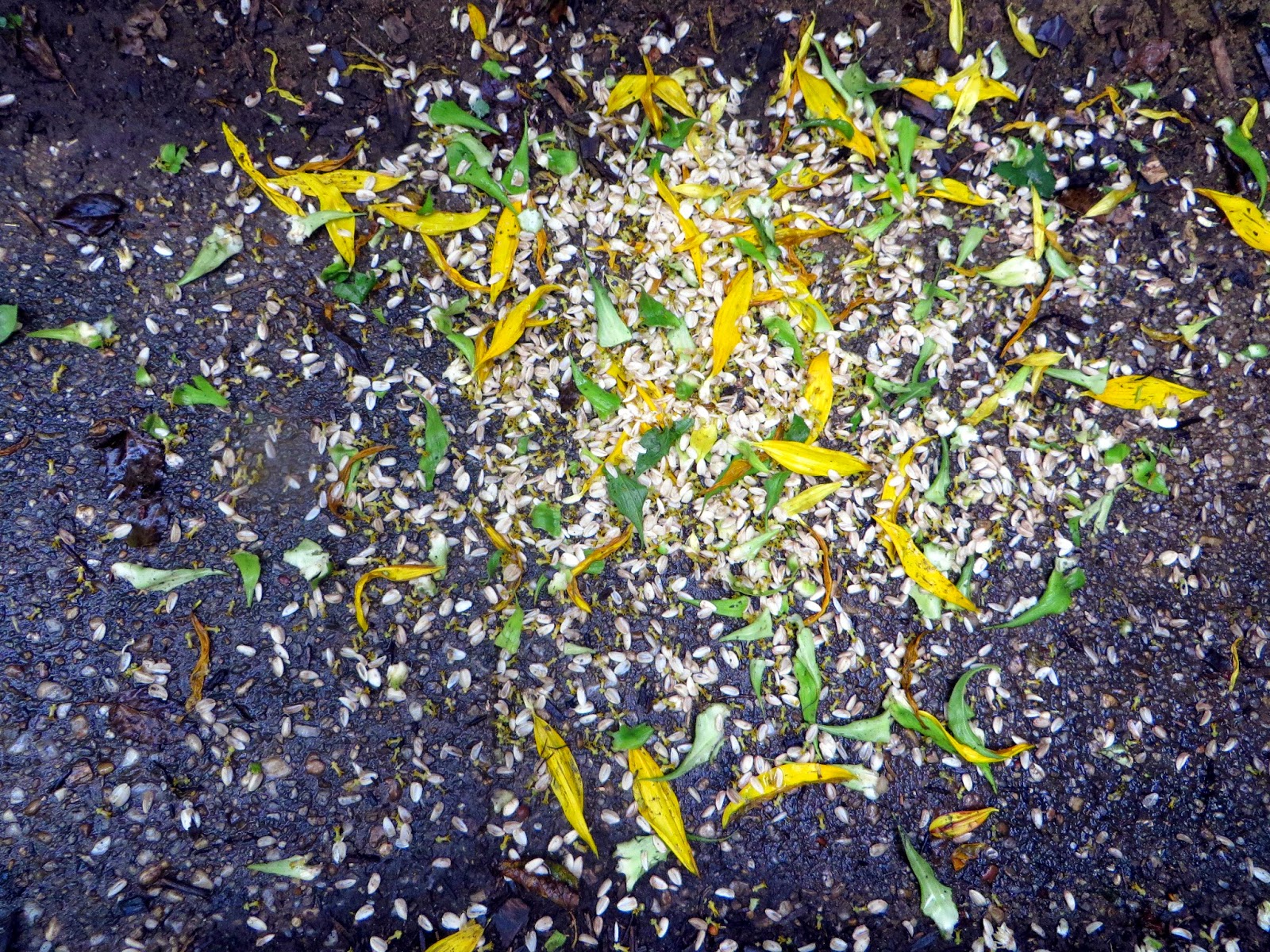 Every weed I pulled signified that I was selecting (or engineering) the potential value of the sunflowers over the potential value of the weeds.  A great example is the extensive number of poison ivy seedlings that I pulled.  For those who are unaware, poison ivy can intake a preposterous amount of carbon dioxide - thriving near highways and urban centers.   The poison ivy berry is very nutritious to wildlife, as well, though the plant is very much a gardener's nuisance to those of us who are allergic to it.   Likewise, the sunflower can thrive in poor soils in urban areas, and is known to uptake high amounts of metals from urban soils - that's a great thing.  And the seeds' value to wildlife is known to even toddlers.   But at the tiny scale of my garden plot, I was subconsciously making the decision that the human-calculated benefits of growing sunflowers outweighed the benefits of growing poison ivy.  Nearby, my neighbors faithfully mow their extensive lawn, ensuring that natural succession of wildflowers, shrubs, and trees never takes place in the footprint of that yard.  Again, that is a decision of assigning value to a piece of space on earth - not only what that space currently is, but what its highest value might be.  At a larger landscape level, we call this the valuation of ecosystem services, and its technical application is ecological engineering - how are those desirable ecosystem processes kept in motion, or placed in motion?  Even a toddler can understand the concept and its relative importance, and I believe that most high school biology students could grasp the broad impacts of these land use decisions on natural systems.

As I drive to work through southeastern Baltimore, I'm confronted with a landscape of pavement interrupted only by thin, stream valley parks.   These valleys, filled in 300 years ago for farming, then utilized as the pathway for sewer lines 100 years ago, and now currently a sluiceway for urban trash, bodies, and illicit sewage discharges, stretch for dozens if not hundreds of miles in Baltimore alone.  In Maryland, parkland trees are sacred, and so herbicide and management are generally not used.  And why would they be? This landscape of Norway Maples, Chinese Money Trees and Japanese Knotweed are "natural" landscapes, are they not? More importantly, the trees, many of them 80-100 years old now, are falling dramatically with each passing winter, as they are overwhelmed by English Ivy, Japanese Kudzu, Japanese Porcelainberry, and all sorts of other invasive plants that destroy existing trees and prevent young trees from growing at all.   They cover the ground, preventing germination of new native trees, and many invasives exude soil toxins to stop germination as well.  In short, the urban forests are dying now.

The park agencies' absolute failure to protect this thin veil of urban "forest" from complete destruction tends to occur because making the decision over what species to manage or eliminate, at what cost, and toward what end goal, has turned out to be a difficult one.  It's not an easy decision to choose (or engineer) which functions of a highly disturbed ecosystem like an urban valley - or a backyard garden - will be preserved, modified, or eliminated.  However, as the now oft-repeated tale of National Park Service's 12 year delay to make a decision to remove invasive Burmese pythons from the Everglades National Park  shows us clearly, not making a decision about future ecological services of a degrading or degraded habitat is still very much a decision to "engineer" the ecosystem.  Why is this so?

Disequilibrium, a mathematical process documented at many temporal and spatial scales in highly disturbed wildlife habitats, is not a linear process.  In fact, disequilibrium and its partners degradation and entropy may not even be exponential functions, as they tumble out of control toward a dystopian conclusion we've not yet seen in most cases.  Disequilibrium exists because numerous environmental parameters are in decline in the same time and space, while simultaneously, parameters viewed negatively by human society are rising arbitrarily, without controls, and with an unknown end.  Failing to address or engineer this multivariate imbalance is a decision about ecological services, just as much as a decision to somehow intervene in and attempt to "repair" the disequilibrium might be.

Making a preservationist standpoint that a system in spatio-temporal disequilibrium, dissonance, chaos, or entropy (and those things are not the same) can heal itself is a childish idea not rooted in very basic science.  In urban and suburban systems that have lost up to 90% of their biodiversity, are 50-90% paved, feature water pollution deadly to many animals, and are covered with invasive plants from all over the world, there's no real mechanical or structural framework for anything to "heal itself" using natural forces and a perceived advantage of "time, which doesn't cost anything."  If the disequilibrium were to suddenly move in reverse of its own accord (a mathematical impossibility), to what condition would the urban habitat "heal itself?"  The virgin Chestnut-Oak forests of 1606? Swamps thick with Baldcypress and buttonbush?  Above is a picture of a former oak forest that "healed itself" into a 20-year old thicket of sweetgum trees roughly 30 feet tall and two feet apart.  Hint: it's not the same.  It will never grow back into an oak forest, an oak-hickory forest, or even an oak-pine forest.  This forest - its soil, trees, and hydrology - have fundamentally changed from what once was.

Some recent papers have been published in the environmental science world that decry humans' decisions to make land use decisions in urban habitats because they represent "ecological engineering."  Ironically, one such paper was published in the journal of Ecological Engineering.  These papers state that ongoing efforts to "restore" ecosystems in disturbed areas fall short of restoring pre-European colonization ecologies (of which we have no data), and instead, only restore certain ecological services or functions to these landscapes.   Even worse, these writings claim, the ecosystem functions targeted for restoration are human-valued, such as clean water, fish ecology, and migratory birds.  Can you imagine! The horror!

We're led to believe in these articles that the alternative - to "leave nature alone," will magically bring back prehistoric ecosystems in prime health.  Of course, there's little to no evidence of that type of passive restoration working.   They say "stop the source of water pollution - that will save the stream downhill!" as human populations swell and as conventional stormwater techniques are only designed to treat the flows and pollutants carried by the smallest measured storms, not damaging hurricanes or nor'easters.

When did we become afraid of decisions?  When did we become afraid of engineering?  While it's impossible to design our way out of environmental problems we've created without understanding and addressing the cost - that we may, in fact, never fully retrieve what we once had - deciding to preserve a monotypic maple forest with a ditch running through it is an ecological engineering decision.  Soon enough, the maples will fall under the weight of invasive vines, and invasive shrubs and vines underneath will ensure that no new trees grow.   This is ecological engineering.