"Stay home.  Just....stay home."  It's a poorly kept secret that moderation in the outdoors is not my strong suit.  I try to make as many things fit as possible in the very limited amount of time I have.   The problem, that is if you listen to the "doctors" and their "sound medical advice," is that I'm apparently not 24 years old anymore.   Among other things, apparently that means that when I get sick, I am supposed to take time off to recover.  And who has time for such things?

In all seriousness, I took Thanksgiving week off of work to recover after my pneumonia relapsed last weekend.  I got incredibly tired and weak and the blood work told the tale.  I had taken a few short work days, for sure, and I hadn't hunted or fished since my pneumonia diagnosis (though in the three days between my bronchitis and pneumonia diagnosis, truth be told, I bow hunted twice).

I decided to test out the Bear Apprentice II I received last summer.  It's a "large youth" bow, perhaps a womens bow as well.  With adjustable pull up to 50lb and a pull of 27" (my draw is 27.5"), I figured I could enjoy it until young Hank gets strong enough to use it in another several years.  And it weighs three pounds.  A three pound compound bow!  Once I have more time with it, I'll be posting a review.

I bundled up, and keeping with doctor's orders, stood in our kitchen doorway (one floor above ground) and took shots at a target block.   I wasn't technically outside.

But the testing had to start somewhere...first shots, bow out of the box: 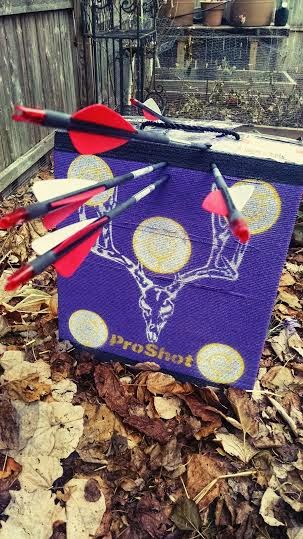 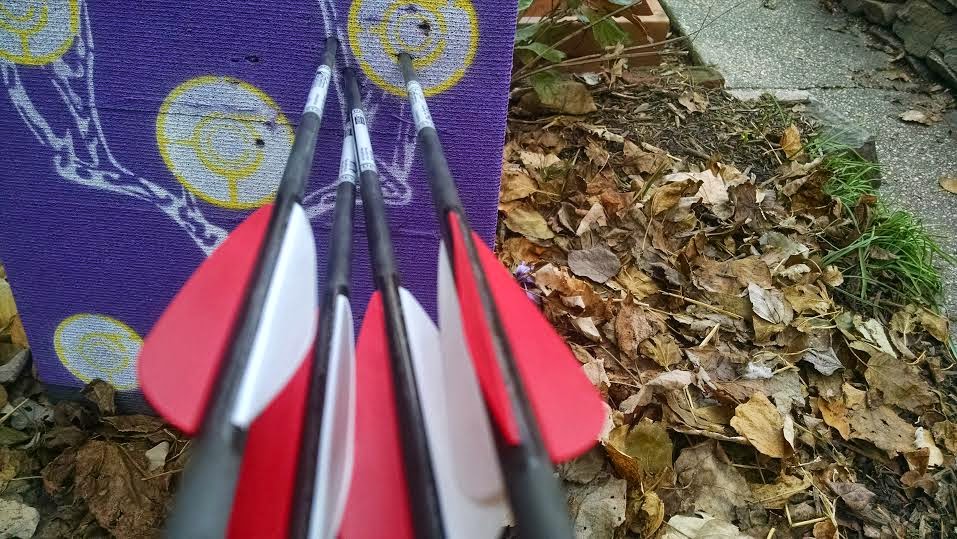 Unfortunately, I was still aiming at the center target....more adjustments.... 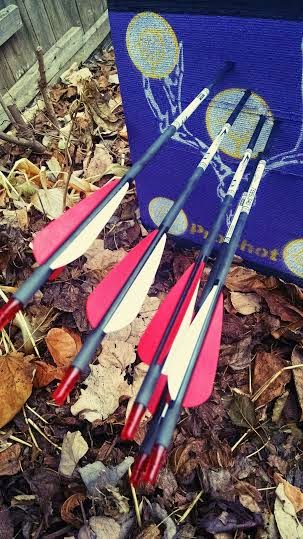 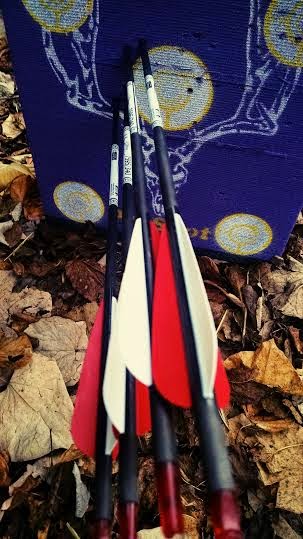 Hooray!  At this point, I'm two inches left of target @ 10 yards. I think the vertical is correct, but my arm was getting a bit tired, so I think my shooting was a touch sloppy.  Two inches wouldn't be a huge deal except that it can make the difference between hitting the shoulder blade of a deer and hitting the lung.  I've closely tuned the bow enough to be afraid of undoing my work with the slip of a wrench.   Guess we'll see...but for now, it's back to the couch.  More bed rest.
at November 28, 2014 No comments: 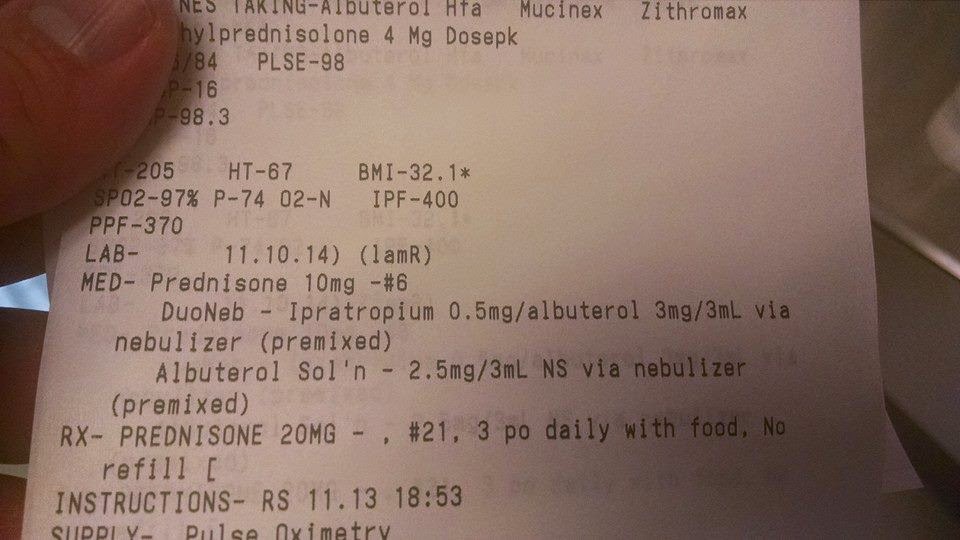 "So tell me, what do you do for asthma treatment?"

"You've had bronchitis for the past five Novembers, and this is your second go-around with pneumonia in that time.  You have asthma."

One of my first memories of my life was lying in the hospital with pneumonia.  I was five.   I remember how horrible the TV shows (tiny TV mounted near the ceiling) and the food (cheap jello....barf) were.  It was 1979 and those facts haven't changed since.

I've had bronchitis at least once a year since that time, and haven't thought too much of it.  Guess the doctors haven't, either.  I was hospitalized with pneumonia again at age 22 (no insurance).  I nearly had to drop out of grad school the following year (no insurance) when my bronchitis finally beat my pride, and I went and got free antibiotics from the school clinic.  24 was a good run, near the end of which I got real health insurance and promptly got really sick with bronchitis.

Now I'm 40 and being sick for weeks on end seems less noble.  In a thoughtful turn from the standard spousal speech on my health, my wife correctly noted that this continued pattern is doubly related to the outdoors - when I first get sick, I keep going out in the woods and the water, probably compromising any slight possibility of healing myself due to.....whatever defect I have.  Then once I get really sick, I'm out of commission for solid chunks of our fairly long hunting season.  I hadn't really tied those two together.  But here we are.  It's duck season, and it will be 35 and raining tomorrow - perfect weather for ducks.  I won't be out there.

Talk to you all soon, after I schedule something called a Comprehensive Pulmonary Function Test. Can't wait. 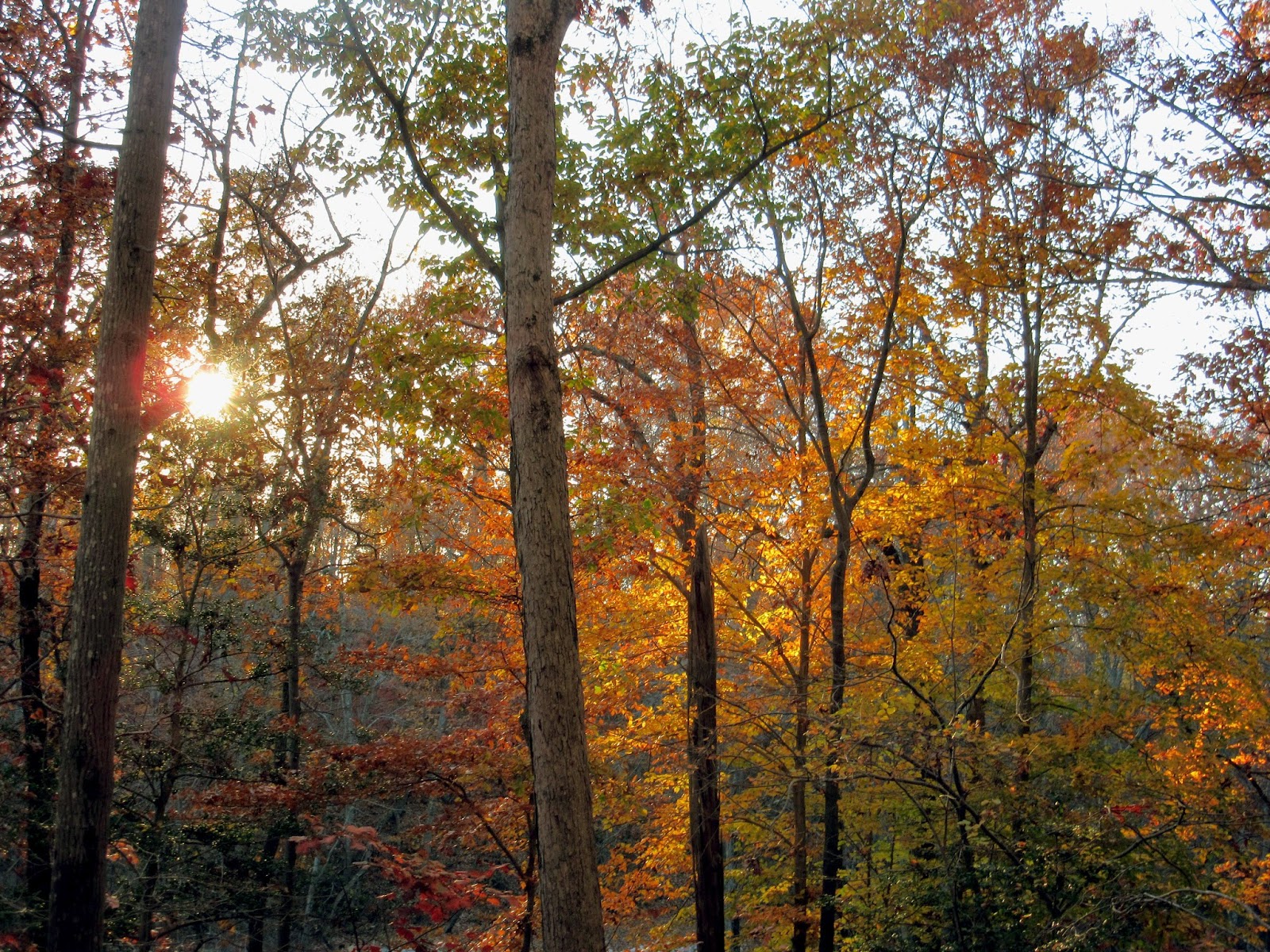 I hadn't missed a bow shot on a deer in a few years.  Hadn't.  I am conservative with my shots, leaving the absolute minimum variables to chance.   Which is interesting (as I edit this text), because I am more of an aggressive tactician in other parts of my life.

I had the animal I wanted at less than 10 yards.  I was in the shadows of dusk, dressed in black, unseen.  I had time to exhale, inhale, and exhale again.  But the shot was not true.

This is the heartbreak of the hunt.  When there are no more things to blame, no more uncooperative universal forces in your way, when you've practiced and prepared and are fully paying attention, sometimes you still fail.

I wanted to close the book on bow hunting this spot for this fall.  I'll return.
at November 14, 2014 No comments: 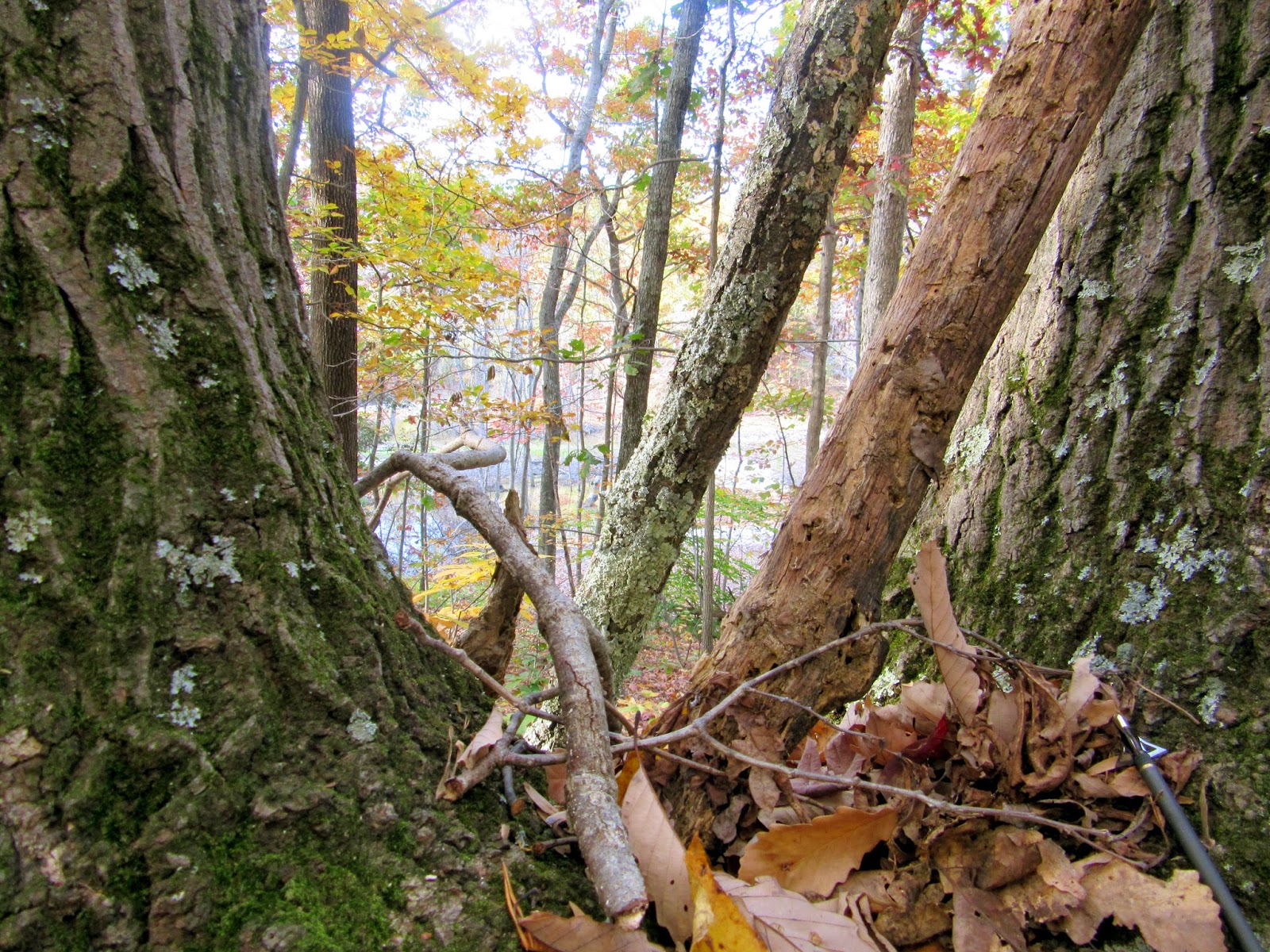 In urban bow hunting, I'm not sure that luck exists.  Deer exist where they can, using carefully prescribed pathways under heavy cover, usually exotic vines, to slink between food sources, water, and their bedding area.  The paths vary seasonally, but within a hunting season, it remains consistent.

The urban deer highway I've been hunting this fall is one I identified while bowhunting on a sandy blufff on the opposite edge of the swamp last October.   The only "luck" involved is that I'm "lucky" to have access to both sides, privately owned and completely posted.   I keep getting closer.

During my first hunt this season, I hunted at a pinch point in the swamp but downhill of the deer highway.  Not surprisingly, no deer crossed the pinch point during my hunt, but dozens crossed above me on the slope.

During my second hunt, I hunted upslope of the highway, but 100+ yards from the pinch point, which gave me an excellent view of a 6-8 point buck crossing the pinch point, right past the first hide I'd used - within 2 yards of it, in fact.  So I moved to the pinch point, at which time the 6-8 point buck started feeding under a white oak 4 yards from the hide I'd been sitting at.   I waited for a clear shot at about 20 yards from my awkward stump hide, and at the exact moment I had that shot lined up, a spike buck walked in front of the larger deer, while the larger one sauntered off, away from me.

During my third hunt, I returned to the same hide above the deer highway, committed to stay there, which I did.  The winds blew in a favorable direction, but at 25+ mph, which I believe kept the deer bedded down.  Around 830am, two does crossed the swamp's pinch point and angled toward me, a small ridge hiding them in the shadows in front of me, less than 60 yards away.   One doe disappeared, while the other came toward me in the shadow of another tree, just 8 yards from my position.  She arrived at the base of the tree, turned, and in one motion, walked back in the shadow of that tree, away from me.  I saw her entire brown flank for less than a second, well within killing distance.

This is an interesting juncture for me.  As someone who prefers the more social aspects of bird hunting to the solitary focus of deer hunting, my patience for chasing these city deer is beginning to run thin.  Plus, duck season is now in - and goose season will follow in another two weeks.  Statistics are that even in these deer-thick areas, bowhunters are successful less than 25% of the time.  I'm running right up against that statistic, and like many hunters in the same pattern, I feel as if I am a champion deer watcher.

I have abandoned my very able Fred Bear compound bow for my crossbow - the crossbow does not miss at 20 yards.  Ever.  I am ready to kill a deer, perhaps kill another soon after it, and say good riddance to these animals for another 11 months.   Most dedicated bowhunters have now taken an animal, as the rut started four days ago.  Will I make my fourth trip count? 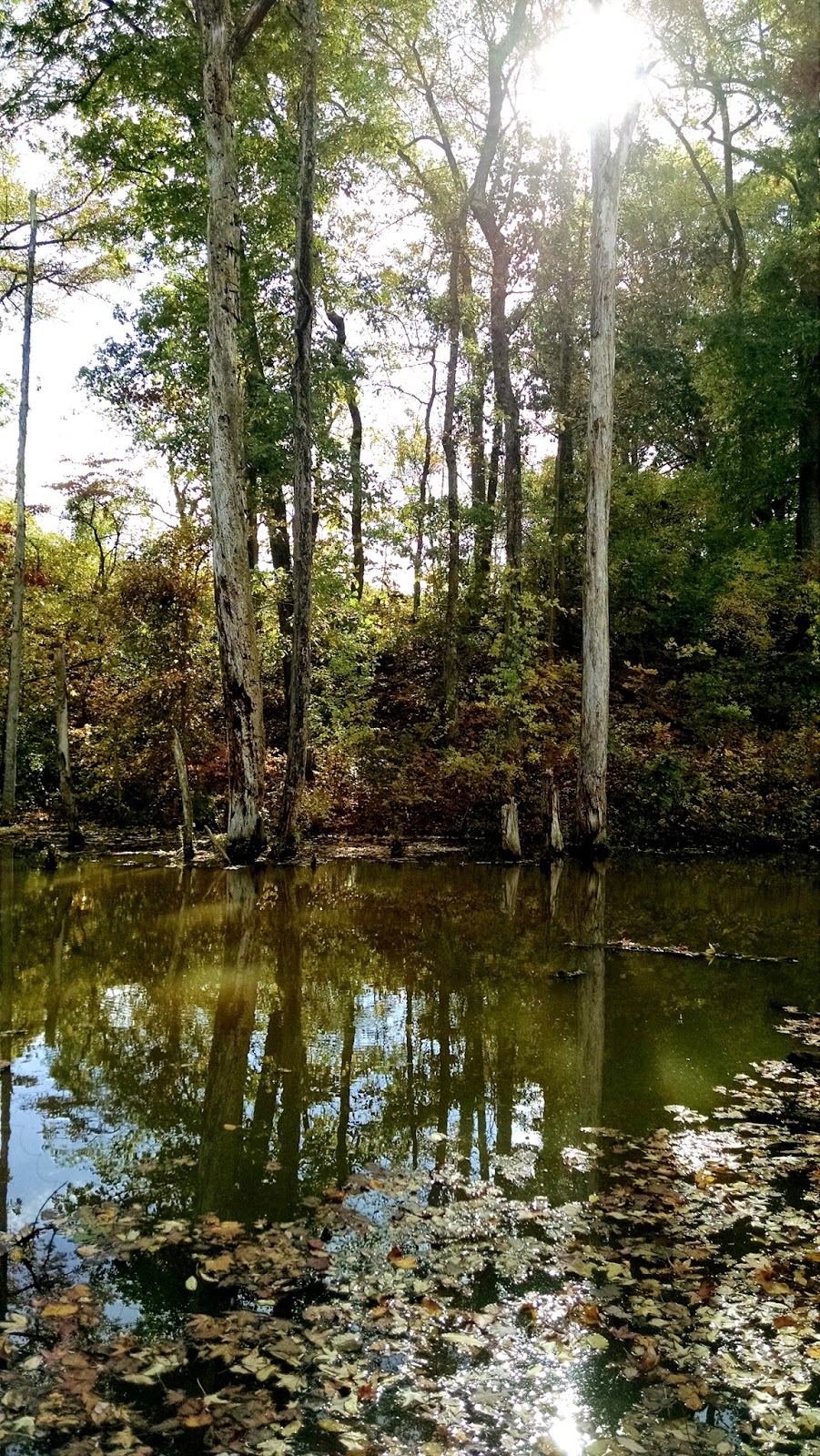 I didn't have much time to fish, but I went anyway.  We have had a series of huge storms in 2014, and water quality is worse than usual.  The fish seemed to notice, as I looked for them on a day when the previous two days had seen not only a flash flood, but 39 degree air temperatures.  The warmwater fish might be done, it seems.

I tried everything, to no avail.  I found my thoughts wandering to hunting, and then to work tasks, and eventually packed it up and went back to work.

A few more days on saltwater and some effort towards trout might be about all I have left in me for 2014.  Hoping for some tighter lines in 2015!
at November 03, 2014 No comments: