We enjoyed a suburban duck blind for the better part of a decade - fifth generation landowner and all.  The blind was a spot for tall tales and occasionally good hunting, and many, many sad stories about how healthy the Chesapeake Bay once was.  Two years ago. some rich folks bought part of the peninsula and it just so happens that their McMansion is fifty feet above the duckblind and 124 yards away from it.  We tried to make peace with them, possibly negotiating for later shooting times on certain days to not wake the lady of the home, and things of that sort.  The duck blind, as it was, could only be used to shoot away from their house, making a minimal acoustic footprint for those folks.  They wanted none of it, believing that they could force the 5th generation landowner off of the property if they could get our duck blind deemed "illegal."  You see, it's illegal to have a duck blind within 150 yards of an occupied dwelling without that occupant's written permission.

Well, they did just that (had our blind deemed "illegal"), except the landowner retained his duck blind license.  So we built the USS Thunder Island, a 15' x 15' pontoon duck blind that works as a jonboat-driven barge, and used the existing duck blind license to park the new blind 151.5 yards from the neighbor's shoreline (an even more conservative placement method, to ensure we stayed legal).  Now we can shoot ducks that fly between the duck blind and the McMansion, which I imagine is pretty loud.    We also installed a solar power navigation beacon on top of the blind (for safety's sake), which unfortunately blinks at the McMansion every six seconds, 24 hours per day.  Here's what they now see when they look over their majestic, million dollar waterfront (the former shoreline blind was invisible to them). 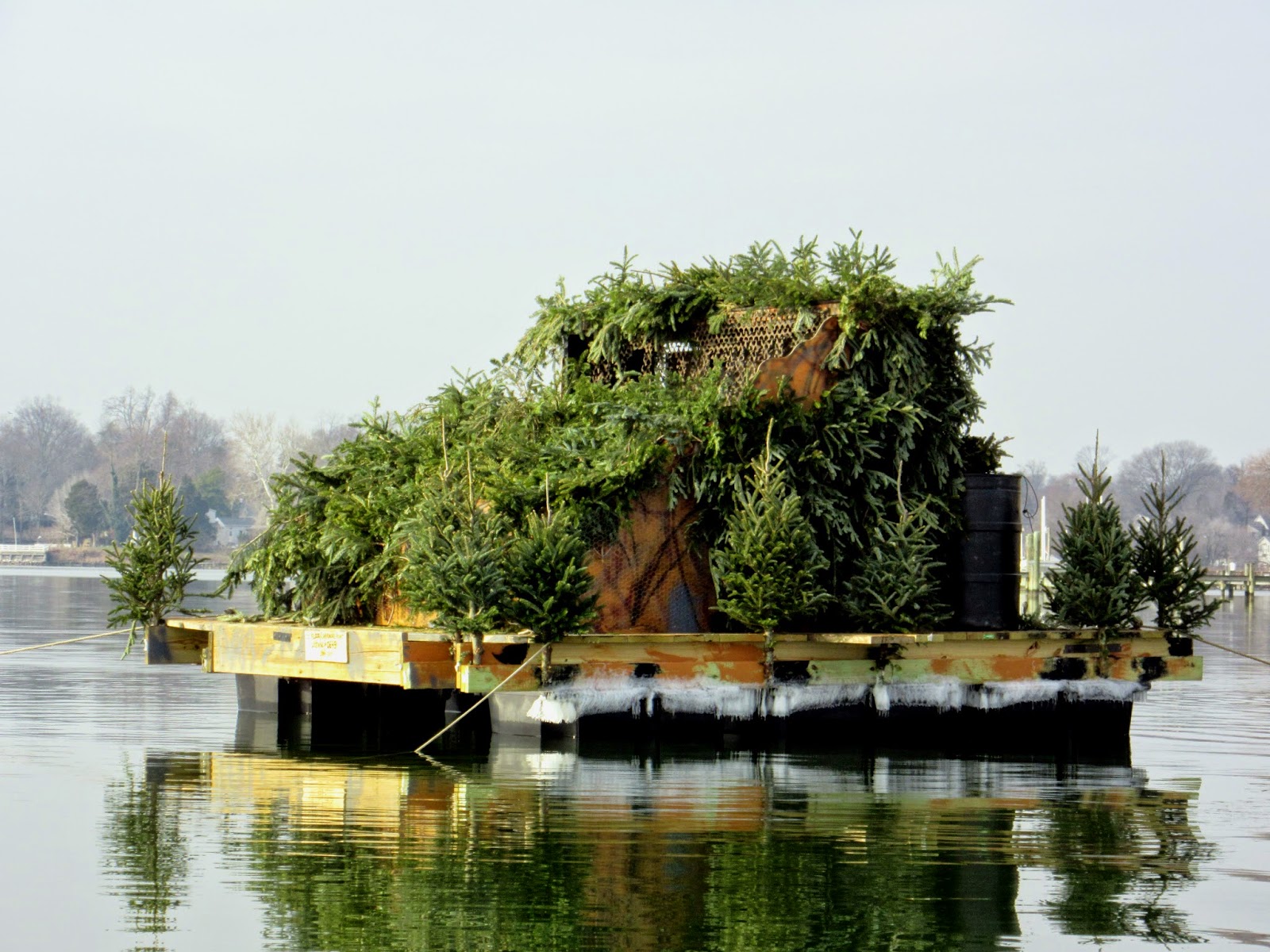 On a balmy January day I got to enjoy my first hunt on Thunder Island.  A few fat mallards lazed about but didn't move offshore towards us.  The game warden, who checked the blind and hunters during the USS Thunder Island's first five hunts, sped by and waved from her boat.   The geese and diving ducks, our intended prey, stayed out at the rivermouth, not needing to aggressively feed in creeks like ours.   We talked about the coming end of the season, my recent trip to Florida, and work plans for 2015.  It should be a good year.

I thought I was reading The Onion for a sec ...

It's relatively ridiculous. I admit.

It's relatively cool is what it is. Boys have their treehouses, men have their duck blinds...

What you say is true!