Last week, I attended the Maryland Hunting Coalition's "Blaze and Camo Day," where about 100 hunters from mountain hollers and big cities; black, white, and Hispanic, Democrat and Republican, showed up to thank Maryland lawmakers for considering the huge positive impact that recreational hunting has on the state budget, to say nothing of the state's economy.    We also sought to show our opponents (namely, anti-hunters) that we intend to have a presence in the legislature.  Time will tell if our signal was received.   Although this was not my first time engaging in this daring act of...well...being a responsible citizen, I learned a lot, including:

1.  Hunting and fishing hold a special place in the hearts of a surprising number of Americans.   Though it was bitterly cold outside as we greeted lawmakers, you could their eyes light up when they saw the small army of camo and blaze orange.  Many of them couldn't get a commemorative blaze orange hat from us (thanks Bass Pro Shops!) fast enough.   Being politicians, they quickly launched into why they loved hunting, and their favorite hunting memories.  Being politicians, they then were quick to announce which pro-hunting bills they were sponsoring, loudly endorsing, or in many cases, quietly endorsing. You couldn't have predicted which lawmakers would initiate these conversations - black and white, rural and urban.  Just like the advocates attending our rally.  It was great to see.

2.   When you establish a political presence, lawmakers will take interest.   Several non-hunting Delegates stopped by to ask us about hunting, pending legislation, and our opinions on a wide range of topics (water quality, land protection, etc).  They were very open and one even said, "I know nothing about what you guys do.  Tell me about it."   I don't expect that these folks will sponsor pro-hunting legislation, and may not even vote for pro-hunting legislation, but when the debates on hunting policy arise, they will remember their time with us as very rational, civil, and engaged taxpayers.   That memory won't jibe with the anti-hunters' claims that hunters are drunken, angry fools who habitually break the law and try to hurt other people.

3.  I learned about pending laws I wouldn't have known about.   The Hunting Coalition is pretty strongly focused on a few major bills for the 2015 session, however there's interesting pending legislation across the state that at a minimum, could set good or bad precedent for more local issues to where I hunt and fish.

4.  I can definitely tell a lobbyist in a crowd.   Almost none of the hunting and fishing lobbyists can actually identify me in a crowd.  That's good and bad.  However, they're easy to spot.  First, they have the best clothes and perfect hair.  Even in camo, the lobbyists wear high-end, locally branded clothes (Under Armour's headquarters are about 20 miles from the State house).   Some firearm lobbyists stopped by, and they looked like consummate professionals.  Truth be told, they looked like catalog models.

Most notable about the lobbyists is that the lawmakers recognize them and pursue them.   It seems peculiar, but obviously there are long term relationships there and mutual benefits.  The ease with which the lobbyists can connect lawmakers in a crowd with advocates in their district is worth watching.  It is very high skilled people management, and obviously we hope it turns into effective representation of local voters in legislation.  The benefit of visiting your state capitol with a lobbyist is that he/she has the skills and relationships to actually get you into a meeting with your local elected officials, and to set up a meaningful (if short) conversation with people of great influence.   This is a benefit, and arguably a responsibility, of American citizenship.

5.  Finally, I learned that some lawmakers don't want to listen.   When I first got involved in "engagement" at the state level (in Maryland) two years ago, I was shocked and depressed to see how many of my phone calls and e-mails (100%, actually) to my Baltimore delegates went ignored.   Their lack of interest showed me that they don't believe that they represent me.  And so I stopped voting for them, and contributed to their political opponents instead in 2014.

And while our crowd in Annapolis was black and white, and included several City voters and City business owners, to say nothing of a good number of Democrats, the entire Baltimore City delegation (all Democrats) chose to take the "emergency tunnel" underneath the courtyard where we were standing, rather than having to even walk past us.  Let alone talk to us.   So much for representative government.   Rather than dwell on that ridiculous reality, I'll focus my memories from the day on the positive engagements with pro-hunting, non-hunting, and even some anti-hunting elected officials who cared to stop and talk to us, figure out why we care, and better understand their voters.

If you can take a day this spring to visit your elected official in Annapolis, or Raleigh, or Richmond, or Harrisburg, I highly recommend it.  You'll be pleasantly surprised at the attitudes and interest level of some lawmakers and their staff, and in other cases, your suspicions about certain lawmakers will be confirmed.  I encourage you to take a day, pack a lunch, and go downtown.  See you there! 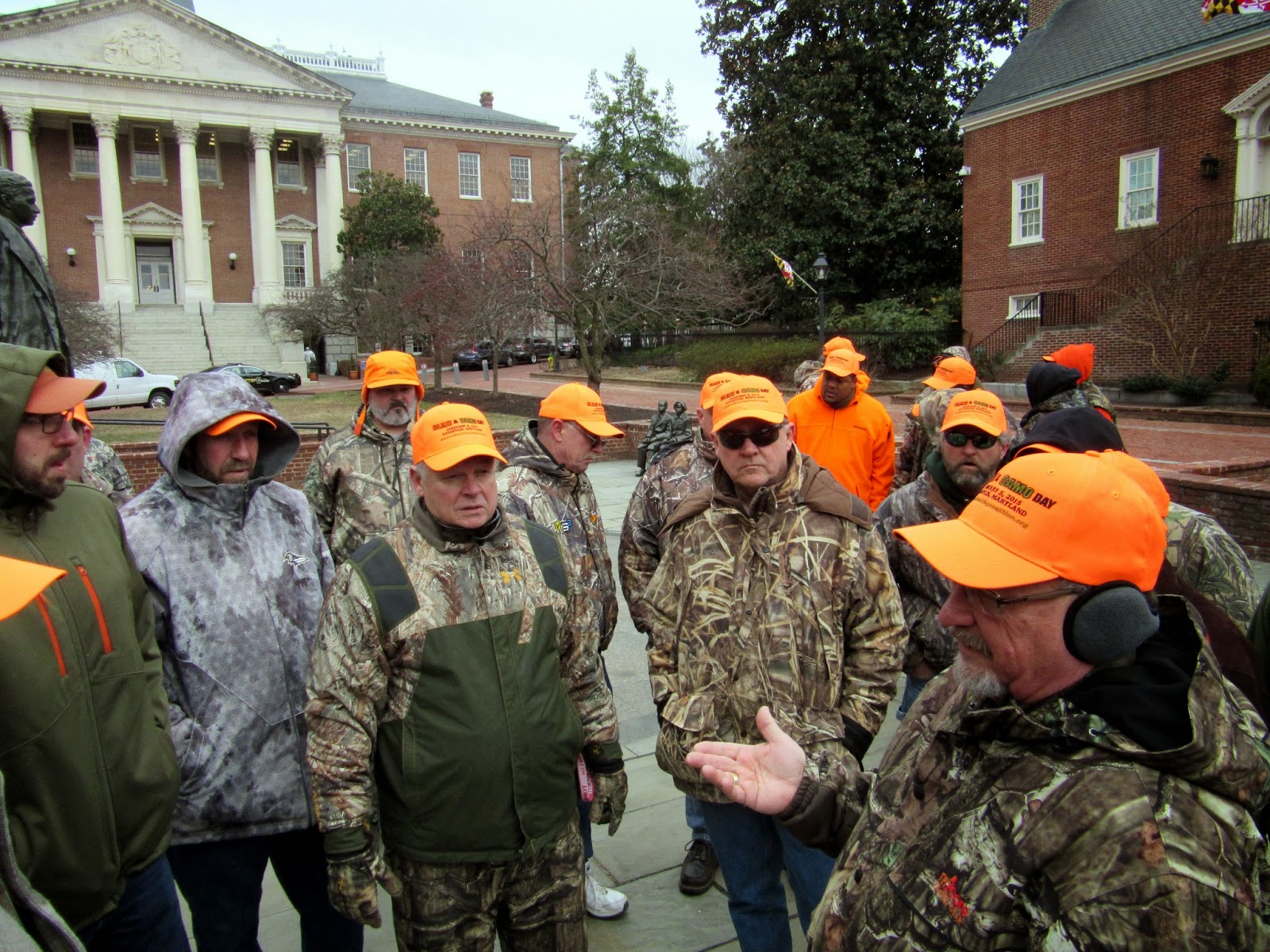