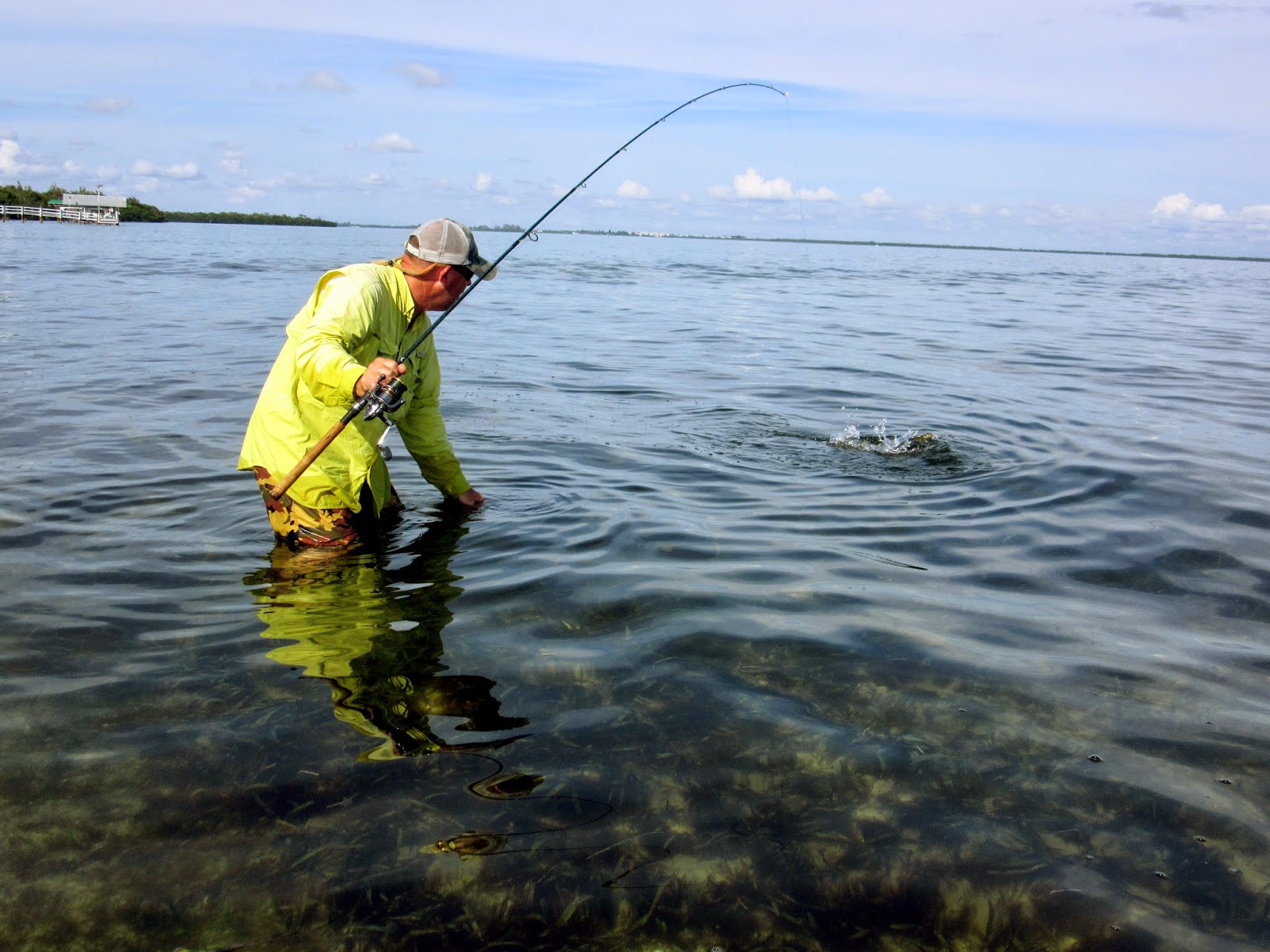 Capt. David Martin is a guy after my own heart - he does too much stuff.  Inbetween outdoor and survival writing, instructing NRA courses, and supporting his son (a USMC officer), Dave gets around to guiding fishing trips sometimes.   We almost didn't get together.  Our first call was across the Pacific Ocean as we tried to set trip dates, and left it vague.   When Dave returned, severely jetlagged, he said the words that are (to me) like manna from Heaven when a guide speaks them,  "Hey, if you don't mind, can we put this trip off one extra day to make sure I've got everything perfectly scouted? I want to make sure you have a great trip."

That was a great way to start, but again, it almost didn't happen.  On his way to meet me, Dave was rear ended at 75mph on the interstate by a driver who had fallen asleep at the wheel.  We lost some time there.....but no major issue.  We unloaded the yaks on Boca Grande (Gasparilla Island) and talked about my goals for the trip - I wanted to learn the water and catch a few fish.   As we were prepping gear, Dave threw out a line into the morning fog and gave me the line.  As he was passing it, a fish hit the lure and I retrieved the fish with very little run on the drag....my first Permit!  Of course, my camera was packed up in the kayak next to me...so no photo.  When I threw it back in the water, a great blue heron appeared out of nowhere and nearly snatched the fish before the fish dove out of sight.  Interesting. 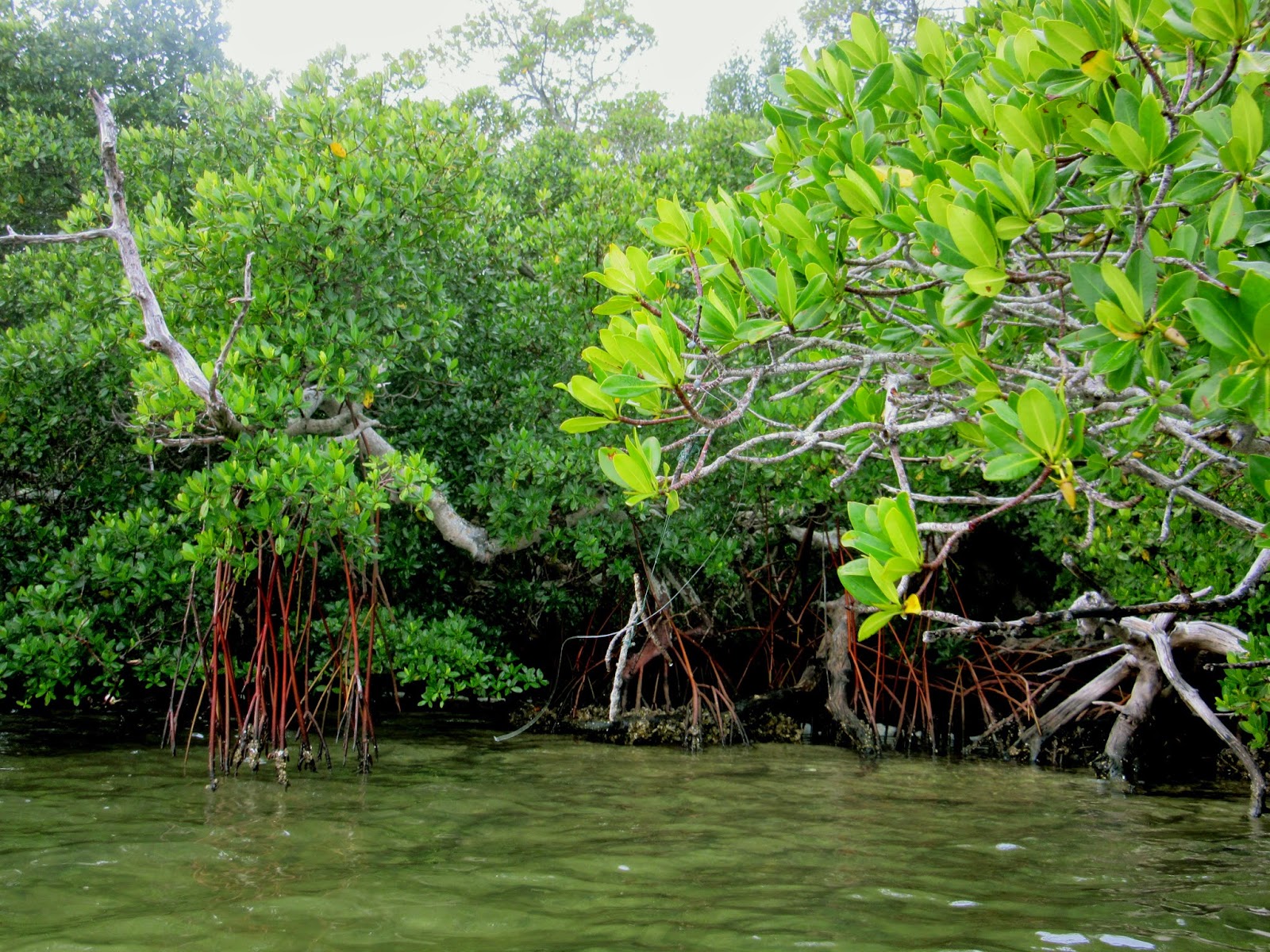 We set out around the mangroves of Boca Grande Pass.  It was astonishingly beautiful.  Clear water with about 80% seagrass cover.   About 20 minutes into our paddle, I wondered why we didn't see fish.   Dave pointed at a mangrove island in the fog, "That's our redfish spot."   As if on command, a pod of dolphins emerged right in front of the island and started flapping furiously.  Dave's paddling didn't break stride, "And there went our redfish."    I started to realize that we were seriously competing with other predators for these fish.

We ended up on an open pass with several "bowls" of unvegetated sand in about eight feet of water.  We fished for about an hour with no bites, and honestly, my arm started to hurt from the constant long-distance casting.   I started to second-guess my "artificial lures only" attitude, thinking that we'd probably be overrun with biting fish in this lush habitat, if only we were using live, stinky, twitchy bait.   But....that decision had come and gone.  No live, dead, or cut bait today. 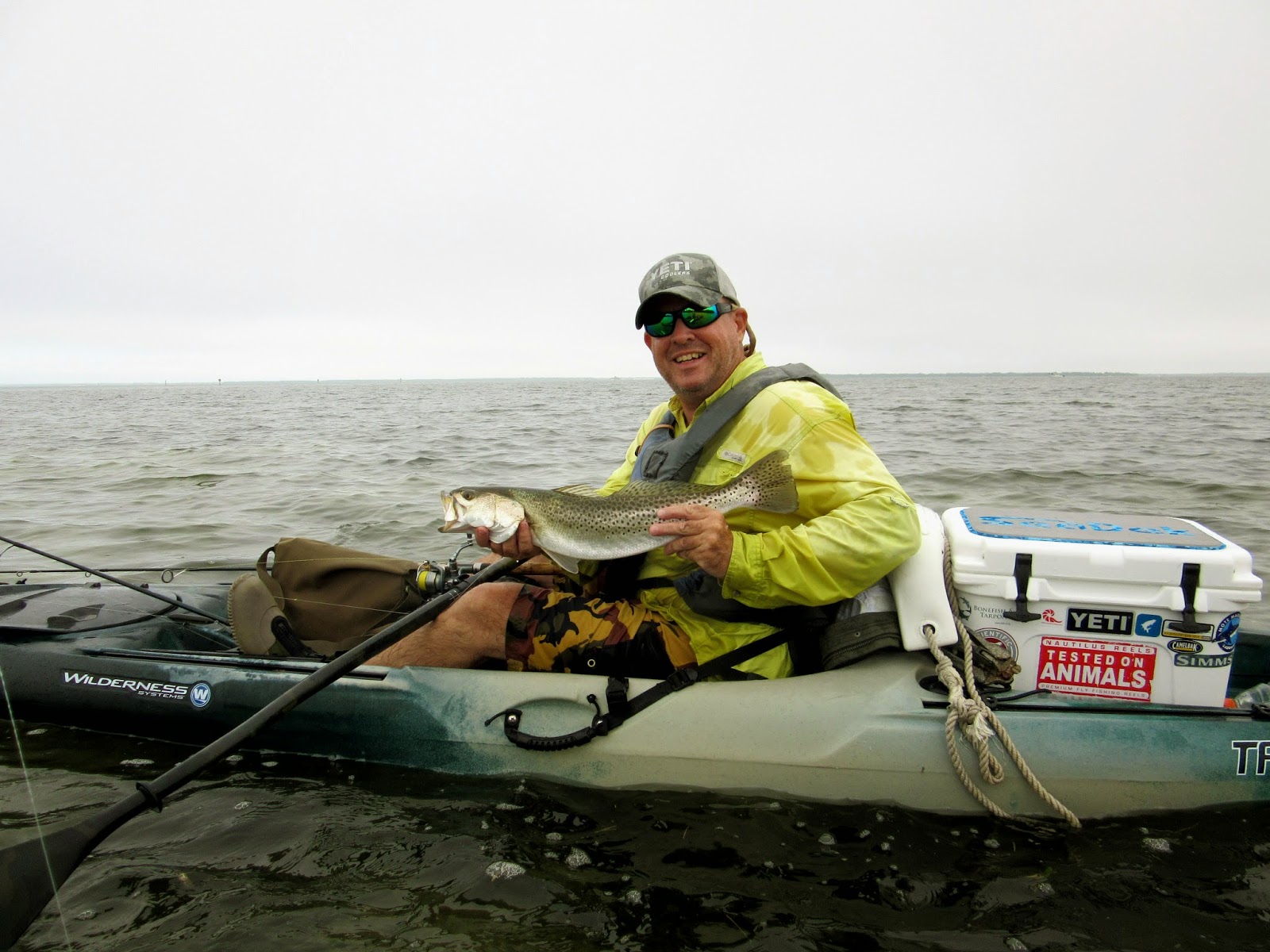 Finally, Dave lit into a decent speckled trout.  And three more on the next three casts.  He let me maneuver my boat into his spot and try it - I lost the tail of a lure, but failed to hook the fish.  The fog started to lift and doubt started to creep in - would this be the fishing day I hoped for?  The wind started to pick up and so we started alternating long paddles and drifts across the open water between two points near a dredged channel.  Finally, no fishing guide in sight, I picked out what I thought was a good hole in front of me based only on how the waves moved over top of it...and boom! First cast...16" speckled trout.  Now I really felt like I was on the board, with a permit and a trout.  I told Dave I was sick of getting pushed around in the wind and we moved onto the leeward side of another mangrove island. 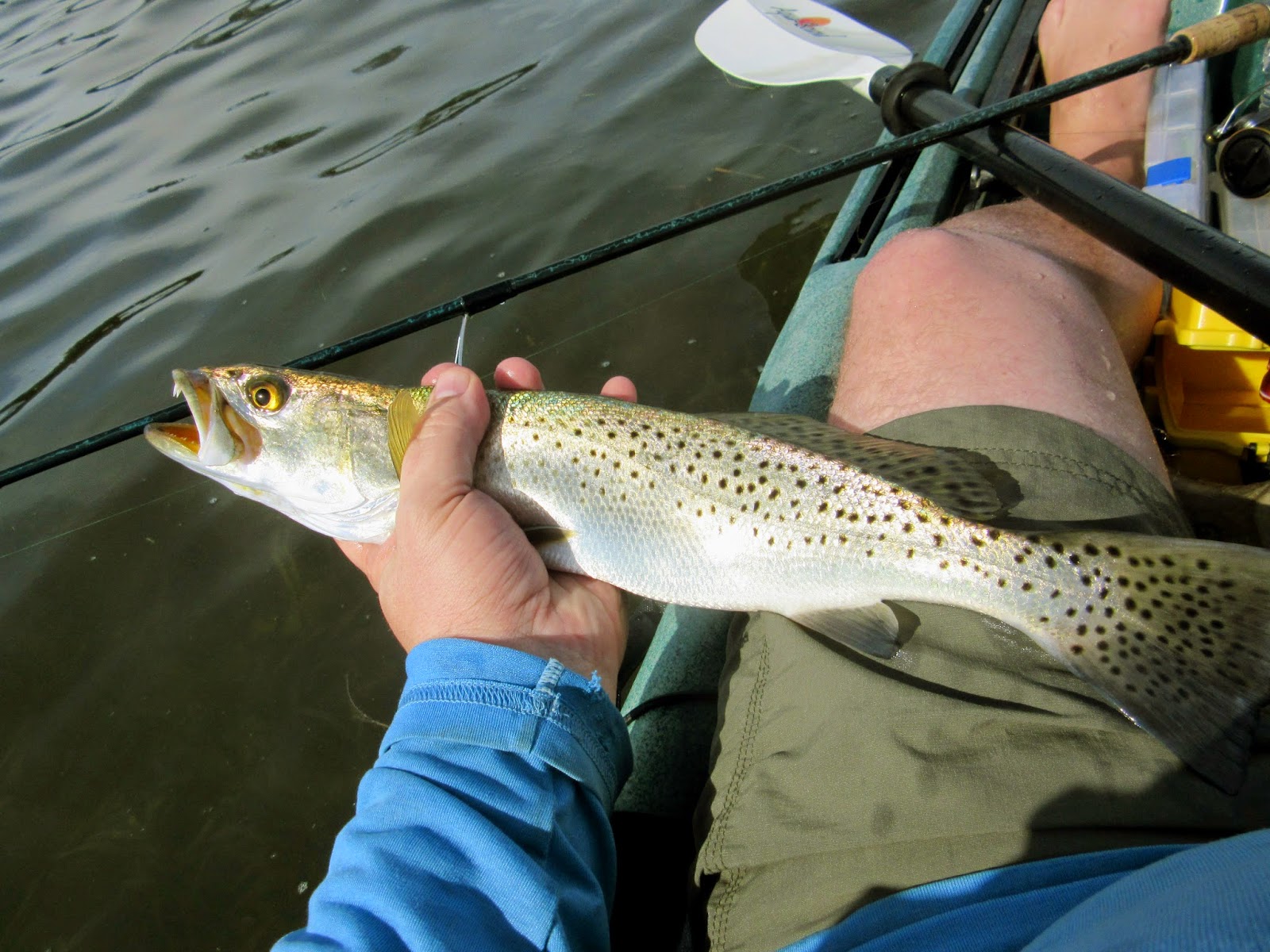 The water on the leeward side was gin clear and warm - a strange combination for this east coaster.  Little grass existed here, but large mullet, some well over a foot long, ran in diagonal patterns away from my boat.  I looked for the telltale shadows of spooked redfish and saw none.   After a quick pow wow with Dave, we paddled around to the windward side and took lunch.  The area featured an amazing flooded beach full of live conchs scooting around.  Near sea urchins.  And sting rays.  Ouch.  The water 20 yards out was thick in turtlegrass and also less than waist deep.  Given the lack of fish on the leeward side, I figured that there was no way that fish would be sitting in the waving seagrass on the windward side.   I was wrong. 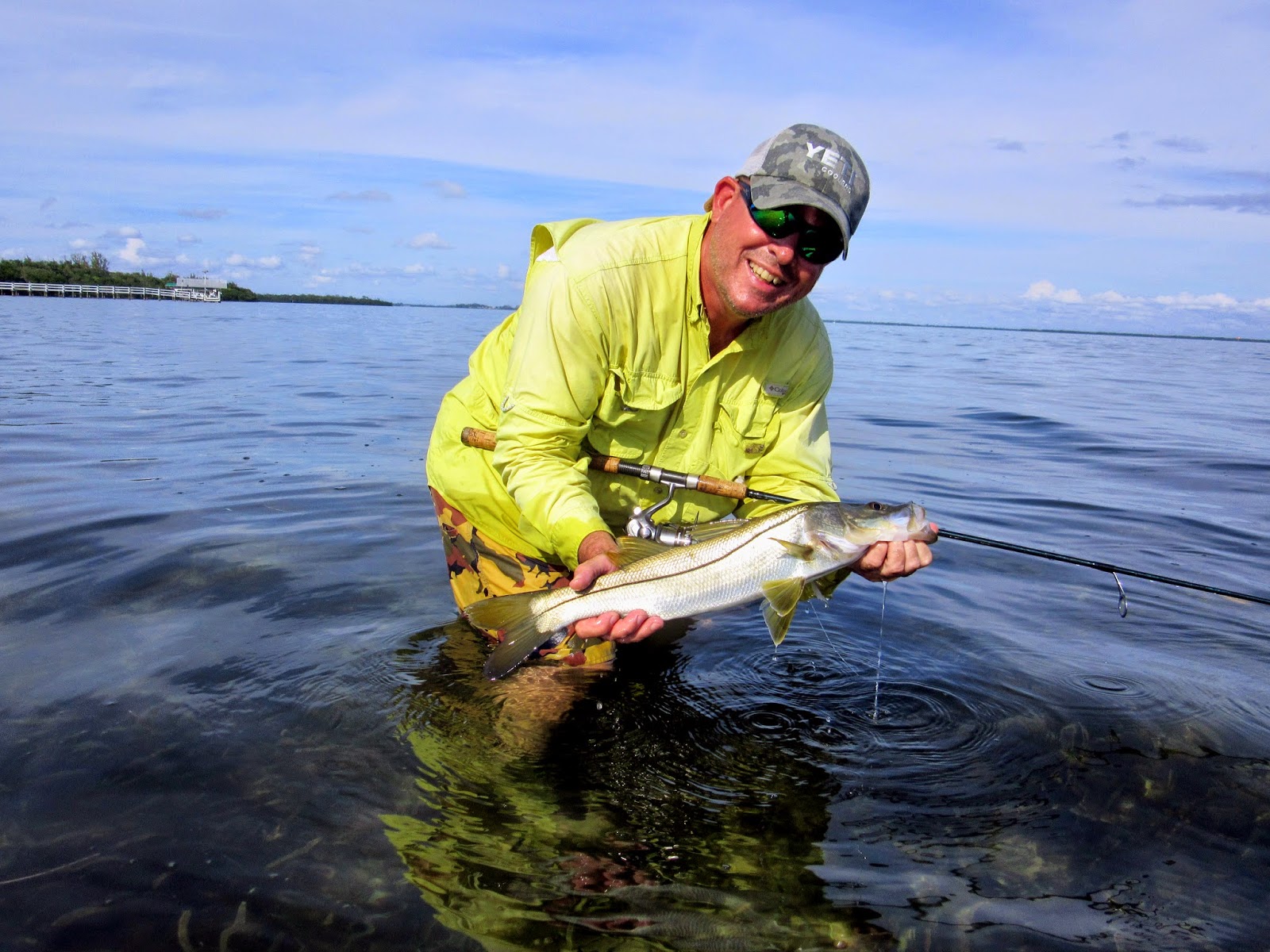 What followed was the most fun 30 minutes of fishing I've had in the last 18 months or more.  Snook and redfish were mauling our lures much like bluefish do in the Atlantic.  Lots of short strikes! We finally started landing fish, and as if it were an omen, the bite immediately stopped when Dave had prepped and queued his GoPro camera to his forehead.  Thanks, Dave.

At that point we had been out for five hours and I decided to call it.  We enjoyed a steady paddle back to the launch over clear, azur water.  Sheepshead had moved into the shallows and were zipping about. At the launch, we figured out that we had not closed the van doors tight, and Dave's battery died.  With my wife in the truck on the island already, we attempted but failed to charge him up.  We left poor Dave there, awaiting a new battery from the auto supply store on the mainland.  What a trooper.  What a day he had.

At the top of my list for our next trip to Florida will be another fishing day with Capt. Dave Martin.   Can't wait! 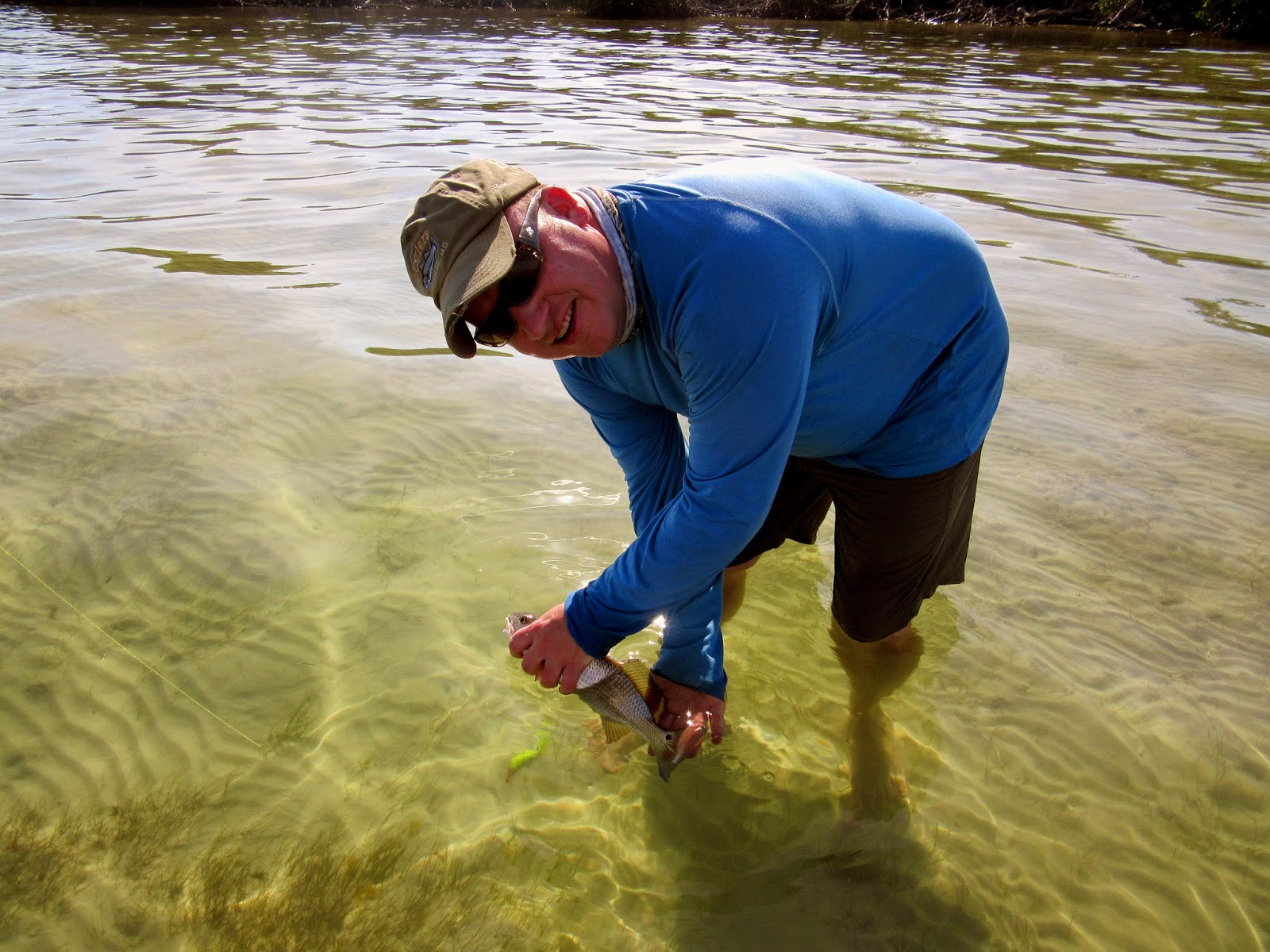 Looks like an awesome time and on a kayak no less. Tight lines and congratulations!