I grew up in a pretty bucolic spot on the earth, though if I were to describe it, it would sound a lot like a swamp.   It was the kind of place where children used to, and still go to school based on whatever public school district overlays their home.  To be sure, there is gamesmanship in the real estate industry based upon this reality.

But we live in Baltimore, Maryland.  One year's worth of Baltimore murders: 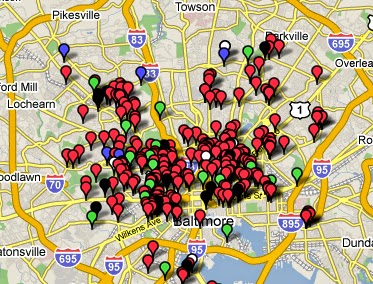 The public school for which we're districted for commands a lofty "3/10" rating on greatschools.org, but perhaps more disturbing is that two drug dealers dueled it out in broad day light recently on the school grounds; one was killed.   Charter schools exist but are unpredictable in every way, including "making the budget" and "paying the teachers ontime."   Long lists of politically active parents exist for every "good" public school in the City, which after all, are just "passable" public schools by my generation's standards of public schools (roughly 65% graduate, 40% college acceptance).

That leaves private school.  Baltimore has a long history of prestigious "independent" day schooling, much in the way that Philadelphia has a long history of prestigious boarding schools.   And while those schools are not diverse socioeconomically, they are certainly racially diverse, and almost all of them command 100% graduation rates and 95-100% college acceptance rates.  What do you pay for that?  Somewhere between "a good chunk" and "a fortune."   The price range is from $7500/year to $22,000/year.  For kindergarten.  There is no mathematical scenario that involves us being able to pay more than $9000/year, at least in the next two years.   High school prices are higher:  $17,000 - $27,000 per year.  Luckily, we are eligible for financial aid.  For kindergarten. In fact, one school's admissions staff did not believe that we could possibly have salaries as low as we do (our salaries are quite normal), and demanded to see copies of our pay stubs.  This could be a long 13 years.

We have visited several schools, filled out extensive application and financial aid forms (remember:  this is Kindergarten), watched our son be evaluated for his "fit" into the academic program of several schools (he usually tells stories about how our dog is dead, or how my stomach is ginormous because I make bad food choices....so I'm sure a scholarship will be forthcoming!), and in two cases, sat through parental interviews as well.   We initially looked at five schools, and applied to three.

On February 20, all Baltimore private schools release their acceptance letters to potential students.  I call this Kindergarten Signing Day, just to make it sound more ridiculous than it is. These letters include final offers of financial aid (or lack thereof).   By March 10, we'll have to choose and send in a hefty deposit on next year's tuition.   Having come from a rural public school background, this is all very stressful.  My reality was that you live somewhere, the schoolbus shows up, you get on, and it takes you to a school.  This reality is very different - private schools are jostling for "the best" students, and jostling for money.  They're (and we're) concerned about "fit" and whether the "culture" is the best for our son.   The level of thought is like what I experienced in choosing a college.  But this is kindergarten.

This is kindergarten.   Where, depending on what happens in the next 10 days, he may set upon a path towards Catholic high school and college.   Or he may choose a different route, inexorably leading him to explore his love of robots and technology.  Or he may end up at a school that propels him into an ivy league college (that we also cannot afford).

It is hard to know what we'll do, when we don't yet know what the true choices are (a tuition bill for $21,000 kindergarten is not a real choice, based upon our income).   It is also very worrisome to consider the possibility of making "the wrong choice."  Since I have never sent a child to grade school, I don't know what "the wrong choice" even means.

So, very soon, February 20th will arrive, and with it, feverish phone calls from private school admissions officers trying to seal the deal with our son, and lock us into what they hope is a 13 year commitment to Hank's education and a longer commitment to charitable giving to the school.   What will the choices be?  It's hard to tell.

We'll have to wait until Kindergarten Signing Day to find out.

Might I suggest moving? To Queen Anne's County? Great schools!

The wife is vested 15 years into county government, 1.5 miles from our house. So, done deal on that one.

"And while those [private] schools are not diverse socioeconomically, they are certainly racially diverse ..."

this must be a typo ... i'm not sure anyone ever in the history of mankind has described Baltimore area private schools as "racially diverse" ... it's just not true.

you live within spitting distance of the city/county line and EXCELLENT public schools yet post regularly about your gripes with your neighborhhod, the city, and it's public schools.

it seems to me your real problem is your choice of real estate ... move (literally a THIRD OF A MILE AWAY) and these problems you so often cite go away ...