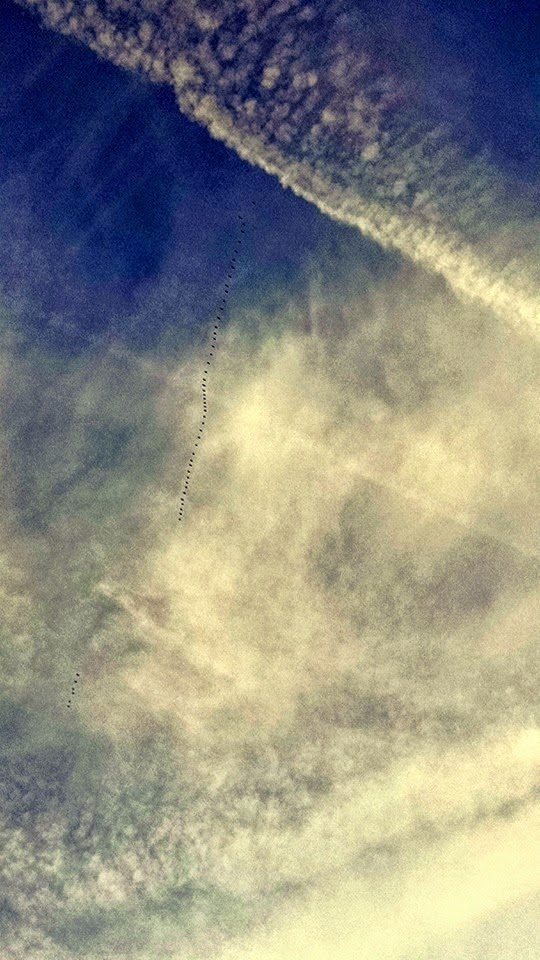 The hundreds of thousands of Canada Geese who spend the winter on Maryland's shorelines (and golf courses, and corn fields) are headed north.  Reports came last week that big flocks were acting "nervous," and then on Monday morning, I took this picture from my front steps - high flyers headed north to northern Quebec to find nesting habitat near the Arctic Circle.

For the last two days, I've watched strings of birds much larger than the one in this picture get up off of the fields they've been loafing in since November, and push into blustery north winds.   Off to Quebec, against the wind.

But what's important to remember is that those birds have no idea what kind of conditions await them in northern Quebec.  Some years, the birds arrive en masse, only to find the nesting grounds (and food sources) covered in three feet of snow.    The geese literally stand around, starving, slowly being picked off by predators.   And if they nest late and their eggs or goslings are eaten - as happens sometimes - there will not be enough time to mate, lay, and raise another clutch of eggs.  The nesting year suddenly ends.

Why? Well, goose eggs gestate for a month.  Goslings (in the Atlantic Population) take about 70 days to fledge feathers, and only six weeks later, it may be time to head south for winter once again. In some years, even a one week delay in nesting results in significantly poor reproduction.

From the goose perspective, it is a daunting task and a daring risk.  Every year, their bodies tell them it is time to leave the Chesapeake Bay, and they do not wait.   Without hesitation for what lies 1,400 miles to the north, they move, steadfast in their quest and unapologetic for what disasters or problems they may stumble into with their mates.  It's not necessarily quixotic - about one in four goslings will make their first flight south for the winter.  And in the next March, as they peck for waste corn in a remote eastern shore field, they will get up with their flock and fly north again.