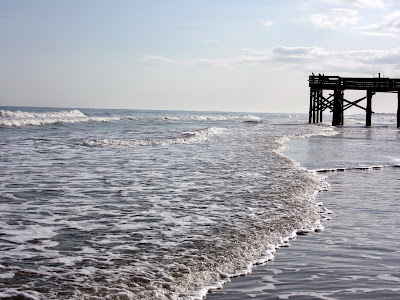 I'd be lying if I said I don't know how it came to this.  After surfing, for some periods daily, through the 1990s and early 2000s, I found a boss who didn't give a crap about my love of fishing, surfing, or hunting on weekdays.  Then, I moved into the nonprofit sector (more work for less money), which required me to teach night classes at community college for seven years, which didn't really add up to much spare time when we decided to, you know, have a baby.  The last time I surfed was five months before his birth.  And now it's five years later.

I finally got the raise and promotion I needed to quit my second job (and pay all my bills on time!) in early 2014.  It was a better 40th birthday present than you'd think.  But in arguably the busiest year of my 18 year career, I still didn't get to the beach to surf.   In June, 2014, we stayed two miles from my favorite wave in the Mid-Atlantic (a point break, no less!), but winds and toddlers didn't allow me the time to get away.  In December, 2014, Florida's west coast enjoyed two amazing days of waist-high surf while we were there.  I couldn't quite get it together.

Finally, in April, 2015, I made it happen.  The buoy for Isle of Palms, SC was reading 2.3' @ 7.1sec, SE (straight onshore) on the incoming tide, with a 0kt building to 10kt  S wind (sideshore).   Low tide was right at dawn, giving me another hour of flex time to get my wife and son to the beach.  The ride over to the island was foggy and quite frankly, a bit sharky.

I paddled out through the fog and found a weird current, extremely shallow water, and closeout waves.  Sigh.   I somehow made the paddle, and the dropin, on the first wave I tried.  It wasn't attractive, I'm sure.  I made the next five waves, trying to find a shoulder to give me a fair ride.  My weight really bogged down my old board, ultimately resulting in a busted center fin and a nose ding - both from shallow bottom turns.  A few other surfers were out; I was definitely the oldest and fattest, and the only one not using a longboard.  Talk about "unforced error." 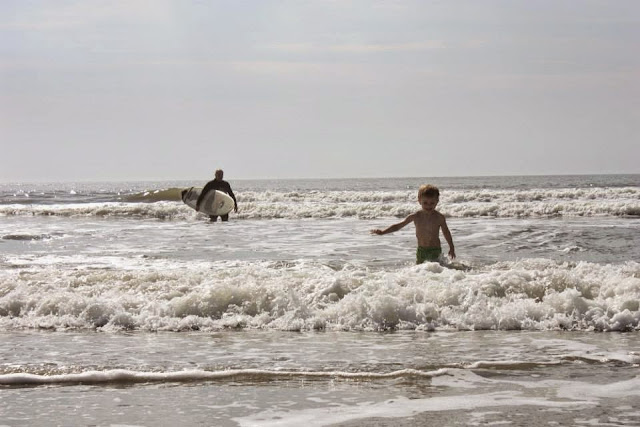 My son, who historically runs for miles up and down the beach, sat and played quietly while I surfed.  It was uncanny, and welcomed.  After awhile, I paddled in and he greeted me in his wetsuit, wanting to be pushed into a wave.  the current and the fog definitely scared him, but he did his best. 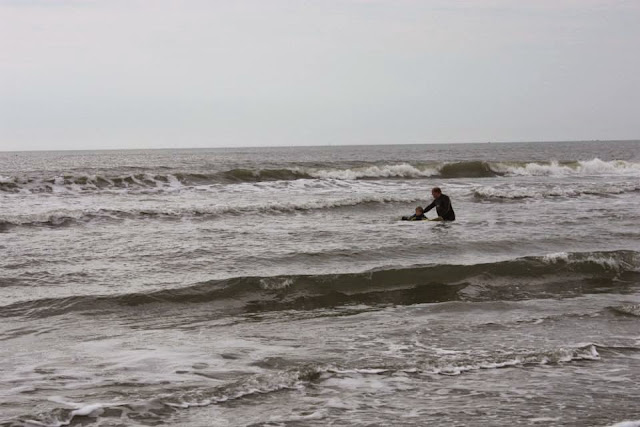 Congrats on getting out. The feelings of old had to be consuming

Next time you're in the area, check out Folly Beach on the south side of Charleston. Place of choice for the locals.

Mark, Folly is definitely my favorite in the area - travels found us mostly on the other (north) side of Charleston on this trip.