Streams have been in the news quite a bit over the last several months.  Just today, I saw an article about additional trout stream designations in Pennsylvania - a legal change for many small waters that would "protect" them from "impacts."   In the details of the article is the reality though - the designation provides for greater mitigation - not prevention - of impacts to these streams.  The US EPA's much-embattled "Clean Water Rule," currently under attack by at least four Congressional bills, opines that by designating more ephemeral/dry streams as "Protected Federal Waters," that clean water will be protected.  It's impossible to ignore that without protecting the footprint of streams, that eventually those streams might be obliterated with changing land use.  That much is true. The footprint of streams should be Federally Protected.  It makes common sense, until one realizes that the US EPA approves between 96-99% of all landowner requests to destroy Protected Federal Waters.   And that EPA has never, once, achieved a "no net loss" of American streams, if they are even calculating the rate of loss.  No one would argue with the fact that we have fewer miles of Federally Protected Streams every year.  But most of this loss occurs under the EPA's guidance.

So what does stream "protection" mean?  Generally, it means that government permits are required to alter the flow of the stream, place it in a pipe, conduct construction over top of it, or simply pave over it.  In some cases, a "mitigation" project is required to offset the damage to that particular stream.  In other cases, "exemptions" and "waivers" are provided, because in the United States, landowner rights must be balanced with public interest (protection of interstate waters).  These stream laws, though, only protect what is below the bank of the stream - the footprint of the stream.  Upland areas nearby the stream generally do not enjoy serious protection that can't be undone by waivers and exemptions.
What does that mean?  Below is a satellite image from Google Maps, showing a stream that is protected by federal, state, and county laws from being impacted. 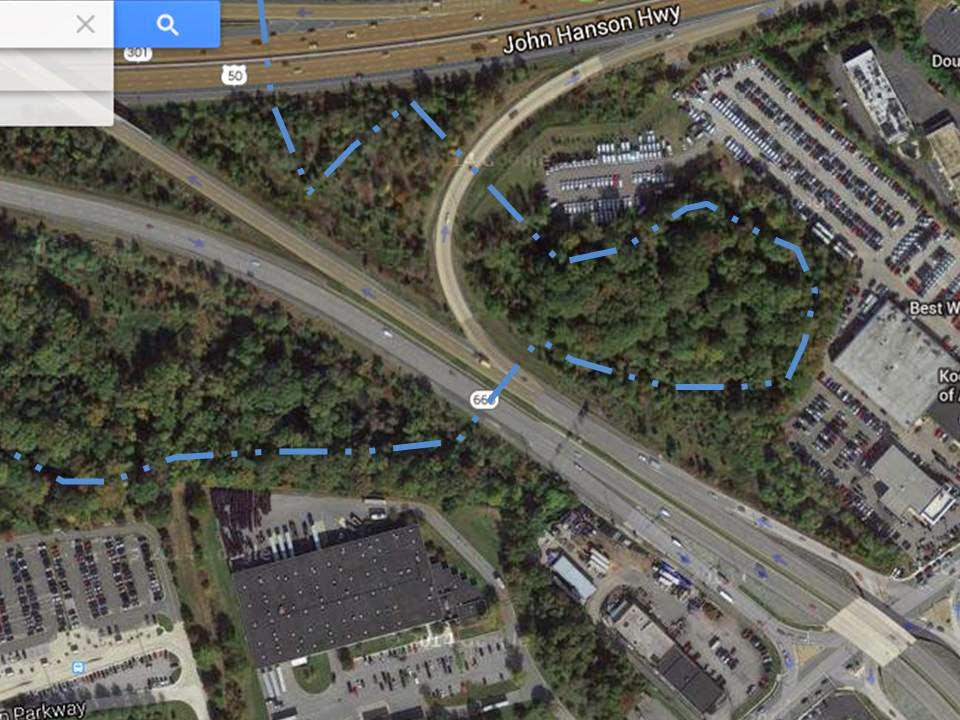 Yes, other than two sets of pipes, this stream was protected from adjacent land uses.  Developers stopped their projects outside of the stream.  And BRAVO for that -honestly.  Since there are trees, and since the federal, state, and county government agencies have deemed it "protected," you're probably imagining that it looks like this: 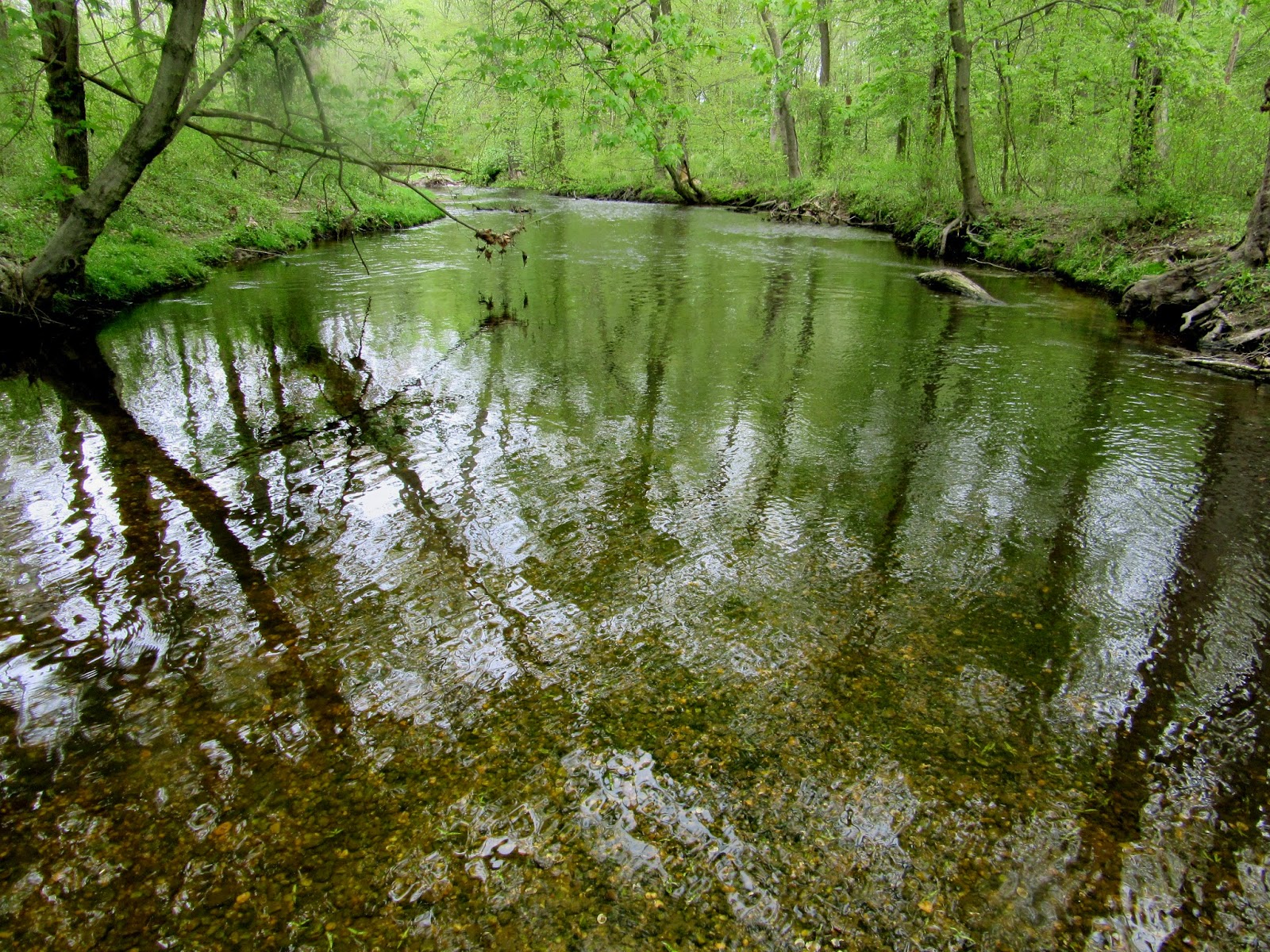 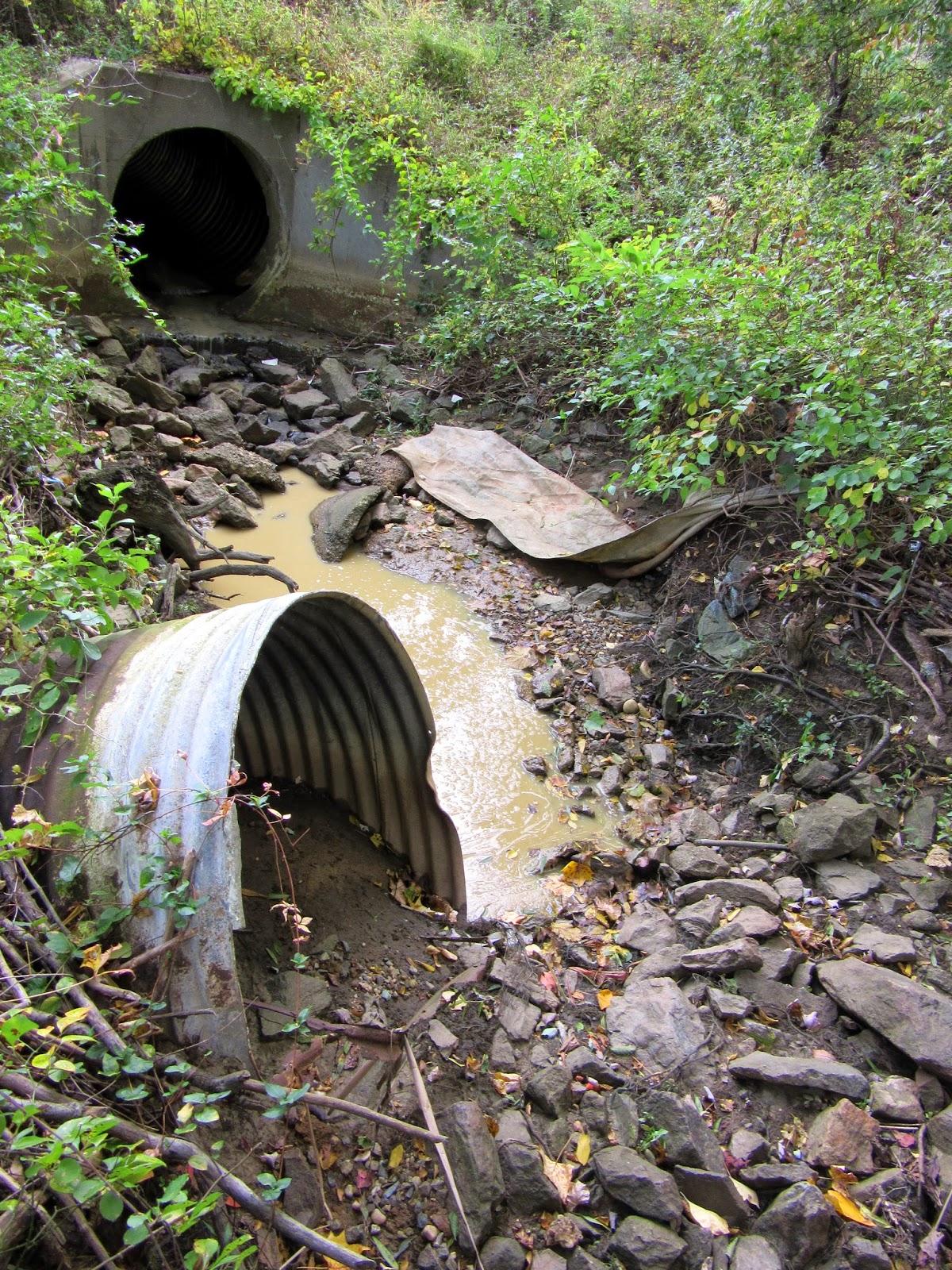 The reason for this is that the stream protection laws (remember, this is a Federally Protected Stream) do not impact, and in most cases cannot legally impact private land development (or highway construction) that occurs uphill.  The commercial land uses uphill have used this kind of material to fill in the stream's valley over the last 100 years: 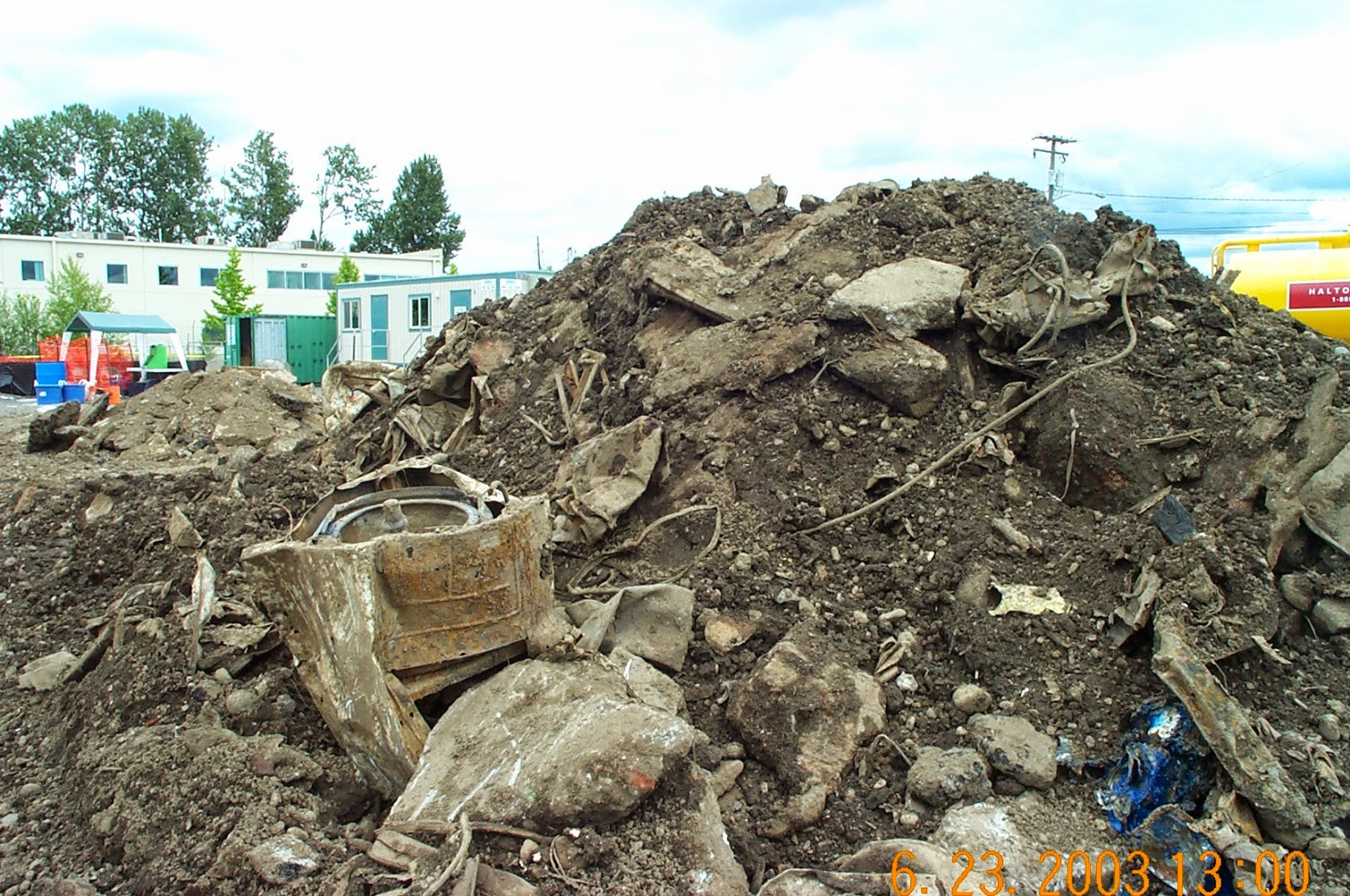 Piles like that contain garbage, metal pollution, plastics, and concrete, which of course can change the chemistry of nearby streams by itself.  And on farms, well, here's a Federally Protected Stream running through a farm (Photo Credit:  Outlookseries.com) : 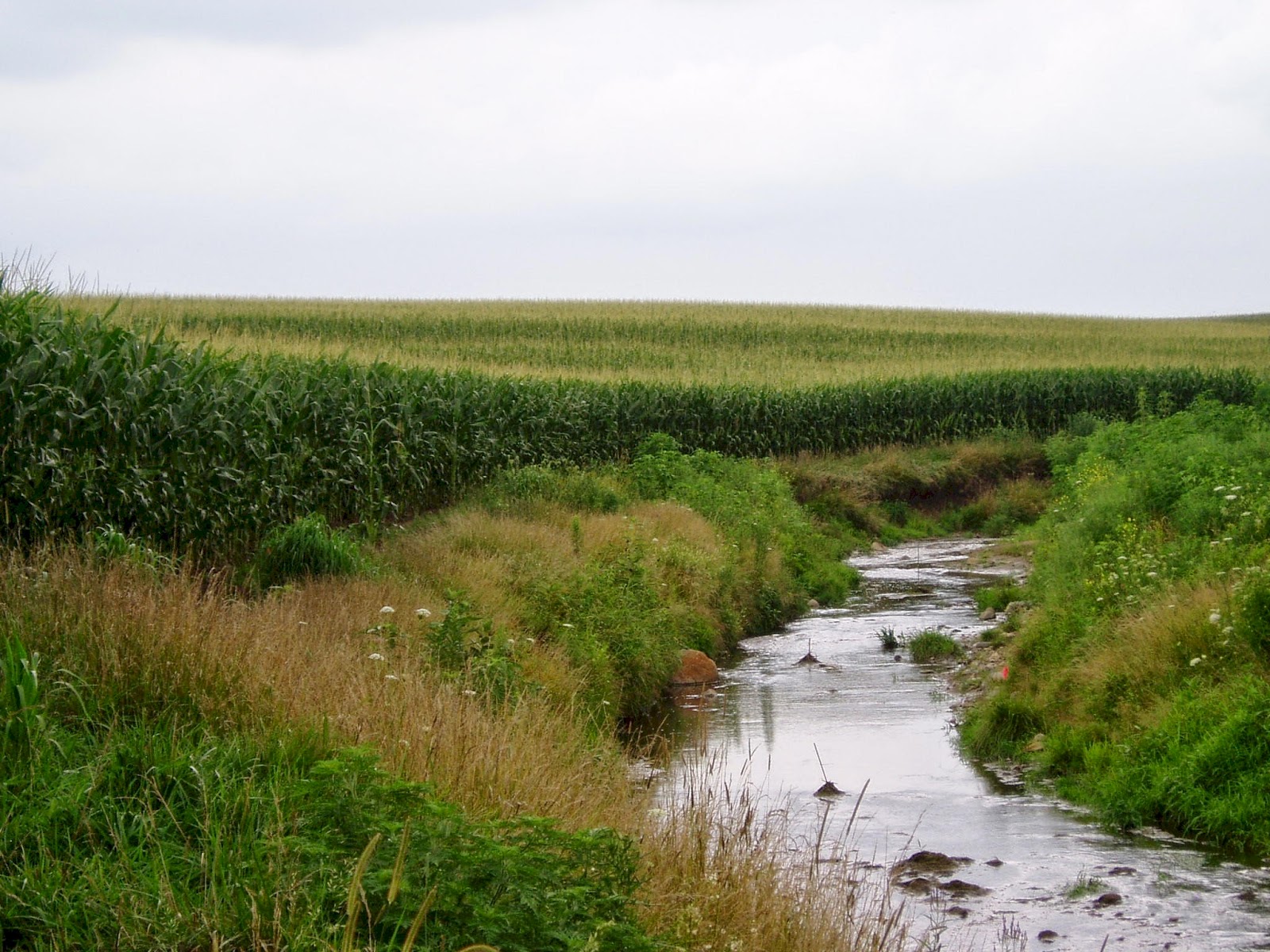 Guess what's in that corn?  Pesticides that can travel a half mile to water and kill stream insects.  Sediment that chokes out valuable water plants that waterfowl depend upon. Roundup.  Literally tons of Roundup.  But hey, we have Federally Protected the stream - so all is well, right? How many high quality fish do you think live in that stream?

America's environmental protection mindset has a dirty secret that, like most dirty secrets, seemed like a good idea at the time.  Federally Protected Streams are tracked in linear feet, not quality, and not in sustainability.  Federally Protected Wetlands are tracked in square feet, not quality, not for the amount of wildlife they support, or the uniqueness of their plants.   The problem with this, and with many natural resource protection laws, is that they look at the protected resource as an independent part of the landscape, when in fact, it is not.

The fact is that simply protecting all of the water will not protect many, or any, streams.  The fact is that requiring a 10 foot - or 100 foot - tree buffer around streams (something that federal and state stream protection laws do NOT do, but County laws CAN) won't hide the impact that 100.5 feet upstream is a 90 acre shopping mall with few or no stormwater controls.  Don't mistake the basic fact that if we fail to protect our waterways where they exist, they simply will fail to exist. That in itself is a valid defense for stream protection laws.

But it's important to understand that just because we put a fence around a stream or wetland, we may not have "saved" a whole heck of a lot.  Maybe, one day, we'll start to understand landscape and ecosystem function, and start having more dialogue about what it means to save the integrity of a stream, and not just its footprint.  Here's another picture of the Federally Protected Stream shown in the satellite image.  I wish someone would tell the dead fish and amphibians not to despair - they are afforded every possible protection of the Clean Water Act. 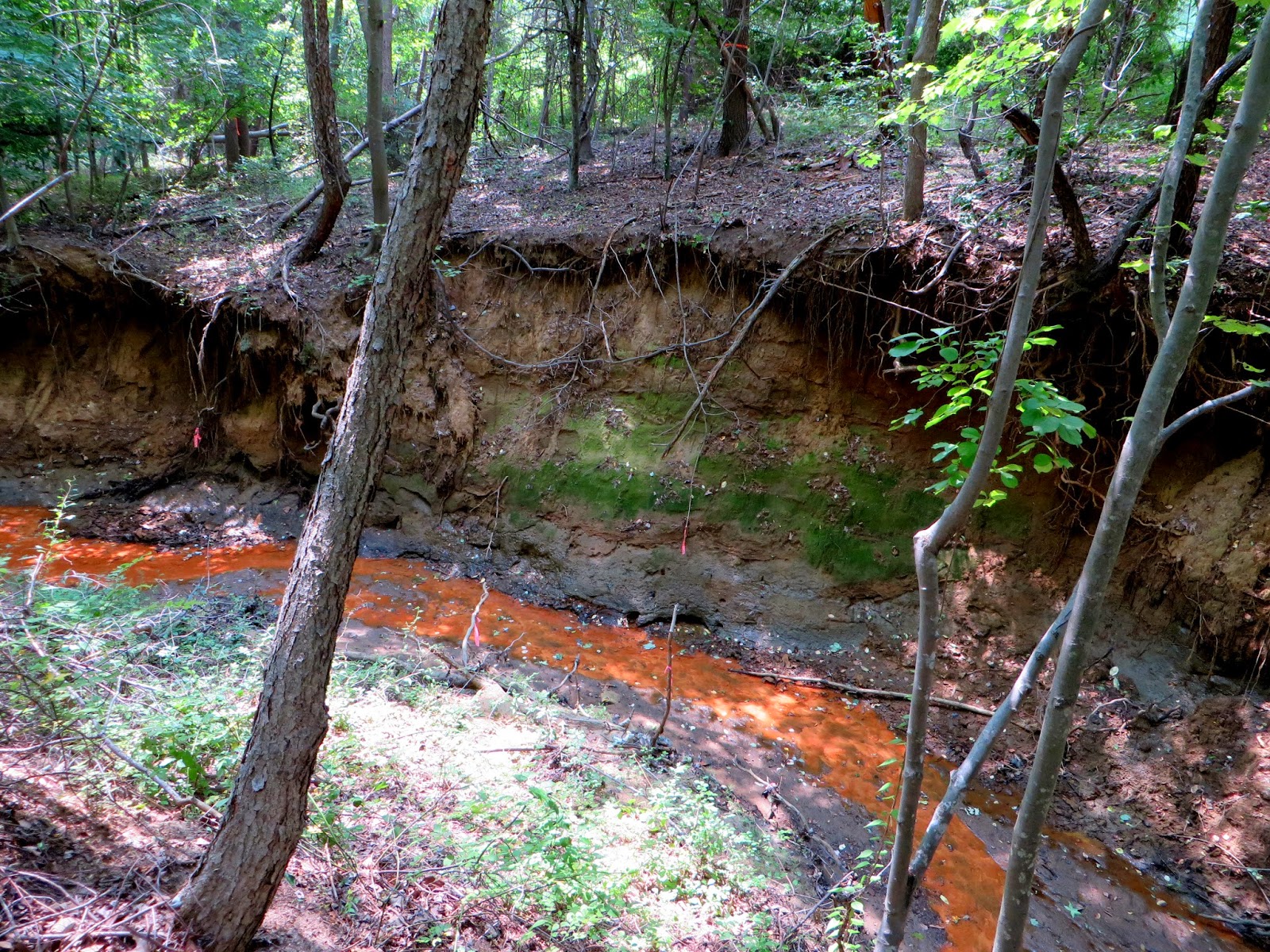