New Outdoor Friends at 40 (And Beyond)?

Aside from being exhausted and having to constantly work on my weight, being 40 is pretty cool.  When I encounter problems that just a few years ago caused me fits (and loss of sleep), I just knock them over and continue on my way.   But as most parents know, especially those without the benefit of local parents of their own, it can be a lonely time too.  All of our old friends have kids now, too, which means that most of our time together is "kid time together."   Despite the fact that many of us have known each other for the better part of two decades, have drank together and traveled together and everything else, we only get time to talk about adult stuff inbetween "DO NOT THROW BRICKS AT HIM!" and "IF YOU JUMP OUT OF THAT TREE, I'M NOT TAKING YOU TO THE HOSPITAL!"

And of course, there's the reality that most of us have changed a bit in 20 years, and if it were not for workplaces-in-common and kids-in-common, we probably wouldn't be as close as we are.   The logical next step is to admit to ourselves, "Each of us needs some new friends."  That sure sounds easy.   But of course, your new friends probably have kids of their own to manage, and probably old friends of their own to manage.   Now that most everyone at our age is either a "director-of-something" or a "manager-of-something," free time is at a bit of a premium.  So where is there to go? RETIREMENT.  At some level of seriousness, it seems like a common denominator in making new adult friends is whether you have been able to retire with a pension.   I don't have a pension and probably won't be able to retire until 75 (2049 or so), so I don't think I can wait for that.

This is where this blog post becomes basically useless - the answer is that I don't know how to do this.  The "new grownup friend" gig is not dissimilar from a romantic relationship in that both people have to be willing to sacrifice some quality time to build the relationship.   Hopefully, your kids are compatible; that seems to help.  The photo above is from a local, Sunday morning kayak trip with a new friend of mine.  "New Buddy" and I got very little real adult time together but we shared a fun memory with the kids, which is a cool thing indeed. We've known each other for years but hadn't spent time together until recently.   And I've put in less effort than New Buddy.  We make plans, I hedge toward bailing out, and he pushes me to keep my commitments.  I normally am not a flake.  I'm just busy and tired - so is he.

But as I finish writing this, I'm sending him a FB private message,

"Got any flexibility to fish this week?"

Let's see how it goes.

What it Costs to Build Summer Memories for Kids

Since I've been lacking words for awhile, I'll keep it short.  I'm reveling in my dedication (or luck) in providing great memories for my son outdoors.  Sure, I'd love it if we could float the Poudre together, or fly fish the Abacos.  But who needs all that?  On the other hand, my failure to be able to take my kid hiking in Peru doesn't mean we have to sit around and watch TV this summer.  Neither do you.

A Shenandoah Weekend I Didn't Have to Plan


I've learned from observation of my personal life, as well as from some recent leadership training, that people seem to think I have decent ideas, and are willing to follow me, even if I am unclear about why my idea is good (one of my shortcomings is explaining that to others).   At age 40 (plus),  my wife and I will slap down a deposit on a vacation rental, and magically the bedrooms will fill up with friends.   Unfortunately, it's been the case that if my wife and I don't slap down a deposit, the trip doesn't happen, because everyone's busy and few people have the initiative to do such things.  I was sad and frustrated to hear at a kid's party in February, "Hey, did you guys rent that beach house again?"  I was like, "No.  We've been busy and we hoped somebody else would do it."  Didn't happen.  In alternate versions of this story, friends will rent a house with too few bedrooms, beds, and toilets, 35 dogs, and 16 kids, and hope that the adults are drunk enough that we do not murder each other.

Then I heard in March that my brother T had slapped down a deposit on a 5-bedroom house on the Shenandoah River, with the invitation, "Just come."  Strategically located 3-4 hours from each of us three brothers, it was an easy trip.  As we grow older, the 8, 9, and 10 hour road trips with kids and dogs are exhausting, and need to be buffered with a week or more of vacation, which none of us have available....so we don't go.

Magically, the act of reserving the giant cabin netted 3 brothers, 2 wives, a fiancee', 2 kids and a dog. It was a good time.  No one fought except kids (briefly) and we caught a lot of smallmouth, and had our fair share to drink.  My family's contribution was to lead the "food/menu" portion of the trip, which seemed to reduce confusion and keep everybody full of happy camp food.    There were many highlights of the trip, but photos talk best sometimes.  I didn't even take pictures of fish I caught.  I just kept catching fish. 2015 has been harder than it was supposed to be, and it was great to get away for a few days. 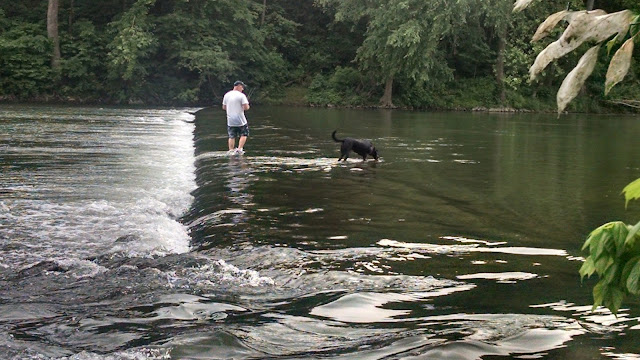 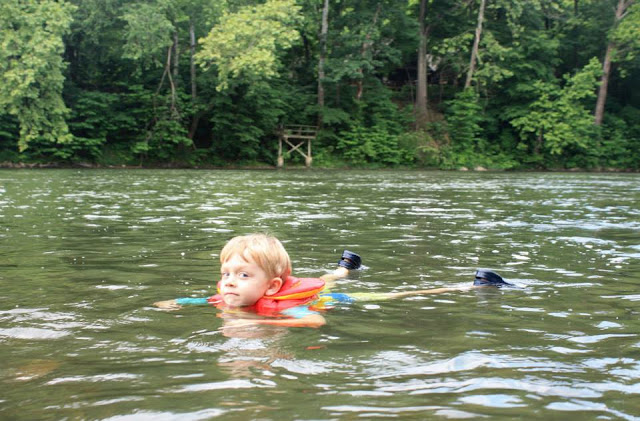 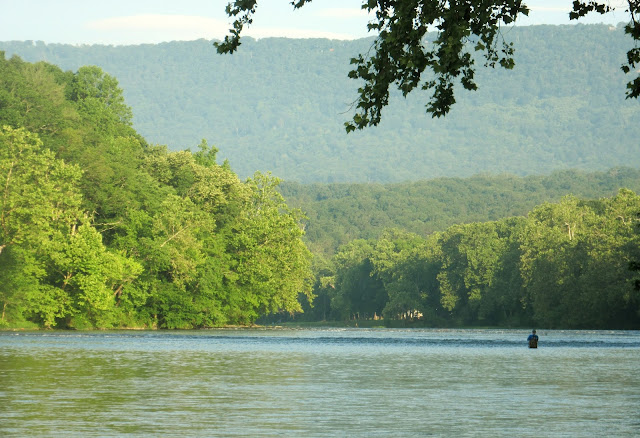 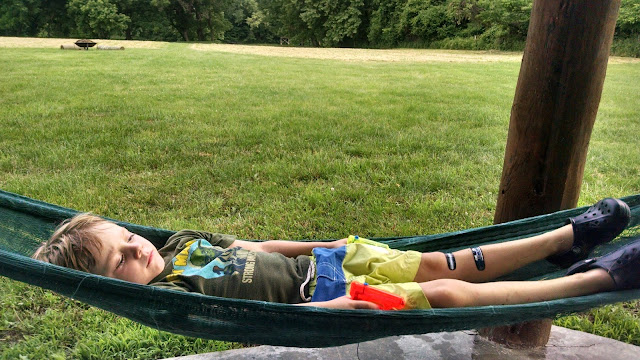 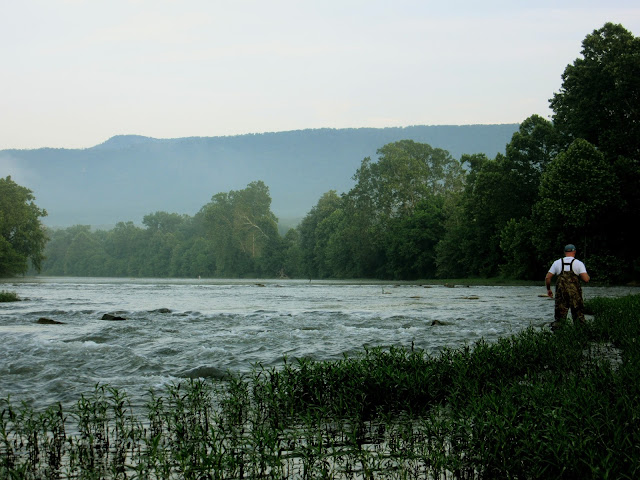 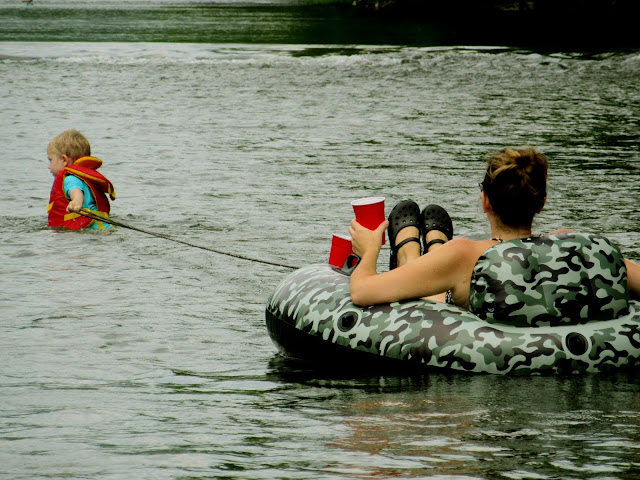 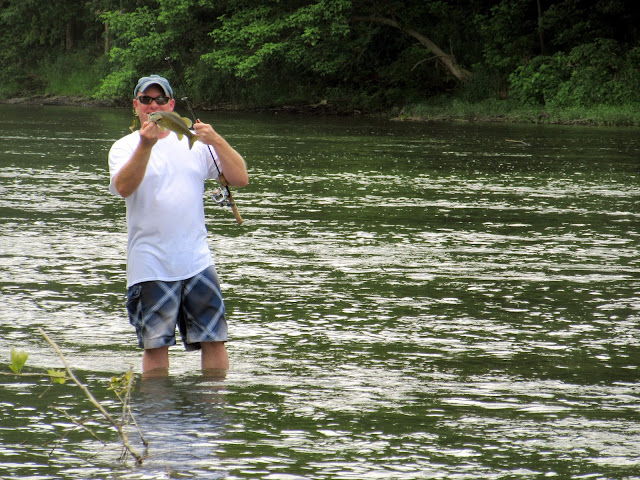 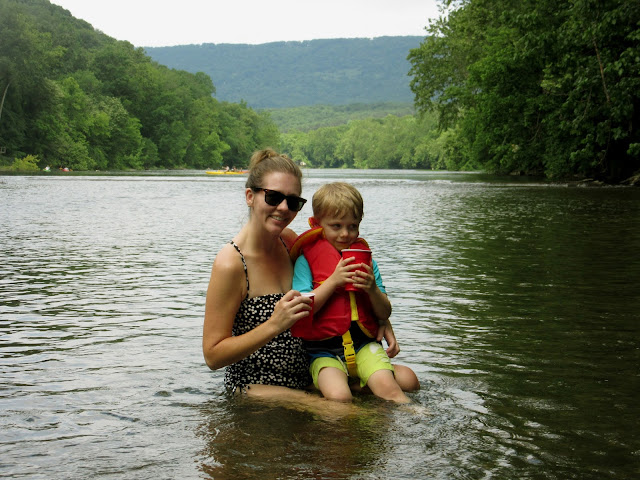 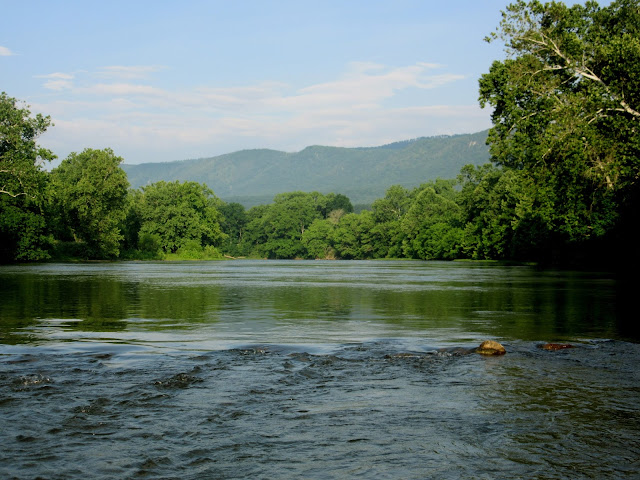 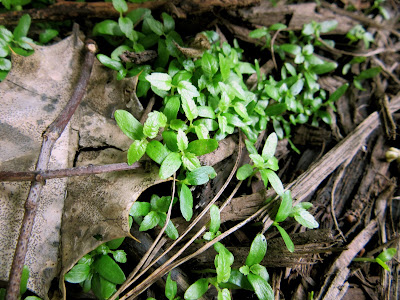 These are black mulberry seedlings.  Every Memorial Day, purplish black mulberries rain onto our deck and yard, splattering.  The birds, opossums, raccoons, rats and squirrels feast for the first four weeks of summer.

What are left are millions of mulberry seeds, whose seedlings emerge like a carpet in our yard and garden about two weeks after the berries finish falling.   By the time they emerge, their primary root is 6 inches deep, taking advantage of every resource the soil has to offer. Getting rid of the seedlings is a chore in aesthetics.....you see, they have a nearly 100% mortality rate.  The mulberry seedling that survives is off by itself, in the shade of a garden plant, not competing with its genetic counterparts.

I work in very sensitive areas - urban, degraded ditches, streams, and wetlands.  Our team puts a nearly nonsensically large effort into treating our work sites with respect, and complying with Maryland's legendary and labyrinthine construction and environmental regulations.   When conflicts between government agencies, nonprofits, and landowners arise on these sites, the conflicts must be addressed.  I've spent almost 20 years doing just that, and yet, I was caught off-guard in January of this year by an allegation that while we had follow the letter and spirit of the law on a large job site, that it "might not be enough."

I still don't know what that means, but I spent six months at work and in my mind trying to sort out how we might rebut some very serious but indirectly delivered accusations from government scientists who don't read a lot of scientific literature and aren't interested in a debate.  Two days ago, some good actors representing the US Army Corps of Engineers came out to the site and worked with us to create a solution that would educate everyone (including me) as the site's recovery continues into the next several years.  The Corps themselves will buffer our work against the government staff who accuse us, but refuse to confront us.

The effect that this prolonged, obscure, un-solveable conflict had on my attitude, my creativity, my writing, and this blog was pronounced.  Through that period, I learned for the first time that the single emotion from which I cannot create new, good work is "fear."  Like most people, I can write in anger - though it should be advised against.  I can write from love, from joy, from confusion, from exhaustion.  But fear of an unknown resolution of a new type of (indirect) conflict.

My brain, constantly brimming with ideas that develop without much real work, turned, in anxiety and fear, to a landscape of mulberry seedlings.  Tiny ideas, most of them useless, all of them buried deep, all of them going nowhere.   Biological and creative dead ends.  I'm hoping that this week's change in political winds will bring me back to a creative place, and a place where I'm taking time off to spend outdoors.