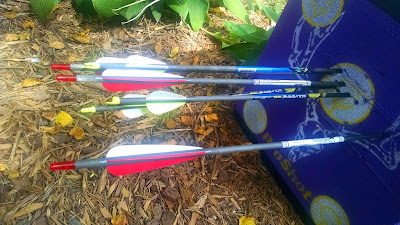 Are you one of those hunters who just rolls into September archery season - grabbing your bow off the wall the morning of your first hunt, and *maybe* washing a pair of jeans in scent-free detergent the night before?

Well, usually.  Since my wife was pregnant with our son in the summer of 2009, I have blown off really important parts of preparing for the surprisingly taxing conditions and demands of September and October hunting.   This summer I tried a different plan, picking up the bow in July and working with it at least weekly, getting my clothing worked out (and separated) a week before the season, and getting my stands, blinds, and shootings lanes prepared far in advance of the September 11 opener.  Here's a few tips for getting ready - now's the time to start!

1.  Get legal!  Go ahead and knock out licenses, permits, and landowner permission.  Don't bait (and remove bait now) if it's not allowed.  If you need to post the property, paint stripes on trees, etc., now is the time to do that.

2.  Check your climbing harness.  See anything disturbing? Rusty? Chewed up?  This is the time to fix it, not after work, the night before your first hunt.  You know, that routine when you stop by your favorite sporting goods store....and nothing's in stock.  For example, I took advantage of a coupon to Eastern Mountain Sports and changed out my rusty carabiners for high-end rock climbing 'biners last month.  Now it's done, with an entire week to spare!

3.  Check your weapon.  All the parts present?  Bow string dry rotted? Peep sight crumbling?  Best way to determine any of this stuff is to shoot.  A lot.  Again, the night before your first hunt is not the time to be shopping for a new bow string, and we all know someone who has done just that.   In 6 weeks of practice shooting, I've learned a bunch about my now 14-month old primary bow.  I learned that $4 arrow shafts shoot as straight as $10 arrow shafts.  I've learned to take the extra 15 seconds to dig out my release, because one day while target shooting "for a few minutes", my fingers slipped, the arrow flew, and thank God nothing horrible happened with a loose arrow off-target downrange.  Most importantly (see arrow above), I learned that I have really, strongly sighted in my bow at 10 and 20 yards.  Hallelujah.

4.  Check your tree stand.  I left my two tree stands out in the weather over the last year.  Just never got around to pulling them down.  To give myself a little credit, I have no space to store them at home over the summer.  So they are rusty, loose from the tree, etc.   One stand earned another two ratchet straps and two standard straps. Another stand feels clunky to transition from ladder to stand, so I ordered a second tree strap which I'll leave above the stand.  This will allow me to quickly transition (using my new carabiner) from the strap around the ladder, to a strap around the stand, roughly 4 feet higher.   The $17 change will reduce the time I'm unsecured, 33 feet up in a tree, from roughly 40 seconds to about 6 seconds.

5.  Stash your clothes.   Get a bin.  Fill the bin with your clothes that have been washed with scent-free detergent.  Close the bin.  If you feel it necessary, add a "fresh earth" or "white oak acorn" disc from Hunters Specialties based on what's more appropriate in your hunting area.  If you don't have $11 for a storage bin, a 75 cent *unscented* trash bag will do just fine.

Here on the coast, September can be a time of swatting mosquitoes in the tree stand and wondering how hurricane winds might affect deer movement.   Waiting for the cool days of October is an art of patience, but one that might also be rewarded with a September deer harvest.  Good luck - be safe!