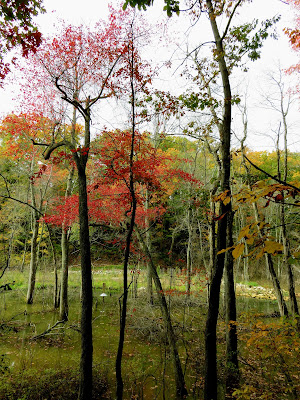 I was ready for this hunt, two days before the hunt.  I am happy how I've grown (as an adult, really) to be able to calmly and confidently get out the door in the middle of the night, knowing that I'm prepared and that I usually didn't forget anything.  Full disclosure, though - I forgot my gun on a goose hunt last year.  True story.

But I digress.  Despite a big moon, it was as dark as it could be in the woods and I was frustrated by how many times I had to turn my headlamp on.   As always, I heard some deer move as I was getting to the stand.  Within a few minutes I was in my place, bow hanging beside me in the dark.   No big deal.  Very dark, about 45 degrees.

A doe came up the ravine below my stand and was softly bleating.  No other deer responded and I never saw her, but she was there.  All the leaves are still on the trees, which doesn't help matters.  Around 30 minutes after sunrise - roughly the time I had a deer under my stand during my first hunt this year - a 4 point buck came up the ravine, I suppose trying to find that doe.  He was off to the hard right of my tree stand and under heavy cover, including downed trees; I never felt like I had a clear, confident shot at 25 yards.

Again, taking a cue from other situations in adulthood, I stayed cool and about 20 minutes later, he reappeared to my left - where all my best shooting lanes exist.  Time was getting on in the morning, now about 8:30am.  I hoped he would swing down the hill to the network of deer trails near my stand, but he kept  his distance at about 50-60 yards on the ridge, and slowly worked away from me.

I stayed in the stand until about 9:15am and had to go to work.  Not surprisingly, on the walk out of the woods, I encountered the 4 point buck, who was lazily working his way back to my position.  He bounded out of there pretty quickly.  Then on the drive out of the property, I saw Big Boy again - a handlebar-racked 9 or 10 point buck who I last saw under a pine tree on a rainy day in September.  He saw me and lept off, right up the trail to my tree stand.

Next time, I'll stay a little later in the tree stand. Cancel my 9:00 appointments! 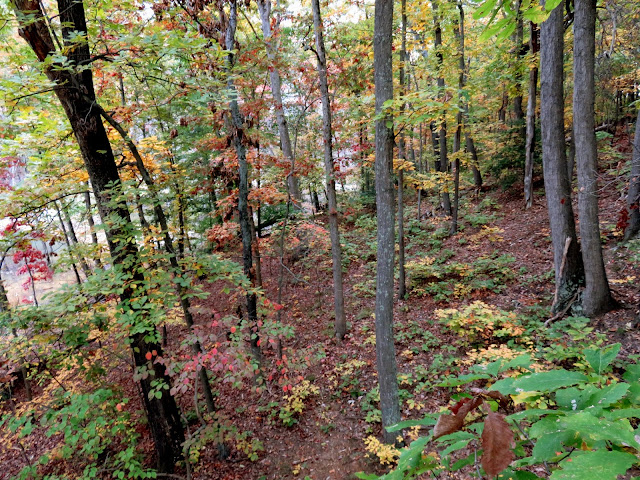