I Got A New Bow, I Got the Old Weather 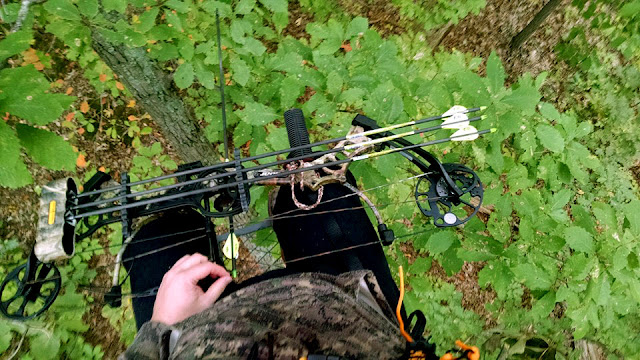 Packing my favorite compound bow up to be transported out to the Nebraska Sandhills (more on that to come - trust me!), I was faced with an important choice.   Although I've bow hunted for almost 15 years, I just fell in love with it last year, and I prepared well this past summer to have a successful bow season this year.  So, what to do?

I set out about 15 minutes late in the morning, the temperature already an aggravating 64 degrees.  A cold front was predicted to roll through around 9am, and I hoped that the cloud cover was already in place, above the warm fog on the ground.

I made it into the tree without incident and settled in for the morning.  Acorns dropped like stones.  As the sun rose, I thought "well, that sky seems a little blue," and it was.  A beautiful blue sky was revealed a few minutes later, and the woods came alive with blue jays, wood ducks, and squirrels, all staking claim on this year's heavy acorn crop.   But no deer - surprising for this forest.

The temperature rose to an eye-rolling 70 degrees before the clouds arrived and the wind blew a bit, dropping the temperature back to about 62 degrees.  And that was it.  By the time I climbed out of the tree at 9:40am, the temperature was on its way back up to 76 degrees.  The deer never moved, and why would they? Warm skies and food falling all around them.   But I'm happy with how I've hunted so far, and I think things will turn my way soon. 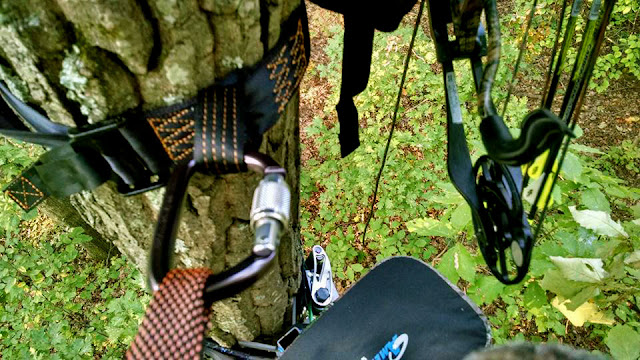