Mens Underwear for the Outdoors - A Gear Review

I have to admit, reviewing underwear is infinitely less exciting than reviewing a $600 fishing reel.   And let's face it, before the first time you missed a day of kayaking in Peru due to jungle rot, or the first time you nearly froze to death while deer hunting in cotton camo pants and cotton-blend boxers, you didn't care about underwear.  Neither did I!  But now I do, and I think most of you do as well.

Two things (beyond "not freezing to death" and "not loving moisture-driven infections on my skin") drive me to pay attention to underwear.  First, I spend a lot of time outdoors for both work and my personal life, and I hate being uncomfortable when it's not necessary.  Second, I don't like missing an outdoor adventure being of something dumb, like cheap underwear.   If you haven't had the wind whip through you (all of you) and your cheap clothes, or if you haven't had to work all day in clothes that got soaked in rain, pond water, or sweat at 830am, then you might not get what this is about, and that's OK.  This review isn't for you.  If you're in that category of men, by all means, carry yourself to the nearest super store and buy yourself a 3-pack of whatever drawers are on sale.  There's usually red, black, and blue in every pack...you know the ones!

I forsake cotton a several years ago, and bought my first nice pair of underwear in the Eastern Mountain Sports store next to my gym at the time, about 4 years ago.   I've been a member of three other gyms since then, but those underwear - the initial release of Ex Officio's Give and Go boxer briefs, have been worn about once a week for four years.  They're tough sons-of-guns, and for $22-25, they had better be.   I've since tried other brands, with varying success.  The review below addresses some of the high (and dry) points, as well as some of the damp challenges.

The overall review consisted of whether the product functioned as follows:
Gross? Gross.  But read on, here's what I found. 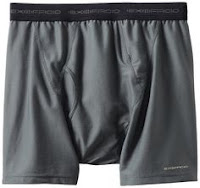 The Ex-Officio Give and Go ($22-25).   This has been a well-received product, experimental in 2011 and a success for Ex-Officio.  It's advertised to be good for 17 days in 7 countries without a wash, but I'll pass on that.    These underwear are manufactured comparably to the high price.  The waistband is sturdy and not prone to fail, stitching holds after dozens of uses, and they carry sweat away like a dream!    They do bleach easily in pool or laundry water, so be careful.   My favorite thing about these underwear is that I can wear them fishing, get them wet, change my shorts or pants, and these are bone dry in less than 45 minutes. 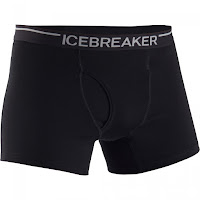 Icebreaker ($40-50).  I bought a pair of these off the rack at REI in Fall, 2015.  They are the most comfortable pair of underwear I've ever owned.    The waistband is weak and tends to get bound / twisted a bit, which is something I'm keeping an eye on, and like the Ex-Officio, I never feel sweaty in these.   After roughly 15 wears, the super thin merino wool blend is starting to pill in some areas, so I'm watching that as well.  I'll buy another pair of these, hopefully at outlet prices. 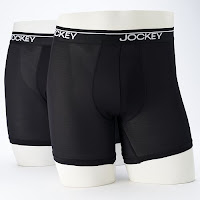 Jockey Air Boxer ($18-20).  Ranking at the lowest end of the price range, these underwear are surprisingly comfortable, have passable wicking ability, and have held up admirably for swimming, outdoor work in hot and cold conditions, and for everyday wear.  They do feel a little...bogged down...on particularly hot and humid days (around here, that's 105 degrees and 90% humidity).  All in all, I'd say that they're more than half as good as the icebreakers and less than half the price, making the Air Boxer a good deal. 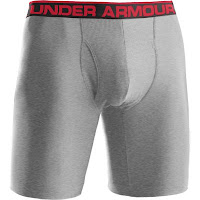 Under Armour Heat Gear ($20).  Now, you would think that of all brands, Under Armour's underwear would perform the best.   And in some ways, they are, but just not in the ways that I, and I think a lots of outdoorsmen, really need.  On the positive side, these underwear are bombproof.  Everything seems to be double- and triple-stitched.   The material refuses to tear, refuses to pill up, and doesn't even bleach when it encounters chlorinated pool water.   They are also the most supportive, which is great, but it means they are also the most constricting, which isn't great.  I was really confused and surprised at how poorly these underwear wicked away sweat.   On hot days, or heavy workout days in the gym, these are not the underwear I want to be wearing.   After fully wet (I took an accidental swim in my waders while wearing them), they didn't dry out all day, hours after I'd removed my waders and put lightweight shorts back on.

Summary.   I don't like being uncomfortable when it comes to underwear - I guess that much is clear.  While I am happiest with the Icebreaker Oasis, I simply can't afford to fill my drawer with them.  The Ex-Officio boxer briefs, however, are constructed and sold at that meeting point of price and quality, and in the process of doing this review, I bought my fourth pair of Ex-Officios.   You can't go wrong with most of these products, but there you have it.  Underwear.