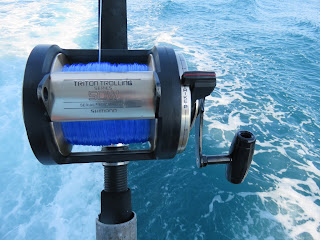 Earlier this year I was able to cash in on a personal favor and was able to join some friends for a 4 (ish) day offshore trip out of the Tampa area.    Those who know me and this blog know that while I fish a lot,  the average amount of time I spend fishing per outing is about 90-150 minutes and the average size fish I catch is 11" long, and it is a bass of some variety.  Going offshore is something I rarely do, and I've never been offshore overnight.  WHAT COULD GO WRONG?  I've been stymied to write about this trip:  there's how the trip was, and there's how I feel about it, which are two different things.  So for now, here's how the trip was.

We flew into Tampa on thursday morning, each with a full backpack (clothes, snacks, fishing tools), and an empty roll-on cooler (hoping to take home pounds of fish).  After an expensive stop at the bait shop, we rolled down to Hubbard's Marina at John's Pass.   I now know that Hubbard's puts a hundred or more people on fishing boats every single day, but I didn't know that when we arrived.  We found a bit of a cattle operation going on during check-in, but the staff was pretty courteous.   They did seem frustrated that we didn't know precisely what was going on, which seemed like a dumb thing to be frustrated about (you know....new customers).

Eventually our crew (three mates and Capt. Mark Hubbard) were assembled, and 14 of us loaded our small collection of clothing and massive assortment of bait onto the 75' catamaran.  By about 3pm, lines were on the dock and out to sea we headed. Around 11pm, we had settled on a reef several dozen miles offshore and I was one of the first successful anglers, pulling two keeper mangrove snapper onboard.

The night was filled with other adventures, including several other anglers getting on the board, and a nearly two hour fight (in the pitch black night) with what we were all sure was a swordfish, but turned out to be a 15 foot brown reef shark, which we released without handling. 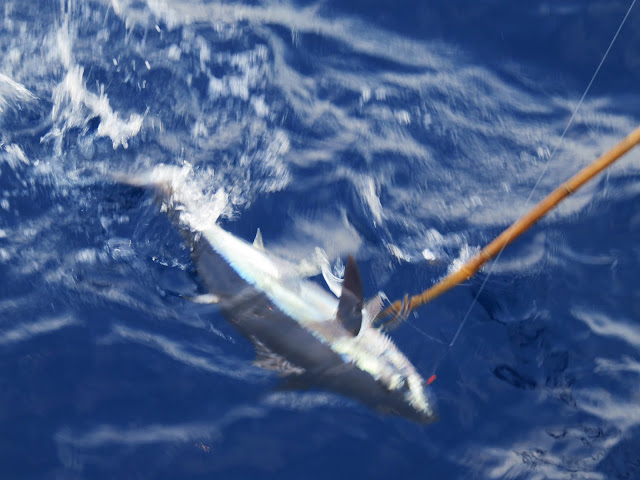 The next day of fishing was moderate in pace but almost everyone caught grouper, so that's pretty much a successful day in my book.   In about 800-1000 feet of water on the Middle Grounds, we caught Yellow Edge, Yellowfin, Gag, Kitty Mitchell, Snowy, and maybe one or two other species of grouper.   The elusive Warsaw Grouper was....elusive.   Two blackfin tuna were caught on light tackle, but not by me, so, hooray for those guys! 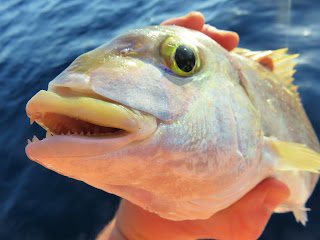 The third day of fishing was hot and heavy, though a mixed bag.  There were several hour long dead periods, followed by deepwater frenzies and fish flopping all over the boat.   We put a hurting on the Blue Line Tile Fish and a few grouper, but increasingly porgies were being caught.  Porgies are fine, but definitely not the objective of a trip like this. 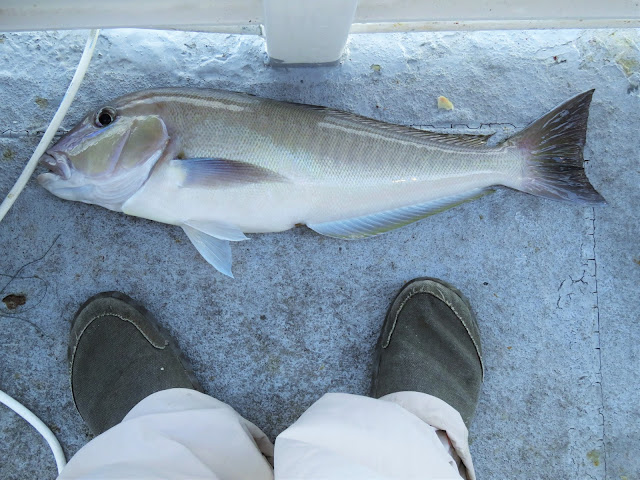 As the sun went down, the boat took a big turn and started back toward land, where we'd arrive at dawn.    The last day of our trip warrants its own story, between TSA crotch inspections and screaming matches about how to divide up the fillets (and dry ice) for air transportations, but this was a good fishing trip; we each came home with 30 or more pounds of the world's freshest seafood.  I don't know if I'll ever go on a trip like this again, but I'll never forget it, that's for sure. 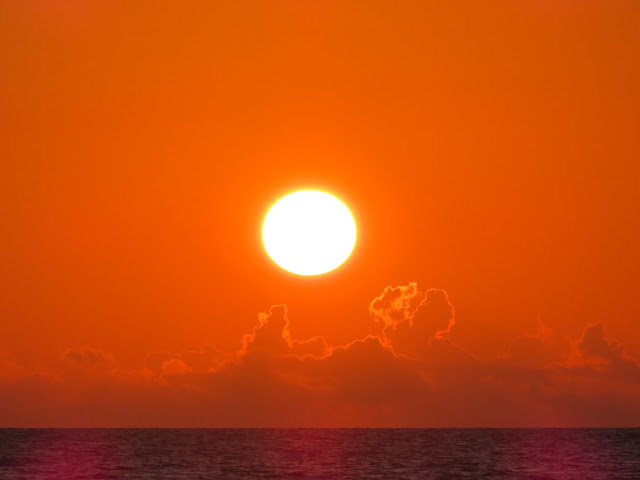