A lot of us know a lot of good parents.  Folks who show their kids the world, whether that is Central Park or Grand Canyon National Park.   You'll see pictures of kids fishing, climbing, shooting, catching frogs, looking through telescopes, making headdresses out of found feathers, and all of it's good stuff.   But you don't see pictures of parents doing "the stuff," which is pretty ironic because much of this outdoor culture - or at least the ethic, the part of the mountain air or the salt water that runs through our blood, so to speak -  is inherited, not learned.  Those parents used to do cool stuff.  But I think I'm typical when I say that I've hardly had a picture snapped of me hunting, fishing, surfing, or climbing since my son was born.   I'm in a support role, a coach's role now.   Sometimes I try to remember what it used to feel like to go pursue these activities unencumbered.  To kick ass.   It's hard to remember when that time was (if it ever existed, ha ha).  But sometimes life gives us amazing, wonderful, and priceless moments.

I was climbing with my soon near the PA-MD border recently and he said, "Let's eat our lunch on that rock table up there."  I said, "Well if we can both climb it, sure."   He, of course, scampered right up there.   I handed him the gear pack (of course, I pack in all the gear and water), then my phone and camera.   I then studied the 10' tall boulder for a minute and found what I thought were some jugs and foot holds big enough for a dude like me.    What I didn't know is that my son was waiting to take a picture of me as I was finishing the climb. 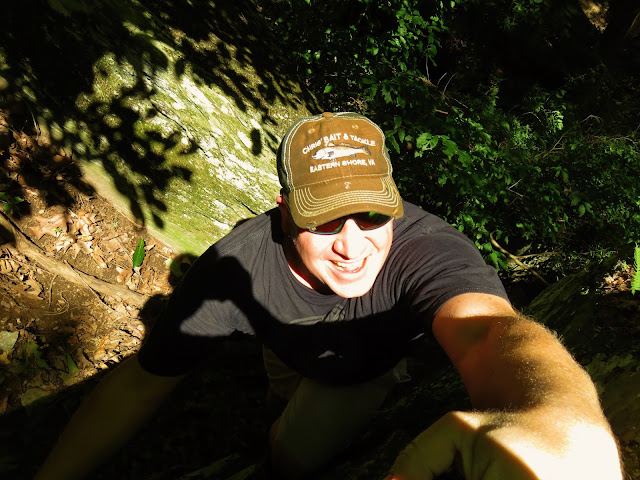 The clever thing with myths is that there is generally some component of truth to them. In any case, generally they bring us down that perilous opening of correlation. It has been a procedure for me to understand that there were things I was trying to that just weren't genuine in any case.